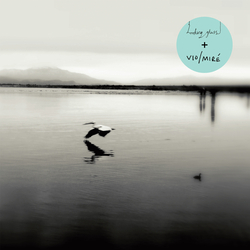 As split releases go, the suffused pairing of folktronica artists, Looking Glass and Vio/Mire, proves to be a congruous astute choice. Essentially sharing a yearning for “joyous melancholia”; both electric-charged troubadours arrive, pretty much, at the same destination: albeit from, seemingly, different starting points.

The first half of the EP is given over to Jim Wallis (drummer for the burgeoning UK band My Sad Captains) and his leftfield Ameicana imbued side-project, Looking Glass. Wallis’ unassuming, down-played vocals convey a sense of forlorn on both of his lyrically succinct kitchen-sink affairs. His opening offering, Infinite Wisdom, has an incipient breathless build-up of echoing, sighing cello and violin loops that break out into a finale of shuffling, marching drumbeats and caustic scratched background noise.  The second contribution, If You See Something, Say Something, has much more pace, but is brief – lasting only a couple of minutes. Wistfully exercuted with a bare minimum of props; this banjo plucking viginette begins in the Catskills before taking a detour and ending up in the OC country.

Creative soul-mate, Brendan Glasson may “hail fom the ever-fertile Providence, Rhode Island”, but he sounds more attune to the stoic lyricism of Scandinavia. Under the strangely cryptic moniker of Vio/Mire, his two mini-opuses follow a abstract pathway that uses a twinkling, plonking and teardrop droplet effected backline of 8-bit keyboards, and eulogy atmospherics, to push us along a naturally poetic landscape.  On the hopeful, nigh jaunty, Ivory Gull, Glasson uses his loquacious pallete to describe the scene, and the titles feathered protaganist: “The ivory gull too slow too large/ nears the iron hull of an ocean barge/ Or a simplified exspression/ a tired soldier’s final charge” – it looks like the gull in question bedecks the EP cover itself: a photo taken by the American photographer, Bethany Salvon (from her ‘The Beauty Of Decay’ series).  Glasson goes on to eloquently place memorable lines before a scenic momentum gradually mourns, “The slow decay of land by sea” – heartening prose indeed.  However the ethereal chiming tones, and ancestral harpsichord of Much That Could Be Found, prove enchanting and efficacious; taking you on a trip to another realm. Capturing the ambience of Eno and the tender, stirrimgs of Elliot Smith, his langour broody blanketd voice, dispenses keen observational thoughts, inspired by lovers escaping to the seclusion of some anonymous retreat that doesn’t end well: our narrator, despirited, turns his attentions to the, usually, inconsequential things that surround him to use as a metaphor, “It’s the way an old window pane/ gets thinner at the top/ Through mangled light/ like heavy rain/ the bids are eating trash again”.

Of the two, Glasson proves the more original and adroit, though Wallis’ plaintive musings have a minimalistic approach, they have an enduring quality that shows real promise. Both artists have released albums and EPs before, but this is the first time they’ve appeared showcased together. The Looking Glass and Vio/Mire EP is limited to only a paltry 250 copies on 7″.  Track down a copy if you can, and take in the sound of temporal, panoramic folk.