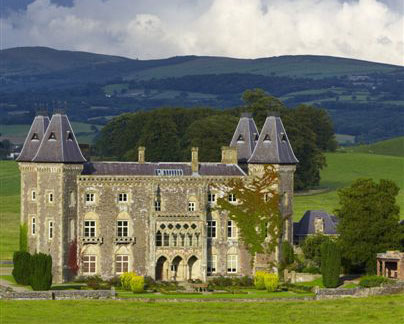 The inaugural Dinefwr Literature Festival a celebration of literary and musican endevour are bringing the likes of Howard Marks, The Brautigan Book Club (feat. Gruff Rhys, Martin Carr and H. Hawkline), Caught by the River (feat. Tim Burgess) Sir Andrew Motion and plenty more eloquent bookish types to the Dinefwr park and castle this summer between Friday 29 June – Sunday 1 July. This unique three-day bilingual festival will combine award-winning writers, poets laureate, fringe acts and musicians in a celebration of the written word and the mythical landscape of the National Trust’s Dinefwr Park and Castle in the heart of Carmarthenshire, West Wales. The festival promises an eclectic mix of high quality literature, music, comedy and visual arts from established names to up-and-coming new talent.Tickets are available from the website (from £25-65) below where you can also find full information on the event.

With its dedicated camping field, outdoor entertainment, stalls and excellent local food, the festival is set to be a top cultural destination this year, putting fun, family and a love of good literature at its very heart.

Caught by the River, a Port Eliot Festival favourite, will be delivering a mix of talks and music throughout the weekend. Guests include: The Charlatans’ Tim Burgess; Pat Long talking about the recently published History of the NME together with Matt Sewell; Richard King; Neil Ansell; Robert Penn and Jeb Loy Nichols.

Brautigan Book Club, which started out as a monthly night at the Bethnal Green Working Men’s Club in celebration of the American writer Richard Brautigan, presents a programme of performance, music and literary talks. A festival highlight is a sneak preview of Tonseisha, a production premiering next year inspired by Brautigan himself. Written by the award-winning LA screenwriter Erik Patterson, this is a live and recorded soundscape influenced byJapanese and American culture. Also on the bill is a performance by Super Furry Animals’ front man Gruff Rhys together with H Hawkline and Martin Carr.

Alongside the main literary events will be workshops, walks and unusual performances including Naughty Boys Storytime with Jasper Fforde, Joe Dunthorne and Ed Holden who will be telling family bedtime stories of mystery, mischief and adventure.

There will be a chance to experience the breathtaking landscape of Dinefwr Park; take a guided walk to the Castle with the Wildlife Trust, or embark on an exploration of local birds with travel writer Horatio Clare. The festival will also present a range of works by visual artists including: Jackie Morris; Anna Barratt; David Rees Davies; Penny Hallas, Katherine Bujalska and Lewis Wright, as well as a unique chance to see, up close, Philip Pullman’s original chapter-heading vignette prints from His Dark Materials.

Throughout the weekend Dinefwr will be packed with events by award-winning English and Welsh speaking authors, poets, travel writers, graphic novelists, playwrights and sci-fi and fantasy writers. Names include:

In addition, literature collectives theAbsurd, POETica, Jam Bones, Dal dy Dafod and In Chapters will be bringing their own blend of music, spoken word and live literature to the festival programme.

The weekend’s music is curated by SŴN’s John Rostron and BBC Radio 1’s Huw Stephens who together put on gigs year-round, predominantly in Wales. Along with Gruff Rhys, guests include Julian Cope, Emmy the Great, Georgia Ruth, Richard James, Gareth Bonello and The Staves.

Festival comedy comes courtesy of The Junket Club, and features sets from performance poet and musician John Hegley, the award-winning Simon Munnery with his 2012 show Hats off to the 101ers and celebrated comedians Tom Wrigglesworth, Josie Long and Celia Pacquola.

Children of all ages will be entertained for the entire weekend by a selection of vibrant authors. The line-up features: the award-winning Philip Ardagh and Jeremy Strong; Welsh television presenter, poet and rapper Aneirin Karadog, Where’s My Teddy author Jez Alborough, plus the author and science writer Mark Brake and rap artist John Chase who will explore the science and fiction of time travel and alien biology in the Science Fiction of Dr Who. Over the weekend there’ll be creative fun and games with the Hunga Munga collective whose slogan is ‘Make Stuff, Make Friends, Make a Mess’. Further writers include: Catherine Fisher; Catrin Dafydd; Eurig Salisbury; Huw Aaron; Jackie Morris; Jenny Sullivan; Phil Carradice; David Orme and Helen Orme. Kids will also recognise their favourite presenters from the popular children’s television show on S4C, Stwnsh.

Extracts from Aberystwyth Arts Centre’s The Box will be shown in the festival cinema room, with a diverse programme of performance, animation, narrative and humour from artists working in Wales, across the UK and internationally. Elsewhere, Small World Theatre will present their giant puppetry performance The Fisherman and the Mermaid.

Dinefwr Literature Festival is a collaboration between Literature Wales, the National Trust and the University of Wales Trinity Saint David (as lead partner in the Coracle programme).

Both weekend and day tickets are available for the festival. Adult Weekend passes are £65, with a discount for National Trust and Literature Wales members. Adult Day Tickets start at £25; children under 5 go free, and weekend and day tickets for children aged 6-16 are £10 and £5 respectively. Camping tickets are an additional £20 per tent for a maximum of four people sharing. Booking fees apply to all tickets.

Full details, including line-up information can be found on www.dinefwrliteraturefestival.co.uk

Tickets for the Dinefwr Literature Festival 2012 are available from Ticketline www.ticketline.co.uk/dinefwr-literature-festival