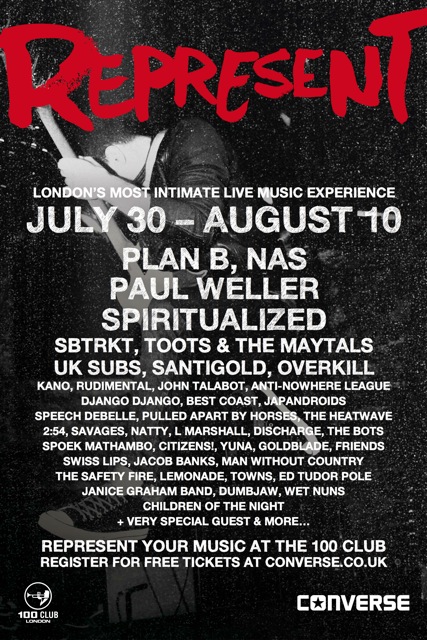 CONVERSE UK announces the launch of REPRESENT, a free summer music series that invites fans and artists to represent their music and celebrate musical diversity at London’s legendary 100 Club, the longest running popular music venue in the world.

From July 30th to August 10th, Converse will bring REPRESENT to life through the ultimate live music experience at the iconic 100 Club. With headline acts to include Plan B, Nas, Paul Weller, Spiritualized, Toots and The Maytals, SBTRKT, UK Subs, Santigold, Overkill, Kano, John Talabot, Django Django, Best Coast and other special guests, the free concert series will present nine gigs, featuring a total of 45 notable artists who have helped shape the global music landscape of the past, present and future. Since its inception in 1942, the 100 Club has been famed for its democratic celebration of music of all genres.  Following in this spirit, REPRESENT curates its widest roster of artists to date, giving UK fans a unique chance to see their favorite acts in an intimate setting.

“This month, Converse celebrates its one year anniversary of collaborating with the 100 Club and bringing the best in established and emerging music to UK fans,” said Cheryl Calegari, Senior Marketing Director, Converse UK. “REPRESENT takes our collective commitment to music to the next level by showcasing such a wide spectrum of musical talent and offering fans a chance to get behind the music that matters most to them.”

REPRESENT follows in the footsteps of the successful ‘Converse Gigs @ 100 Club’ monthly music series, which kicked off a year ago in June 2011. The MusicWeek Award winning program has featured leading acts such as The Rapture, Gorillaz Sound System, James Murphy, Ghostpoet and Graham Coxon and continues to champion new and established artists from a variety of genres to fans and their communities.