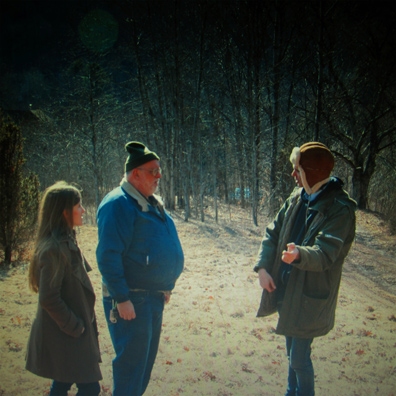 It’s easy to get jaded about the inner workings of the music industry. Not because the majority of new records sound duller than a commuter town (I’m looking at you, The Maccabees) and not even because of the depressing reality that of the 13 million songs on iTunes, 10 million don’t sell a single copy. No, it’s the press releases that come out with every new album, single and tour. The ones which take loquacious pride in spouting ream after kiss ass ream of hyperbole about how some new band, let’s call them ‘The Get Down Syndrome,’ have reinvented music by recording their latest (and by logical extension greatest) opus, using instruments carved from melted Astral Weeks vinyls. Only for the music to turn out to be more tedious than an overheard conversation about 50 shades of grey. So when an act as genuinely talented and musically distinctive as Dirty Projectors release a new LP, it’s most definitely cause for a little hope.

For the uninitiated, Dirty Projectors have been going the better part of a decade. The band, a rotating ensemble led by David Longstreth, have built a deserved reputation for musical innovation. Their 2009 album (and breakthrough recording), Bitte Orca, was a glorious study of masterfully interwoven vocals and deft production touches that was many critics choice for album of the year. It was the culmination of a body of work that is often compared to Frank Zappa due to it’s studious complexity.

On Swing Lo Magellan, their 6th studio album, Longstreth has paired back this approach. Simplifying the bands irregular time signatures, layered vocals and sweeping melodic shifts without harming their fundamental characteristics. Thematically the record weaves simple tales of everyday life and love, that through rich use of metaphor and symbolic language become a sincere ode to the dark recesses of existential thought. Within this simplification of sound and theme, you can hear Longstreth and his cohorts relax, giving even the downbeat tracks on the LP a compelling effervescence.

Opener, ‘Offspring Are Blank,’ is perhaps the best exemplar of this new approach. The track opens in a cascade of humming which is so over the top that even the Muppets would think twice before putting it to record. Longstreth is plainly unfazed by this imperfection and quietly clears his throat before singing over the mesmerising vocal harmonies provided by Amber Coffman and Haley Dekle, “And in the marriage of eagle and snake / The parents are fertile / The offspring are blank.” The words are vivid and thought provoking, and you’ll find yourself grasping at several meanings before settling on one that satisfies. A stampede of drums and guitars follow bringing with them a chorus as catchy as any in Dirty Projectors catalogue to date.

The remainder of the album doesn’t disappoint. ‘About To Die’ is chipper as it delivers an uneasy tale of balancing the moral codes of religion against your own mortality “How could I hope to seize the tablet of values and redact it?” Lead single ‘The Gun Has No Trigger’ is no less emotive, it’s sparse production, pin point beat is accompanied by Longstretch’s sombre tones which be about anything from impotency to coping with a drug addled partner. On ‘See What She’s Seeing,’ Longstreth recounts the vagrancies of a hangover. Using jittering drums in place of pangs of headache pain whilst bending notes to ache of loneliness and the rejection of the night before, “Lonely and forgotten in the frozen world / Scorned in my desire / Ignored by all the girls / I need someone to comfort me.”

Unlike Dirty Projectors previous albums, which at times needed a decoding device to fully understand, Swing Lo Magellan is easy to relate to. Its songs allow mind space for a myriad of meanings to open themselves up and on repeated listens you find the album is littered with heartfelt humanity. It’s compositions are less jarring and simpler, but put together with no less skill and make the record admirably enjoyable from it’s first listen. In essence Longstreth is doing more with less. Daring to distill his approach to achieve a greater potency and make Dirty Projectors most enjoyable record to date. One which has left me sounding like another kiss ass sycophant, what a twat I’ve become.