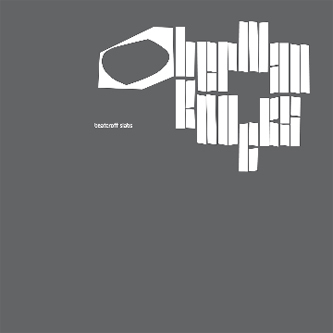 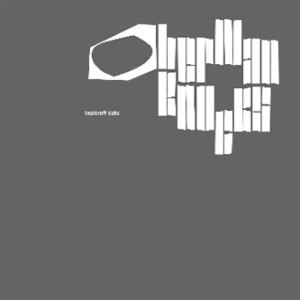 Hewed from granite, the London-based producer and concrete sound sculptor, Nigel Truswell, wields monolithic scrapes and dragged industrial-sized chains together, through palatial landscapes. Ominous and looming the Beatcroff Slabs shift around, what can only be described as, a haunting engineered world: a psychogeographic soundtrack to the chambers and depths of H R Giger’s renderings.

Even the cryptically misplaced and reticent track-titles allude to some esoteric or machine-coded form of communication: appellation’s such as Jamcole Partition and Gonn Blass Locker hardly give anything away. If there is any kind of theme than it’s an alien one; Truswell’s foreboding ambient contractions hinting at some unearthly presence.

Most of this 16-track oeuvre travails through organically sounding effects whilst distant colossus-heavy footsteps permeate across the minimalistic composed wastes. The first actual beats don’t enter the fray until the fourth track, Konshun Four, and when they do, those monotonous vistas are swept aside to make room for awkward tumbling breaks.

Another addition to the leaden ‘Science-Friction’ tone is Truswell’s mysterious voice which hangs suspended in the static fog like an apparition, or repeats obscured utterances like a broken-up signal from some distant dimension.

Often creepy and murky, the abstract horizons drift between exalted reverence (Jawbin Breaks) and lumbering dread (Lenkmyte). For those who enjoy their electronica darker and moodier, Oberman Knocks orbits the same space as the Warp and Ghostly International labels.