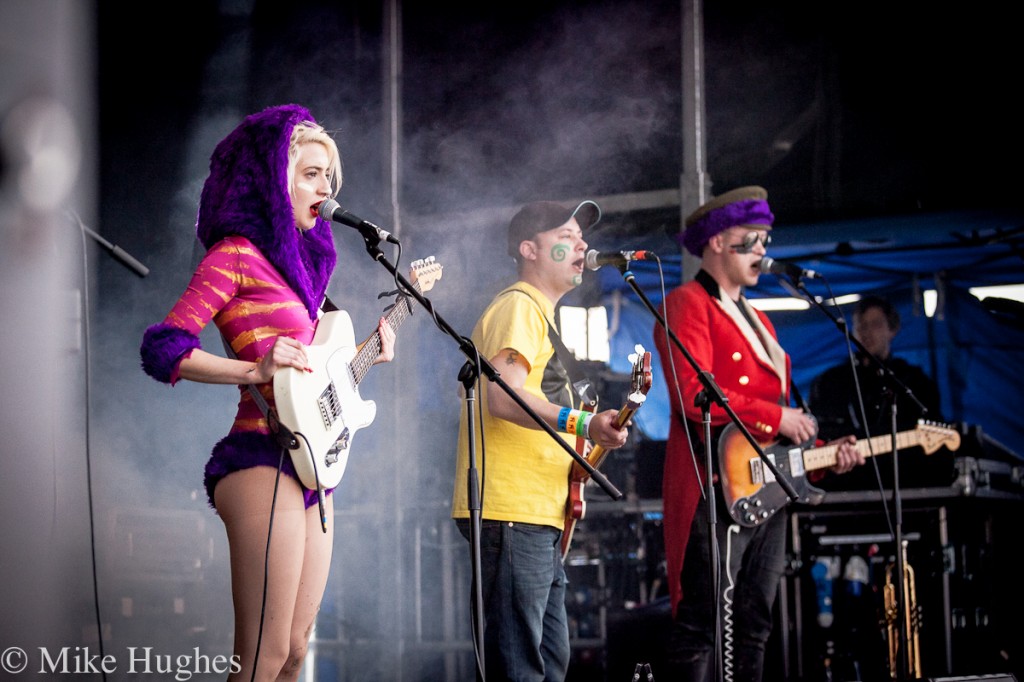 Saturday dawned and it was flag cracking weather, so much so that I later had to go and buy a hat from an amazing crazy dancing lady to protect my delicate skin. I have a slight confession. Much as I would truly have liked to camp on site, had a few jars and staggered back to my tent, the fact that I had cameras to re-charge, a laptop, photos to process and all that jazz, meant that I’d stayed the night in a great country pub a couple of miles away (they’re not sponsoring me, it was the King’s Arms in Sandhutton if you’re interested). All of which meant that I could have a leisurely breakfast, type up the previous day and get back on site (main car park now full) in time to catch Wooden Box. These are a Scottish six-piece, of the rambunctious roll-along folk rock variety. They were pleasant, if somewhat generic, so I headed over to the Treetop Flyers, over on the main stage. I thought these were very well put together indeed, Band-ish, and rather nicely built on duet vocals. It made sitting out in the hot sun with beer number one (and only) of the day a very pleasant experience.

I eventually managed to unglue myself from my deck chair though, back to the Dock Stage; nowhere near a dock but in a tent, a good move for atmosphere in the bright mid-afternoon. The band that were on didn’t need too much help with ambience, they brought their own in bucket loads. I’ve been a long-time admirer of Laki Mera but not seen them live before. After today, I will miss no future possibility. The sense of foreboding grew, having just the boys on stage for instrumental opener ‘Pollok Park’ before Laura Donnelly stepped up to join them, adding built-before-your-very-eyes layered vocals to trippy beats that could have as easily come from Bristol as Glasgow. They get described as folktronica, but are far too polished for that. I was going to say they reminded me a little of Cocteau Twins, but then Laura’s voice took off soaring high and blew my theory out of the water. They were a definite highlight, the sort of discovery that makes festivals so worth the effort.

I then made a quick nip over to the main stage to catch The Staves. These are a band I have seen before, at this year’s SXSW. They surely bring the nicest three part harmonies you’ll hear all weekend, and are a quiet and refined pleasure. Very capable of making time stand still for three minutes or so, they were at best effect today on the more upbeat ‘Motherlode’. They’re rather well spoken young ladies, with all the ease of sisters who have performed together since they were small, illustrated when one piped up to tell us that it was a “ruddy lovely” festival. “Ruddy…ruddy..what sort of sort of word is that?” “I know, I know…I saw a kid and I panicked”. Actually this was a touchstone for the weekend, bands coming on, seeing the very large proportion of pre-teen children in the crowd and making some comment or other about having to rein in the lyrics or banter.

It certainly applied to Beth Jeans Houghton, who wholesale replaced the brilliant shouty “fuck off” chorus in ‘Prick’ with “get lost”. It was a slightly vain gesture, as anyone who had ever heard the song before was yelling out the original version, and it’s not exactly hard for the rest of the crowd to pick that one up. She even tried to insist on getting Calum to introduce ‘Holes’ – there’s a time when drawing attention to dodgy lyrics only makes it worse, trust me. Calum was suffering today, with migraine, but getting no sympathy from Beth on the basis that he will never ever have to give birth. Beth and the Hooves Of Destiny are always great value, and in the three years since I first clapped eyes on the band, they are just as startling as ever, in attitude as well as attire. Beth today is wearing some sort of hooded fur trimmed leotard. The rest of the band are just as experimentally clad, enough to very occasionally compete for attention with the main attraction that Beth surely is. She was pointing to the mud spatter up her legs, telling us that was from Secret Garden Party yesterday, leading me to think that maybe someone could explain showers to them? ‘Dodecahedron’ gave the opportunity for an impromptu kids’ quiz, and there were more tee shirts given away for best dancing. They also played a couple of new tracks that they failed to tell us the names of, but one of them most definitely saw Beth producing something like a pro-Obama political rap. The days when there was the slightest danger of them turning into a sea-shanty folk band are a long way in the past

Another band I was keen to see was Field Music, who played democratically around a central empty square space on stage. As can sometimes be the case, they were a good band, excellent in many ways but somehow even their Sunderland charm failed to move me very far today. I think perhaps I need to listen to them more, or perhaps accept that they affect the listener in a more cognitive and less of an emotional way.

Back on the main stage, Los Campesinos were out in full seven-strong force and clearly had a goodly number of rabid supporters out front, the sort who good naturedly turn round and exhort those further back to clap their hands, or to dance more. With most crowds that would make me want to poke their eyes out, or more likely my own, but Los Camps and their people are so genuine that even old cynics like me are instantly drawn in. They opened with ‘Romance Is Boring’ and played a definite greatest hits set. Naturally they had to make reference to the kiddy laden crowd, and Gareth self-censored by leaving gaps – again to little avail as the crowd roared back the missing lines of ‘Straight In At 101’, and to be honest, I’m not that sure if  “…more post-coital and less post-rock…” was going to cause too many Mummy and Daddy questions over the gas stove later. Gareth pointed out one (very) young man on his dad’s shoulders, commenting on his being in a Man Utd strip in Yorkshire, a brave move in Gareth’s opinion. This resulted in a certain amount of crowd reaction, to Gareth’s absolute horror “you just boo-ed a kid, I can’t believe it!” All was good though and by the time we got to ‘You! Me! Dancing!’ – well, if you weren’t, you had no business in front of this stage. When they finished the set, four or five of the band came down into the pit to connect with their fans over the barrier. Genuinely nice people.

There were lots of great reasons to go to Deer Shed, but if there was one over-riding reason for me to be here rather than SGP (also running this weekend) it was School Of Seven Bells, headlining the Dock Stage tent, and from where I sit, a coup of major proportions to have them playing. A band I have in the past loved to distraction; I’ve had misgivings ever since Claudia Deheza moved on, leaving it essentially a two piece with her twin sister Ally and ex-Secret Machine Ben Curtis. Behind the scenes I’d heard that actually everyone was fine with it, Claudia had simply decided it was time, but still I hankered for the old twin sister line-up and harmonies. They came on and started up with ‘Joviann’. The immediate blasting sugar rush in the crowd was enough to make me realise straight away just how wrong I’d been and how natural it was, how much Ben and Alejandra are a hugely effective musical unit. Funnily enough, as a live set-up they were a four piece augmented by a drummer and a keyboard player, but seeing the two main characters trading guitar licks face to face, and the energy spiralling upwards as a result, was what it was all about. I was rapt.

The festival organisers had been really good at scheduling, meaning that you could see two thirds of the acts without any clashes. This meant that I was  still in time to catch Villagers headlining the main stage, so I did. I’m in a cleft stick here. They’re not a band that do it for me on any more than a superficial level. However, I was very clearly indeed in a minority. From my privileged position in the photo pit, I could see that there is a huge amount of love for the band, with heart-felt singing back of nearly every lyric. So to be fair and objective, I can report that the crowd loved Villagers and that they were worthy main stage headliners. I’ll give them another try and see if they ‘take’.

Waiting for the action to start