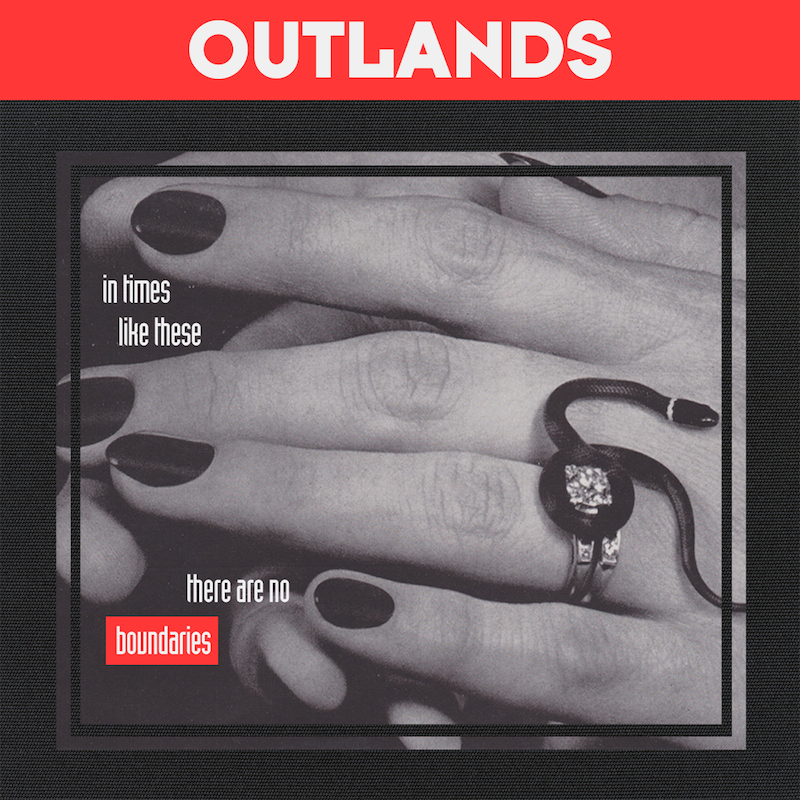 Infused with the polygenesis and omnivorous spirit of our times, the Outlands duo sail and drift through all the various “wave” affixed genres; from “chill” to “dark”. However, the main ebb and flow is of a woozy Gothic nature, Melissa’s voice permeating through the brooding ether like a dejected wraith surveying the aftermath of a lamentable battle scene. On this their self-produced and self-released debut EP, the plaintive protesting tones allude to war and its pain are embodied in the lyrics and song titles.

The manifestly monikered Black Ops poignantly crackles with a recording of the activist poet Denis Levertov‘s forlorn 70s poem, ‘Life At War’, before skulking off on a growling fuzzy trip into the miasma. A gut-churning bass pummels the nerves and tribal breaks ponderously roll over the top on this monotonous tome.

A cover of Marianne Faithfull‘s similar themed questioning and sighed indignation, Broken English, is handled with graceful respect by the pair. They ramp up the sophisticated “disco-noir” backing with a touch of Italo House and air-y ethereal swooning aloofness; turning this paean original into a pumping classy dance track.

The menace is lifted and replaced by a dreamy, languorous, veil of hypnotic R&B and early Madonna-esque vocal kinks on Com Ocean, whilst the lolling slinky Sisters/Lovers sounds like a lost pouting collaboration between Donna Summer and Nil Rodgers. But it’s the ominous opening, The Looming, that lingers and resonates the most, with its slow cyclonic synthesis and rhythmic jerks. Anticipation mounts as the Massive Attack (circa Blue Lines) imbued kinetic beats sync with Melissa’s echoing choral blues.

Those wooing esoteric-lit offerings from the Outlands, move like amorphous and placable transmissions from in-between the musical cracks of shoe-gaze and electro, yet sound mesmerisingly fresh and full of substance.