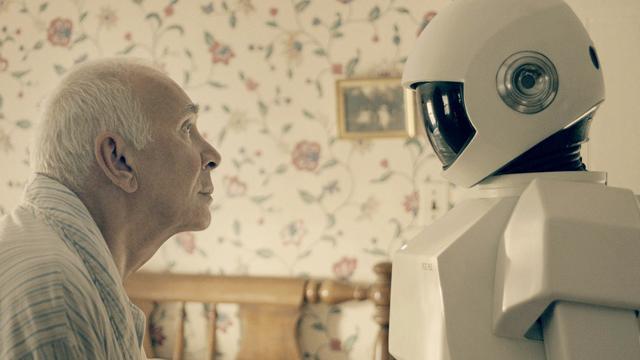 A small film with a big – although not overly saccharine – heart, Robot and Frank tells the story of Frank, a retired cat-burglar who spends his days reading books from the local (and soon to be closed) library, in a quiet town just outside of New York. He is near-estranged from his children and, from the outset is slowly succumbing to the perils of growing old; spending days forgetting days and keeping the memory of his past life alive by stealing bath bombs from the perfume store that has replaced his favourite diner.

When his son, played by the always excellent; always underrated, James Marsden arrives with a robot designed to help take care of him during his episodes of memory loss, we are slowly introduced to frank as the man he both is and was through Langella’s subtle and poignant performance.

It is a testament to first-time director, Jake Schreier that the film is so balanced. Shifting between Alzheimer’s drama to odd couple comedy, to love story and a sci-fi film set in the near-future, the film does at times loose its sense of pacing but is never anything less than charming.

The true essence of this lays with Langella. Whilst the cast of talented supporting actors shine in their roles (most notably Susan Sarandon’s withheld librarian), this is undoubtedly Langella’s film. It is a role in which he imbues such an essence of self that it seems more than a coincidence that his character shares his Christian name.

Kudos must also be extended to the excellent casting choice for the voice of Robot, Peter Sarsgard. Langella insists that the two men have never met in real life, but the believability of the relationship that Frank and Robot develop over this films 90minute runtime is as beautifully realised as any of the scenes with physical actors. This not only adds to the gravitas of Langella’s understated performance but also highlights how wonderfully written the screenplay by Christopher D. Ford truly is: you care about these two men, even if one of them was assembled in a factory.

In one early scene Robot says to Frank (who is somewhat technophobic) that if he sends him back to the factory, he will have his memory formatted and will seize to exist as he is now. It is for this scene – and the many scenes like it – that this film will stay with you long after the credits. We live in a world where our interactions with technology are beginning to dictate how we live our lives. The devices that we hold so dear are designed for ease of use and to help us achieve our daily goals, and how this will digital landscape will shape our future is unclear. Robot and Frank does not attempt to approach an answer to this great unknown, it simply considers the emotions of anything that exists, whether programmed or not, and explores, rather wonderfully, just how intrinsic to our livelihood our memory is.

With Robot, Frank is able to once again live as he did: with his memories and with friends that will remember him, even if he can’t.