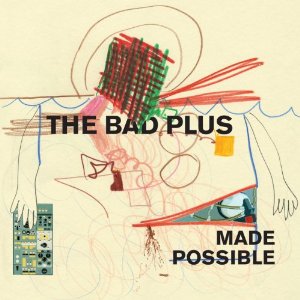 With their unique modernist take on jazz, the rambunctious and highly articulate The Bad Plus take the stoic “highbrow” aloofness of that chosen musical genre on an “avant-garde populist” trip.

The eighth studio album Made Possible marks another reinvention for the double bass, drums and piano trio from America’s Mid West – a location that continues to imbue and shape the combo’s music, even though this LP (as well as 2005’s Suspicious Activity?) was recorded outside their Minnesota homeland, in Upstate New York.

Continuing to convey progressive ideas with bounding energy, visceral verve and “Looney Tunes” clowning, The Bad Plus now add subtle hints of synth and occasional rapid bursts of electronic drums to their “signature acoustic palette”.  The instrumental moods on display shift from the delineated lush romantic yearnings of ‘Pound For Pound’, to the stochastic sounding experimentation of ‘Sing For A Silver Dollar’.

As you might expect from a group who’ve stuck together for the last twelve-years (though they originally started playing together back in the early 90s) the musicianship is attentive and tight, even when they cut loose on musical suites that allude to signs of extemporization.

‘Re-Elect That’ has the band shuffling between sophisticated vaudeville – David King’s drums sound like the cushion for various dropped cartoon weights and objects – and Coltrane; all the band members seamlessly approaching the song from different starting points yet finishing on a unified note. Frantic dance fans will find ‘I Want To Feel Good Part 2’ an up-tempo jive highlight; whilst those longing for poignant fragility will yearnfully enjoy the quivering ‘For My Eyes Only’.

Paying homage to the revered jazz drummer/composer Paul Motian – stalwart of such legendary labels as ECM and Blue Note who began plying his trade with Bill Evans’s piano-led combo in the 50s – the group cover his waltzing, meandrous ‘Victoria’.  Compared to their usual deconstructive and amusing appropriations – in the past they’ve covered an odd selection of tunes by such diverse acts as Abba, Blondie, Nirvana and Yes – this indolent number is given a fairly traditional overhaul; closing the album on a wandering tone of reflection.

Despite the complexity and mathematical timings, the style of delivery is both beguiling and exuberant, with the onus on discovery and enjoyment.