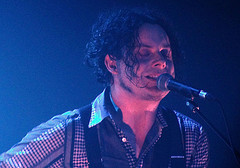 Jack White is no stranger to the seaside towns of northern England. He and his big sister Meg once shot Under Blackpool Lights on the Fylde coast and there is to be a return to the scene of that early White Stripes triumph at the Empress Ballroom further down the road on this short solo tour of the United Kingdom and Ireland. But tonight as this particular rock and roll circus hits town and more than three thousand people pour into Bridlington Spa’s recently renovated and refurbished Royal Hall, White is on the opposite coast in the East Riding of Yorkshire. And what is more he has brought Willy Moon with him. Moon may well be the sideshow to the main event but he sure ain’t no Aunt Sally.  A few days after Halloween and one before Bonfire Night he seizes his thirty minutes of fame with gusto and a blistering cocktail of spooky garage punk, 50’s rock n roll pyromania and the assured persona of an extra from Mulholland Drive. He works the stage and his audience like a charm offensive but just like the King before him he leaves the building way too soon, though respectfully leaving the door slightly ajar behind him for the entrance of his Third Man Record label boss.

Jack White’s backing band of choice tonight is the all-male Buzzards, the five of whom circle their leader as he comes on stage and then rip the dust sheets from their instruments before setting about Dylan’s Highway 61 Revisited as if they were embarking upon their very own highway to hell.  An equally tortured Dead Leaves and the Dirty Ground makes you wonder if there will be sufficient oxy-acetylene in Bridlington tonight to weld all of this splintered metal together for an entire show. Freedom at 21 from White’s recent debut solo album Blunderbuss and then The White Stripes’ Hello Operator continue in this relentless vein, the sheer hulk of the latter difficult to properly comprehend when measured against the skeletal frame of the original. But this hugely impressive sound is slowly consumed by overwhelming bombast as Raconteurs and Dead Weather tunes vie with Blunderbuss material in trying to see how far each one can travel up the backside of White’s self-indulgence. One more false ending and one more guitar solo makes you yearn for the stripped bare minimalism of the White Stripes of yore.  What had begun as big band artistic liberation had by now succumbed to the dawning realisation that maybe more actually is less.

But perhaps tiring of his own histrionics White then gets wise and unleashes a closing triple fusillade of Steady, As She Goes, Weep Themselves to Sleep and a truly incendiary Ball and Biscuit the like of which would have fittingly closed out any monster rock show of the modern age. He could, and probably should have left it there but White returned for a White Stripes strewn six song encore, the last of which, Seven Nation Army, was the only one to pass any real muster when lined up shoulder to shoulder against the original. Taking this show on the road, vacillating as he does between two gender-specific bands on any given night and projecting his back pages in brand new Technicolor widescreen glory is yet more proof of Jack White’s willingness to push the parameters of his art and vision. To see it properly realised though he may have to dilute his natural desire for occasional excess and return to the trusted maxim that less really is more.