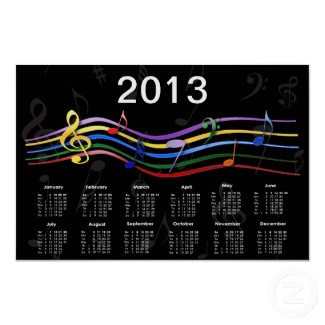 You worn out with lists yet? The subjective lists of what was the best and worst of 2012 are done and dusted, and right now, it’s the turn of all those lists of who is going to be big in 2013. Some will be right, some will be wrong –and some you’ll be still scratching your head about.

This list is more objective. The aim is that it will give you an idea of what is expected out in 2013, and if you have been saving record tokens, Amazon gift vouchers, iTunes cards –or even if you like spending cold hard cash in your local independent record store.

Please note: even in the digital age, release dates will vary from country to country. These ones apply solely to the UK.

January used to be seen as being a very dead month for new releases- but there’s lots of stuff on offer to tempt punters this January; beware of making any resolutions about buying less music, January may be enough to stop you very early on. January 7 sees the first releases of the year: Black Veil Brides Wretched and Divine: The Story of the Wild One, along with Dropkick Murphy’s Signed And Sealed In Blood and Pere Ubu’s Lady From Shanghai. The following week is pretty busy with the release of Everything Everything Arc, A$AP Rocky Longlivea$ap , New Order The Lost Sirens, Villagers Awayland and Yo La Tengo Fade (all January 14). January 21 sees comebacks from Adam Ant Adam Ant is The BlueBlack Hussar In Marrying The Gunners Daughter, Blackout Start The Party, Joy Formidable Wolf’s Law, Bad Religion True North and I Am Kloot Let It All In. Meanwhile Scotland brings forth Alasdair Roberts & Friends A Wonder Working Stone and Pictish Trail Secret Soundz Vol. 2 (both January 21), while January 28 sees Biffy Clyro release Opposites, their sixth studio album.

February 4 sees Frightened Rabbit release Pedestrian Verse , their fourth album. It hits the shops and download stores on the same day as Eels Wonderful, Glorious, Coheed and Cambria The Afterman: Descension, Will.I.Am #willpower, Kimberley Walsh Centre Stage, Ron Sexsmith Forever Endeavour and Courteeners Anna. The next week sees Foals with Holy Fire, Ocean Colour Scene with Painting and Richard Thompson Electric and the long-awaited debut from Azealia Banks Broke With Expensive Taste (all February 11). Meanwhile, just after Valentine’s day Nick Cave and the Bad Seeds release Push the Sky Away, their fifteenth studio album since 1984. That comes out the same day(February 18) as the presumably rather different Major Lazer Free The Universe (February 18, 2013). This is Diplo’s dancehall project’s second album, with a start-studded star-studded guest list includes Shaggy, Santigold and Haim. The final week of the month –February 25- sees Atoms For Peace release Amok. The supergroup involving members of Radiohead’s Thom Yorke, Red Hot Chili Peppers’ Flea and producer Nigel Godrich. Thirty years after The Smiths made their debut, guitarist Johnny Marr will release The Messenger, while the hotly tipped Palma Violets drop 180. Meanwhile, though no dates are confirmed as yet, February is due to see The Cribs’ Payola, a best-of album, and also Snoop Lion Reincarnated. This is the new reggae direction from Snoop Dogg.

God Is In The TV can offer no guarantee that the weather will have got better by March, but March 4 is a busy and varied – day for new releases. Kid Canaveral Now That You Are A Dancer, Stooshe Stooshe, Stereophonics Graffiti On A Train, Dido The Girl Who Got Away, Laura Mvula Sing to the Moon (who was shortlisted for the BRITS Critics choice award) and a lost album from Jimi Hendrix People, Hell And Angels. The next week will again see variety on March 11, with Steve Mason dropping Monkey Minds In The Devil’s Time, while Hurts release their sophomore album Exile. Low release The Invisible Way on March 18, and Depeche Mode’s new album due in March 2013, as yet untitled.

After March, the release schedules are quieter-for now- but amongst those expected are the debut from AlunaGeorge in June. They were shortlisted for the BBC Sound of 2013 and BRIT Award Critics choice, and were apparently the most blogged about band in 2012.

It has been announced this very day that The Pastels will release their new album Slow Summits in 2013, and My Bloody Valentine have reportedly mastered their long-awaited new album.

What releases are you looking forward to in 2013?