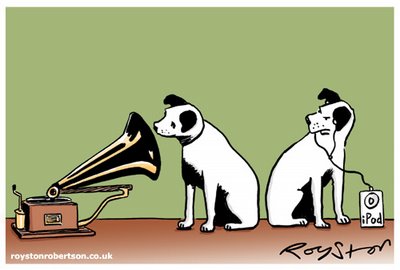 HMV (His Masters Voice) was the original intestine of EMI recordings, an organ to deliver whatever that record company had decided would be felched into the mouths of the public of the time. The news this week that it was to be sent to debtors’ prison was met with some degree of nostalgia, but a more prevalent feeling of ‘well, they deserved it’. HMV had been behaving like any other massive high street corporation for too long, sucking off and getting fat on the British public’s affection for Barry Manilow and Rihanna.

My generation, or let’s say cluster of generations, have seen alot of entertainment go down the tubes after Tommy Cooper, with Top of the Pops, the one reason to still watch television, going off air in the late 2000s, the original Rough Trade records (home of The Smiths and The Strokes) later, and now this bittersweet news about HMV. The main problem is, it’s like watching your least favourite aunt drown while your idiot cousins keep having dozens of children. There’s too much fucking information and ‘creativity’ out there, and no-one has time to absorb it all, unless they are an obsessively self-interested journalist ar a complete nutbag.

Musicians, or whatever people call themselves who think ‘they have something to say’, should stop making music. No one gives a shit anymore, because no one has time to hear it, or listen to the 49 other ‘recommendations (by the musician is question’s mates) they have to endure before they find your work of genius. You know what I’m talking about: if you don’t give a shit about whatever random act your friend is liking for reasons unbeknownst to you, why should anyone else?

The reason is, the ‘Gatekeepers’. These may be paid public relations companies, DJs, radio or tv producers, print journalists, the better websites, HMV or TOTP. Money-grubbing, self-interested, scuzzy, attention-seeking, capitalistic, greedy, pathetic oppurtunists they may be, but they know their shit, they (think they) know you, and someone is paying them to make sure that the good stuff gets through, or at least gets sufficiently hyped up to make it work, or at least create some fizz. The problem is we are missing this nonsense, and we don’t really realise it, because we are surrounded by a sea of ‘good music’, as opposed to things to get really irritated about or really excited about.

You are bombarded with invitations for every fucking thing every fucking day, even if it’s on another continent; your friend expects to ‘like’ his friends experimental drum workshop so you dutifully do so, every musician thinks that because their latest tedious Pearl Jam/Foals parody is online it will catapult them into the Brixton Academy – well it will, IF YOU PAY A PR COMPANY A LOT OF MONEY TO MAKE IT HAPPEN (Vaccines, Mumford, ever wondered why all your new music ‘stars’ are already pig-rich?). There is no more money left in the independent music industry, what do you think the PR companies live on, air? I envision a terrible Hardy-esque scene of a thousand Robert Plants hanging from branches of trees across the land, with a post-it stuck to the corduroy suit lapel: ‘Dun because we are too menny’.