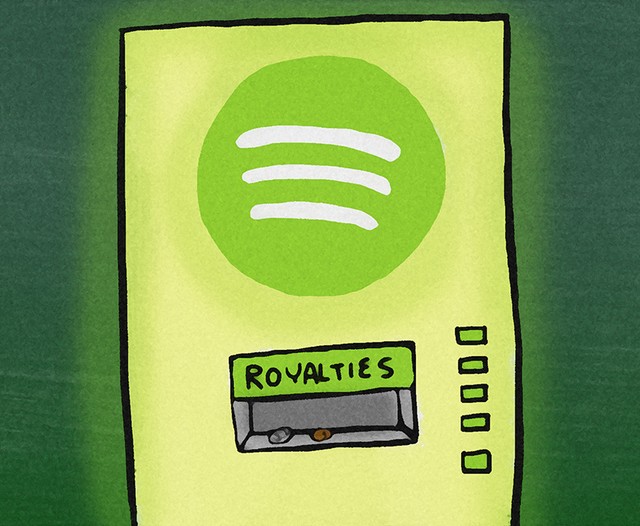 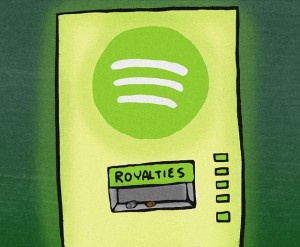 You know it’s true, no amount of artist-run, user-friendly services or attention-grabbing headlines are going to help the vacuum that has reached the music industry in a completely legal way.

The band I work with put up their latest EP on Spotify. The listening response we got for it is awesome. We had just over 600 plays of our five-track EP in just under five months. We earned $0.83 from it – £0.53. That equates to 0.008p per EP (six tracks) compared to the £5 we sell it for at gigs.

In the same amount of time, we had around 1700 plays on Soundcloud and around 450 on Bandcamp – both without royalties and no sales via Bandcamp. This also doesn’t include the stats from the other services we have streaming the EP. We won’t pull the songs off these sites and services because sharing music (for promotion) is better than not. It’s frustrating to hit a brick wall with music you love because the artist can’t afford/is unwilling to share it in this way.

Napster struck fear into the hearts of the music industry, and the internet revolution devastated it. However, everyone who pirated music knew in the back of their minds that what they were doing was wrong and they knew it was illegal. They knew if that they really loved the artist they were listening to, and wanted to support them, they would buy their music, go to their concerts, and buy their overpriced merchandise. This gave artists hope, that despite waning multi-million record sales from the mass market, they still had dedicated fans who would keep them afloat.

Then dedicated streaming platforms emerged. First in the form of early low-res players such as Winamp’s pirate radio equivalent “SHOUTcast” and the legal follow-up “LAUNCHcast” (bought by Yahoo! in 2001) which, although popular on the internet, never crossed over to mainstream usage. YouTube followed with slightly better quality, but still with an undercurrent of illegality (unless they were ad-funded official videos).

Why streaming is hurting the industry more than pirating, and why mainstream record labels are still as horrible as ever.

Then came Spotify, the client based, legitimate tool. It paid royalties to the artists, so it was the first viable, high-res system that was either ad or subscriber supported. This took away the guilt that came with pirating, and so allowed not only the “everything for free” culture to seem acceptable, but also brought it crashing into the mainstream.

As for record companies, their tactic around this new era was to take advantage of what was still making money. Whilst the recession took hold in the mid-2000s, the concert industry boomed. More music that was easily accessible via the internet meant more people wanted to go to the concerts of the artists they could listen to. This meant more money was going to the artists via their live appearances than it would from their releases.

The surprisingly insightful documentary “Artifact” (on 30 Seconds To Mars no less) highlights the industry’s new way of making money from this: the “360 contract.” No longer seeing the profit they acquired by record sales alone, all new contracts made with artists now encompassed their merchandise sales and touring profit, weakening the creative control and ownership artists have over their music.

So what is there to do?

Stay independent.  The next step for artists looking to turn their passion into a job was to get signed. It used to mean allowing record labels to control your image a little, send you out on press tours relentlessly to promote an album, and maybe feeling a little pinched in your creative control and recording budget.

Now it means the following: almost no money from your record sales, touring and merchandise; no real creative control over your record, your tour and your merchandise, and the ability for a record label to sell the music you put so much work into to corporations and advertisers to use in whatever capacity they want to, without you seeing much of the profit from it.

The thing that broke the record industry will ultimately be the thing that saves it. The internet is a tool, if used correctly, will bring what you recorded in your room, your community centre or your local shabby recording studio to the world, without the shipping cost. There’s no way you would’ve heard about your favourite tiny overseas band or artist without it. Before the internet really helped make indie music mainstream, we had TV shows like “The O.C.” to thank. 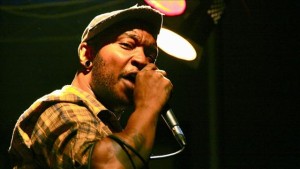 Sell out.  You’re never going to pay your rent as an indie artist. There’s no way. You have to work a job that’s going to be your off-peak fallback. There’s no deal in the world now that’s going to help your one-hit wonder support you for the rest of your life.  You’ll tour into the ground and you’ll just earn enough to make it worth it, and then that’s only if you’re big enough to sell out all your shows.

P.O.S., a Minneapolis-based rapper, part of the Doomtree collective, and signed to independent label Rhymesayers Entertainment has recently had one of his songs featured in an Adidas advert. There were rumblings of dissatisfaction amongst his fans due to his anarchist politics in his life and his music. He posted to reddit a response as to why he (and producer Lazerbeak) felt that they could – and should – allow their song to be used.

Here’s some of what he said:

“Licensing songs for advertisements in the world of Spotify/Apple Music/Tidal and the like, is kind of key. Simply put, it’s hard to sell enough music to be an underground adult musician.

For every die-hard Doomtree/Rhymesayers fan that will spend money on a record, there are 50 more casual fans that will stream it for free. The easier music is to acquire for free, the harder it is to make a living on selling your songs…

…I think it’s a cool add [sic] as far as adds [sic] go, and here I am explaining myself, so that’s a good sign for me and my two kids, Lazerbeak and his three kids and the potential for another few months of rent worry free…

… Anarchist values taken in full consideration we live in money world and eating is needed almost every day.”

What can I do?

Buy music. Go to shows. Buy merch. Support your local scene. Support your local record stores. Stop streaming because it’s convenient; own something physical. Have passion in music because as much as you might hate the mainstream music you hear on the radio, that’s where the money is. Put your negative energy aside and use some of your hard earned cash to fund the music you do like. Be a part of what you love by committing to it, not by making it part of the background.

Hitting shuffle on Spotify is less than 1% of the feeling you get when you sit down and listen to an album in full, on CD or vinyl, bought from your local independent store or out of the hands of the artist at a show.  Care more, because when the music you love stops being made, it’ll be your fault.