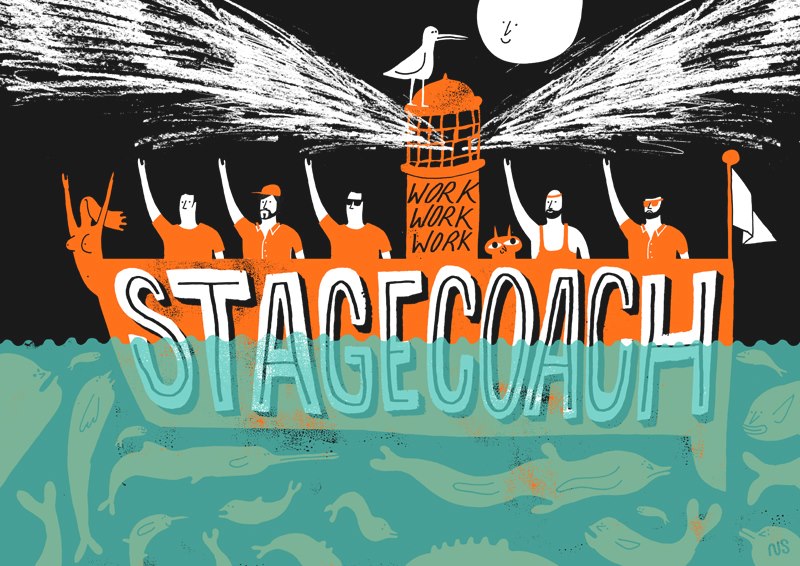 Stagecoach release their long-awaited debut album ‘Say Hi To The Band’ on the 13th of May through Alcopop! Records. Known as one of the UK’s hardest working bands this determination is mirrored in the title of the album’s energetic hookladen lead single ‘Work! Work! Work!’, the video for which you can watch below now! The video captures Stagecoach’s infectious energy, as the band and 50 fans cram into a tiny room for a performance of the albums opening track.

Produced by Rory Atwell (Palma Violets, The Vaccines, Yuck), the album will be released digitally as well on CD and vinyl. In keeping with the Stagecoach tradition of embracing unusual formats, a limited edition MiniDisc will also be available. Despite forming a decade ago, this will be their first full-length. This is referenced in the albums’ title, as singer/guitarist Luke Barham says: “We decided to name our album Say Hi To The Band as after 10 years of writing together we finally have a full length record to present to the world. We wanted to introduce the band to new fans but also reacquaint with older friends. The title also reminds us of the warm friendly welcome of classic albums like Meet The Beatles and The Beach Boys Love You.”

Stagecoach will be performing tracks from their debut album in live shows throughout the year. Their next UK tour begins May 11th and the band will be visiting festivals across the country this summer.