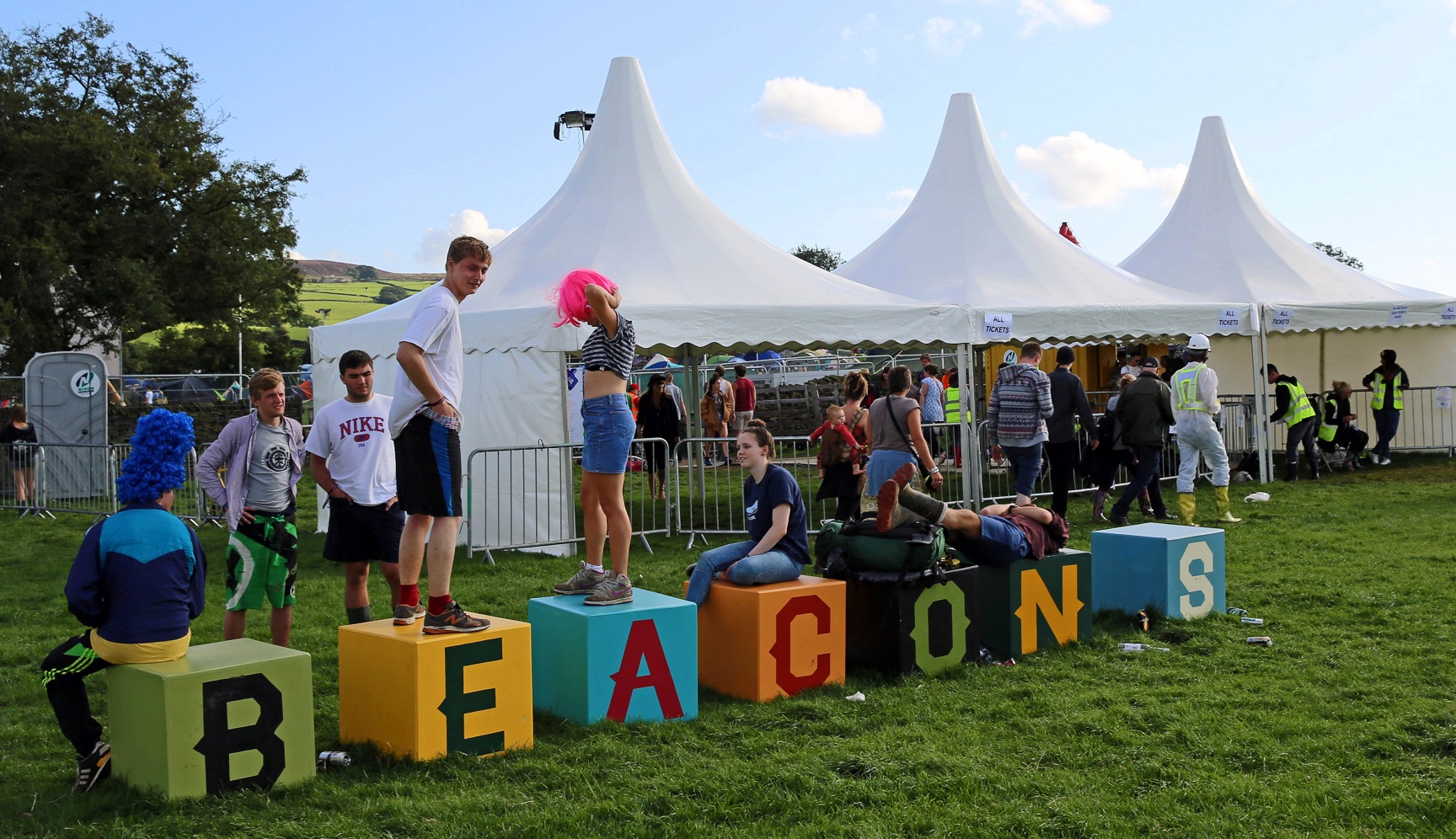 True to its name, Beacons has very quickly emerged as a real shining light amongst British summer festivals. It has achieved this position by making music its bedrock, drawing an often quite remarkable roster of national and local talent from the outer limits of indiedom, dance and the leftfields of what is our recent past, present and most probably the future. Upon this solid foundation, Beacons has begun to develop an imaginative programme of arts and cultural performances and fully embraced the concept that 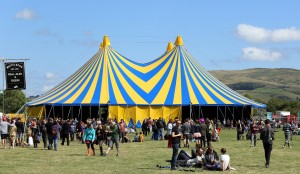 entertainment is most surely for the whole family. When this is then located just outside the market town of Skipton in the beautiful rolling countryside that is the Yorkshire Dales it is easy to see why in only its second year Beacons is already established as one of the North of England’s major festival attractions.

Arriving in bright sunshine to the soulful sound of Leeds’ singer-songwriter Hayley Gaftarnick drifting out from the ELFM tent is the most perfect of starts to the weekend. Though cut from a darker cloth and a deeper sense of foreboding, Brighton trio Esben & the Witch also believe in melody and their early evening appearance on the You Need To Hear This stage ignites the 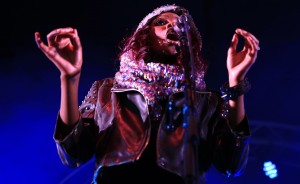 musical touch paper of the festival proper. It is a flame then carried aloft by Lulu James (pictured left) onto the festival’s main stage. Despite being bedevilled by early sound problems and the relative incapacity caused by having stood on broken glass the previous night, she rises high above these difficulties with her glorious take on a new soul for the now generation. Drawing her vocal style and stage appearance from a hybrid of Chaka Khan and Grace Jones, this 21 year old Geordie is most surely knocking very loudly on the front door of stardom.

Back in the ELFM tent Leeds’ three-piece CryBabyCry kick out some real low down and dirty grooves with attitude in abundance and no little panache, characteristics which are sadly lacking later in the evening in another West Yorkshire alumnus Simon Green’s headlining set as Bonobo. Pretty much all of the packed main marquee would heartily disagree with this view, but he just drifts rather aimlessly from 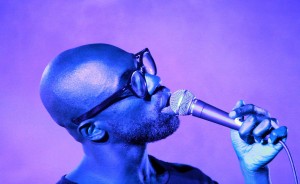 one shapeless, listless swathe of electronic ambience to another before it all fizzles out due to a lack of interest and energy. These are not accusations to be levelled at the preceding Ghostpoet (pictured right), mind, whose set crackles with menace and intent. With a vocal delivery pitched somewhere between Roots Manuva and Tricky, the charismatic London MC’s message is invariably bleak but never bereft of humanity.  All that remains of this particular Friday night is for Mr Pink Eyes and Fucked Up’s unrelenting interpretation of what constitutes noise nihilism. The rest is then left to the midnight masses and Spanish DJ John Talabot and his far more serene slice of house music.

Come Saturday and come the rains. The heavens open wide over Heslaker Farm but the musical mood does not suffer at the hands of the elements and as it was to be over the entire weekend the festival site is still peppered with a sea of shiny, happy faces. Findlay embrace this early afternoon inner glow, easily managing the indie world’s growing expectations of them with what is a no-nonsense, 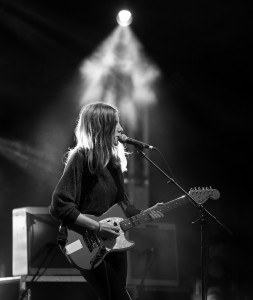 no-frills blast of good honest garage rock. Not for the first nor would it be the last time over the weekend, Royal Blood assumed that trusty White Stripes guitar and drums ground and powered their way through a blistering barrage of blood, guts and Zeppelin inspired riffs, to which the ensuing Wolf Alice’s (whose lead singer Ellie Rowsell is pictured left) gentler take on the meaning of indie, dance and rock n roll was an ideal counterpoint.

Another product of Yorkshire, Spectrals, punch a hole in the middle of any potential mid-afternoon torpor, sprinkling their set liberally with some spikey indie-pop. Also flying a local flag, though at a different end of that particular musical spectrum, The Horn The Hunt overcome the weather and intermittent technical problems with a beautiful swell of ethereal atmospherics. Later in the evening in that same ELFM space, Malcolm Middleton extends the meaning of the terms self-doubt and self-deprecation to hitherto unseen heights. His archetypal image of the dour Scots singer-songwriter almost conceals the hidden warmth, beauty and honesty of his material; the concluding ‘Devil and the Angel’ is a deeply moving account of tentative personal triumph over crippling uncertainty.

Whereas at the recent Stockton Weekender Dutch Uncles had appeared awkward and strangely out of place, here their esoteric musical leanings felt more comfortably at home as they strode confidently across the time signatures of an early Saturday evening. 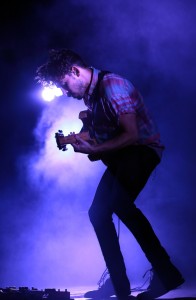 Local Natives (pictured right) brought with them some Californian sunshine, closing out the night on the main stage with one of the most rousing, euphoric performances of the entire weekend one in which their cover of Talking Heads’ ‘Warning Sign’ was a glittering highlight. For those of us largely ricocheting between the two main stages, it was though sadly truncated by the desire to catch those true pioneers of noise, pop and relentless rhythm, Wire who go on to demonstrate that there is never really any compensation for age, experience and inherent post-apocalyptic brilliance.

Sunday morning sunshine affords an opportunity to step outside of the central music zone and take a leisurely, reflective stroll into the quieter ambience of The Space Between. For three whole days this oasis of calm hosted any number of imaginative innovations from art installations to creative workshops; the Beacons Boutique to the Marvellous Tea Dance Company; and from art house films to specialist talks, including the undoubted coup of having a Saturday night Q&A with acclaimed film director Shane Meadows. 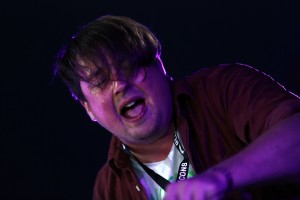 emphasis upon the word loud. The mighty Hookworms just get stronger and stronger, louder and louder, and in lead singer Matt Johnson (pictured left) they possess a man whose screaming inner turmoil is acted out over one of the most incessant, hypnotic maelstrom of sounds that has been created this side of Hades.  Their assault on the senses is exquisitely sandwiched between Wolf People, who in producing one of the best performances of this festival weekend confirm that there really is a point on the musical compass where Peter Green’s Fleetwood Mac meets the Alabama Shakes, and the more transcendental fluidity of Moon Duo’s spectral psychedelic road trip.

In what seems to be a very short space of time Django Django have evolved from early afternoon festival makeweights and would-be pop pretenders to become fully fledged bill toppers and accomplished party tune princes. But it is Savages in a heaving, 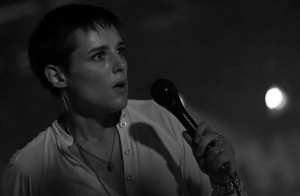 claustrophobic You Need To Hear This tent who steal the Sunday night best in show. They have in Jehnny Beth the thin white duchess of post-modern punk, a constant prowling malevolent presence spitting out words like tacks across a remorseless clattering discharge of guitars and drums. Magnificent as it is, it still comes as something of a blessed relief when this intense battery of fire finally subsides.

The combination of inspired scheduling, a gorgeous setting and an innate ability 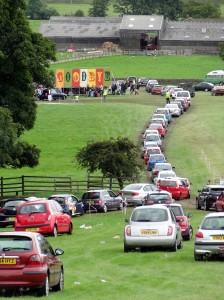 to capture and distil a relaxed friendly atmosphere right across the weekend makes for a winning formula. The proliferation of Glastonbury public parking stickers in car windscreens in the adjoining fields strongly indicate that Beacons Festival is fishing in the same pool of punters as the world’s greatest music and arts festival. But even allowing for economies of scale (at 7,500 Beacons is approximately only one tenth of that festival’s capacity), in two short years Beacons Festival has developed and matured to a point whereby comparisons with Glastonbury are not so entirely wide of the mark as they may have at first seemed.