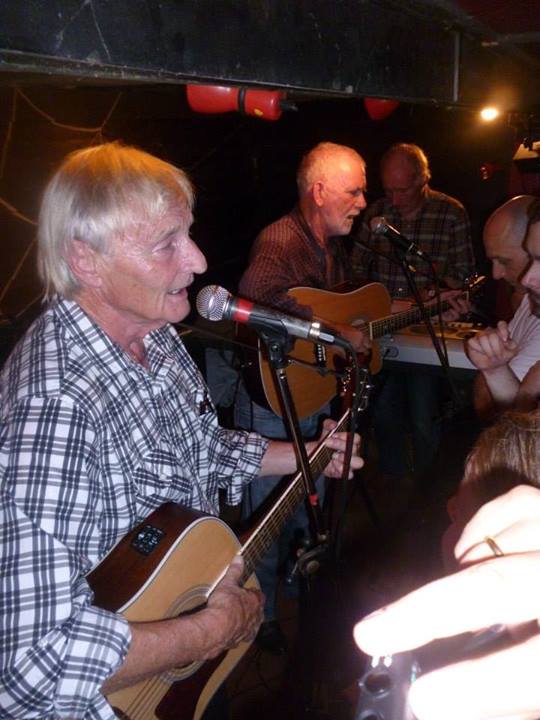 The Pete Best Band, The Quarrymen, The Blackjacks and Lee Curtis, The Casbah, Liverpool August 2013

The Quarrymen
57 years ago, a teenager named John Lennon and a handful of his schoolmates formed a skiffle group. The key members over its first few months were Lennon himself, Eric Griffiths on guitar, Colin Hanton on drums and, to emphasise both the group’s skiffle-element and amateurishness, Rod Davis on banjo, Pete Shotton on washboard and Len Garry on a one-stringed double bass made out of a tea-chest.
These lads played together as the Quarrymen throughout 1956 and 1957 until an impressed school boy of even younger years named Paul McCartney saw them in the July of that latter year and was taken into their ranks later that month. As the group shifted from skiffle to rock, both Rod Davis and Pete Shotton bailed out at the end of the Summer. Early 1958 saw the recruitment of another even younger guitarist in the shape of George Harrison (and subsequent farewell to Eric Griffiths and Len Garry) and a pianist named John “Duff” Lowe. The five piece of Lennon, McCartney, Harrison, Lowe and drummer Hanton cut a shellac demo that year before Lowe departed, with Hanton following in early 1959 following a drunken bust-up with John and Paul. It would be months before the trio who would become the Beatles would play again, and almost 50 years before the other ex-members could be convinced to play before audiences again, but in 2013 they’re still going strong, and tonight they played at the Casbah – the club opened by Mona Best in August 1959 and played at, on that opening night, by the reformed Quarrymen trio, with a fourth guitarist, Ken Brown in tow.

As an experience, it’s gobsmacking to even be in the same room as these men. Three of them were in the band that day in 1957 when John first met Paul (and also appear on a tape recording of that gig which, impossibly, still survives), and two of them were on that first ‘professional’ 1958 recording made by the group who would become the Beatles. This is living history.

And a history lesson, it’s also damned entertaining. Rod Davis, taking the role of both the scholar and key organiser in the band, has read the Beatle books and knows what the audience want to hear. Thus provide versions of both tracks recorded by the band in 1958, the two songs that were taped at the 1957 gig, the song that Paul first played to John (thus ‘passing the audition’ and getting him into the band), the song that Paul chiefly remembered from that first gig, etc. etc. It captures the late 50s music scene at a confusing and hectic time as skiffle morphed into rock with the arrival of early Elvis and Buddy Holly 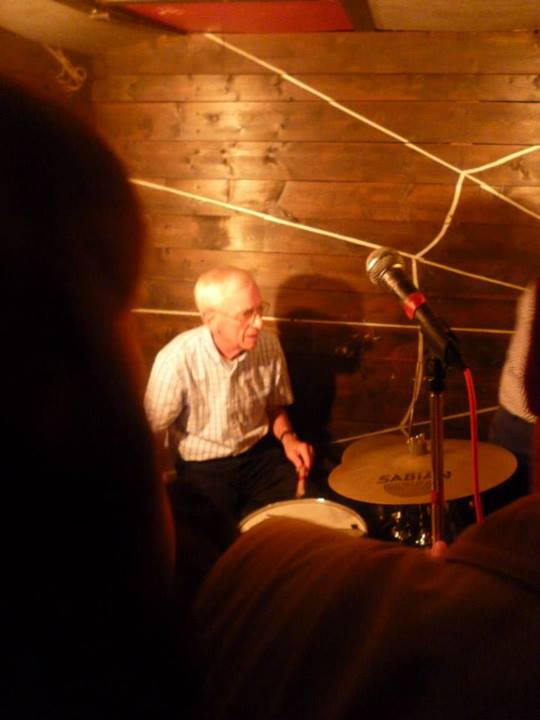 And as entertainment? It’s good. Very good. I suppose it would help if you have some interest in skiffle and early rock ‘n’ roll, but all the same, the band give a very entertaining performance. Rod, as stated, is the leader of the group. He provides the introductions to the song and sets them in context with well worn, and often amusing stories. For example “We were playing the next song the day that Paul came to see us for the first time. The concert was recorded by our friend Bob Molyneux onto an old reel-to-reel tape. Over the years he recorded over most of the songs, but two survived and were sold at auction about ten years ago for £78,500. But he did buy us a beer”. In contrast, Len is ‘the cheeky one’. He talks over Rod’s introductions, mocks him mildly and affects an air of studied insouciance throughout. Essentially, he’s John to Rod’s Paul. Vocally, Len is also a joy to listen to. The band tend to split the vocals between Len getting the early rock ‘n’ roll songs, and Rod getting the skiffle songs. Again, this mix works well as the music can sometimes be a little samey and hearing the contrast between Len’s full blooded – and occasionally (unintentionally?) filthy (“Well you can knock me down / sit on my face” indeed!) Elvis workouts and Rod’s authentic Lonnie Donnegan/Chas McDevitt gritted teeth stylings is very pleasing.

The band contain some great musicians. “Duff” Lowe is a great keyboard player, and his recreation of his parts on the ’58 recording of “In Spite of all the Danger” (with audience singalong) raises the hairs on the back of one’s neck. Rod Davis is a good guitar player, and double-bassist Owen Clayton is simply magnificent. Colin and Len’s instrumentary skills haven’t progressed much in the last fifty years, but in that amateurishness they help to remind the audience of what the band were actually like all those years ago, so it actually works in their favour. Also, in fairness to Colin, he has apparently just undergone a shoulder operation and has been told to “take it easy”!

Lee Curtis
The headliners for the night are the Pete Best Band – we are, after all, ‘round his gaff – but their first two numbers are with Lee Curtis, another Merseybeat legend. It was Curtis’ “All Stars” band that Best joined in late ’62 having been sacked from the Beatles, and it was Curtis’ band that was voted the second best band in Merseyside at the end of that year (behind you-know-who!) 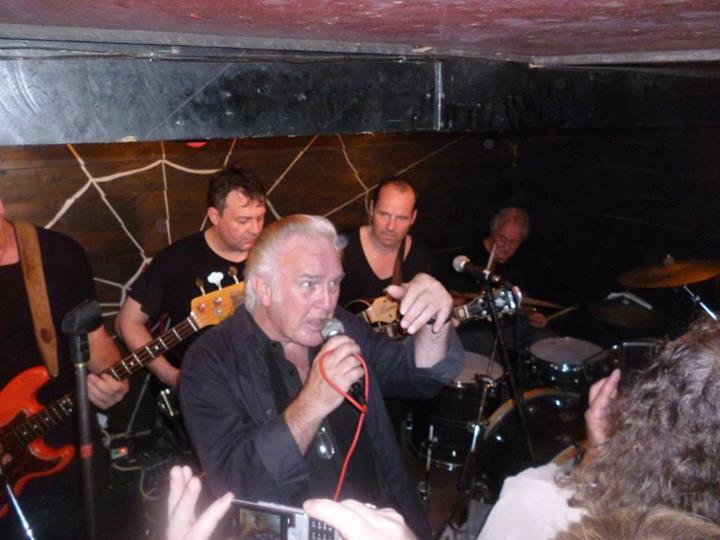 In those days Curtis was one hell of a looker – he could have played the lead in any 60s American teen movie. Nowadays he’s a very imposing figure of a man even whilst bent over two crutches. At first he seems nervous of the audience, keeping his head down underneath his thick mane of white hair gelled back in a 50s style, but still delivers a thrilling, spine-tinging rendition of “That’s Alright Mama”. By his second number, “Johnny B. Goode”, Curtis has clambered to his feet and surveys his audience. Again, the voice is electric, extremely powerful and utterly undimmed by age. A stupendous performance by a truly great frontman.

The Blackjacks
Following Curtis’ turn are another two special guests – two of the Blackjacks. Now, this is where we get *really* obscure. Remember the Ken Brown we mentioned earlier? Played guitar for the Quarrymen in late 1959? Well, after he was sacked, he formed the Blackjacks with his friend Pete Best on drums, Chas Newby on bass and Bill Barlow on guitar. The band stuck together for a year until Pete Best was pinched in August 1960 to go to Hamburg with the Beatles. The Blackjacks disbanded as Chas Newby headed off to Uni, but on the Beatles’ return to Liverpool that December – sans bassist – Chas stepped in for a few gigs. Those gigs were seen as ‘The Birth of Beatlemania’ as the band had become much tighter and exciting since journeying to Hamburg. Offered the chance to return to Germany with them in Spring 1961, Newby refused and returned to University.
Ken Brown played the inaugural Best Fest back in 2009 with Pete on drums, but following his death the following year, both Chas and Bill came to play tribute and have been regular visitors since. Thus it is that we get three of the four Blackjacks performing tonight. 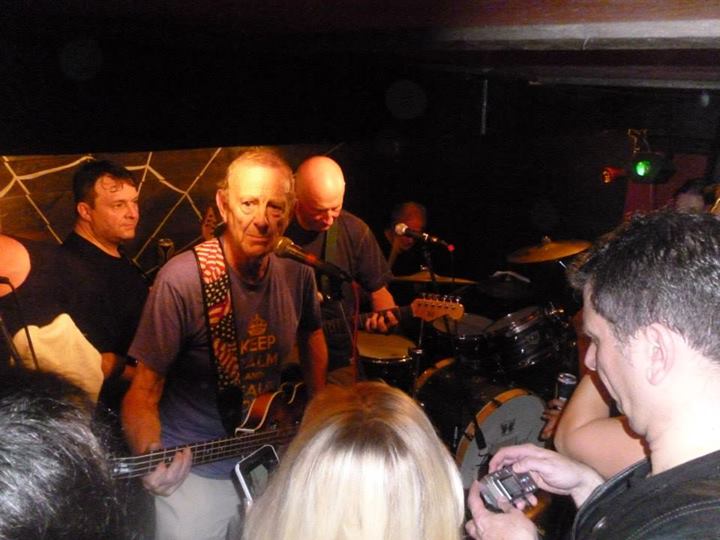 Bill Barlow had earlier explained that “we do the same songs now that we did then – we’ve never learnt any new ones”. Those songs consisted largely of a handful Carl Perkins covers, alongside the gorgeous “It’s So Easy” by Bubby Holly. Now, I’m not sure who the original lead vocalist was in the Blackjacks, but it’s Chas Newby tonight. He has quite a unique singing voice, very plaintive and emotional and deeply tinged with – but enhanced by – his Liverpool accent, but perhaps left a little reedy from the roll-ups that he was smoking before he took to the stage. He particularly shines, however, on both Perkins’ “Your True Love” and the Holly number which both strain his voice to its limits, but also strain the emotional effect therein. A charming, moving performance.

Of further interest is the fact that there were no recordings made of Chas Newby with the Beatles so seeing him live (or checking out the last few years’ gigs on youtube) is the only way to see the penultimate pre-fame Beatle member in action. And he’s a pretty mean bassist, it must be said!
It’s hard to tell the part that Bill Barlow plays in this performance as the Pete Best Band guitarist, Tony Flynn (I think), steps in to play second guitar alongside him, but the wall of sound is pretty convincing all the same and one easily forgets that that time has passed and we could well be listening to excitable teenagers with their whole lives ahead of them singing the current pop songs of the day.
Best himself is most surprising. By all accounts (and recordings) he was a pretty poor drummer (at least on record) in the early 60s and when I saw the Pete Best Band around ten years ago, he still had an extremely simple style, and even then was buoyed by his brother, Roag Best, on another drum kit. Tonight, during the Blackjacks set, he plays solo – and very competently, incorporating fills whilst still holding the beat steady – not something he was seemingly capable of in his Beatle days. A very pleasant surprise.
Following the vintage turns, the Pete Best Band carry on with their usual set of early 60s covers, at one stage getting Gizz Butt from the Prodigy up on guitar! The band are certainly competent and entertaining enough, but it was the history that I came for tonight rather than tribute acts, and I much preferred Best when he was playing with his 1950s band-mates than his current ones.

Overall, a fascinating look into Merseybeat (and pre-Merseybeat) c.1956-1962. And a great night of music!

2 thoughts on “Six Beatles in One Venue – Bestfest 5 (The Pete Best Band, The Quarrymen, The Blackjacks and Lee Curtis), The Casbah, Liverpool, August 2013)”