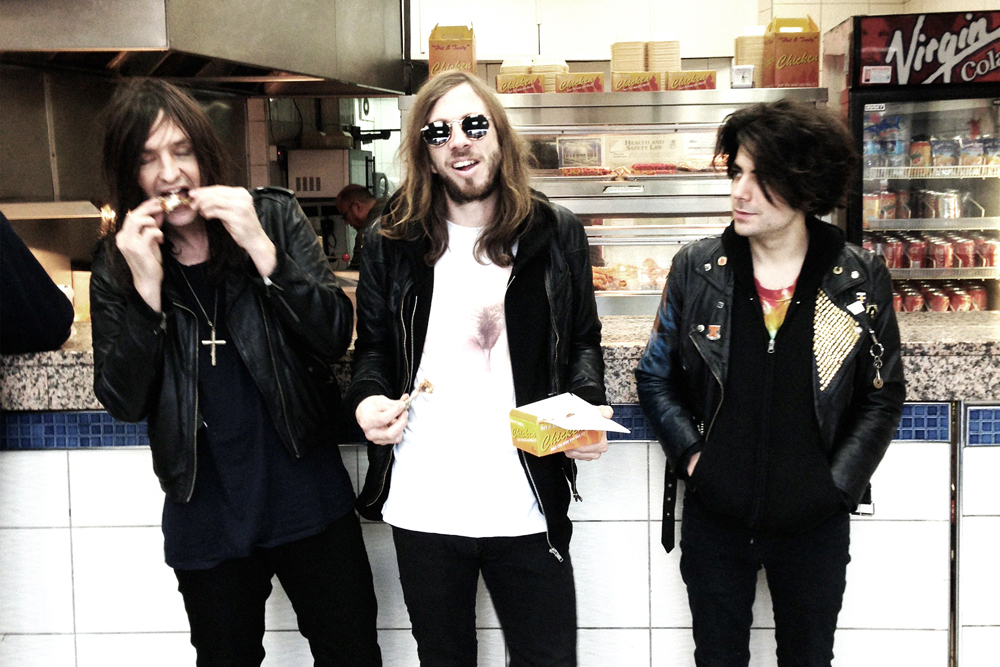 I spoke to Gary and Dominic from IS TROPICAL at Reading the weekend before last, resulting in the following heavily edited transcript. Indulge…

Sorry I missed you guys earlier, when did you play?

Dominic Apa: We were in the dance tent at 3, which was cool because it was the time most people were probably waking up and coming out their campsites. If we’re going to be booked for a dance tent when actually our second album has a lot of punk in it then maybe it’s a good to be a bit of a mid-day surprise.

Gary Barber: I’d even take being a disappointment as a kind of positive really.

Dominic: Well yeah, if everyone’s been getting pumped listening to Disclosure and then comes to see us then it might be disappointing. But in reality we’ve been listening to a lot of Disclosure too this morning.

Dominic: Well…. By all means do that. The hardest thing about playing a festival set is having to put yourself in the mind-set of someone who’s watching you in a really short space of time and that forces you to approach it differently and focus so much more into it. But once you do that there’s no looking back really and those sets always become the milestones, it may not always be the biggest thing when you’re playing it yourself but for those watching they are often the most telling moments.

Gary: Certainly in terms of press, it’s festivals that become the big milestones of progression. There are certain magazines that would not come and watch our club shows.

Dominic: But fuck those magazines. Fuck the NME, they’re bullshit. They’ll go and tell you that ‘Chocolate’ by The 1975 is the best track of the year. I’m really sorry, that is not the best song of the year, I’m happy to go and put that on my own blog at least.

Fantastic start. So with all of that in mind, what do you think success really looks like these days?

Dominic: At least three people singing your words back to you? Every now and then you’ll come off-stage and someone will feel compelled to come up to you and say ‘I really enjoyed your set’, that’s what success should be really, personal perspectives.

That’s funny because us mere mortals often fear being tiresome or embarrassing ourselves with those kinds of compliments.

Dominic: I know, but someone wouldn’t over-ride the awkwardness of that exchange unless they really meant it. Fundamentally, it’s knowing that something you made in your bedroom six months ago has actually been enjoyed by someone else to the point of that kind of compulsion.

And we’re both idiots, me clearly more than you are, so don’t worry about that.

Do you ever think you’d have been better off ten or fifteen years ago?

Gary: No, I don’t think we would’ve been given a chance.

Dominic: You can’t make money from music these days, so you’ll either be fucking rich because your mums paying the bills or just getting by because you really can’t envisage doing anything else whilst you still have the chance to do music. So I think we’re in a place now where bands are more likely to be passionate about what they do, and at the same time now anyone can make it from their bedroom.

That’s certainly true for music press too, blogs have taken a lot of power back.

Dominic: Respect to the nerds.

How many times do Deftones have to play mainstage before they headline?

Dominic: After White Pony came out, I would gladly wish for Deftones to headline every festival from now until Armageddon. What’s that song where the album was like a Jacuzzi? The single from that album was the soundtrack to me learning how to kickflip.

Okay, do you think it’s better to devote your life to one undivided cause or a million fleeting ideas?

Dominic: One cause, definitely. Don’t get me wrong, humans are really great and they can achieve great things in their lives. But like, turtles live longer than us, we can’t pretend that we can get that much done. There are a lot of people out there with great plans, but I’ve found that the ones who are most successful are the ones who know exactly what they want to achieve and can see it through.

We’ve got to go, but the reason we’re so good at interviews is because we feel like it’s the last chance we’ll have to get our voices recorded onto tape ever, so thank you.