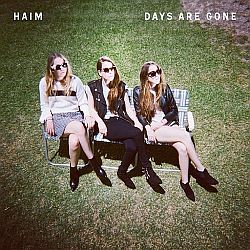 Thanks Wikipedia for your Wildean critique of Haim’s sound. I’ll help them out. If you didn’t think Fleetwood Mac were boring, over-produced, soulless aural wallpaper after 1973, Haim are the girls for you.

And what the fuck does that title mean? Where have the days gone? Can anyone find them? What are we going to do about it?!

Standout track appears to be ‘Don’t Save Me’. To quote Spinal Tap, as I can’t seem to find the words: ‘This one’s just a two word review: Shit sandwich’.

It’s the Del Rey Effect again. Aim manipulated, willing, camera-friendly female firstly at alt audience – when you have sapped that market to the point of murderous irritation, gloss the whole fucking thing up and sell it to the Samsung Kids.

One important difference between Fleedwood Mac, Lana Del Rey and Haim is the existence of songs. Del Rey has at least two, Fleetwood, five or six. Haim don’t actually have any songs, but released an album anyway.

None of this really matters but for the sheer scale of it. Jay Z’s management team and their major record labels try to dress Haim up as the new Hole or L7, knowing full well the band is far more Tiffany fronting Destiny’s Child. Yep, that good.