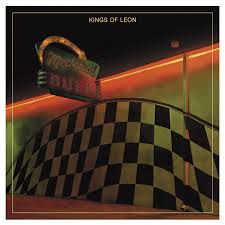 Kings Of Leon always were the hairier, rougher Oasis to The Strokes‘ smarter, more exploratory Blur. Caleb Followill’s familial preacher-progeny crew have had an up-and-down decade, but their ambition was always Coldplay, U2-sized.

Much has been said about Mechanical Bull‘s return to the grit and fizz of début Youth And Young Manhood, but this is just untrue. A far better comparison would be The Unforgettable Fire, X&Y or Standing On The Shoulder Of Giants. ‘:::Bull’ is again a huge-sounding record, but KoL’s problem, similarly to latter-day REM, is they’re not giving their audience anything to hang a coat on.

Never having a strong opinion about the band except for the fact that ‘Molly’s Chambers’ was a fantastic rock ‘n roll song, I came to this album with an open mind, happy to ignore reports of Caleb Followill’s alcohol meltdown, rehab, NME blah-blah, The Mirror blah-blah. Unhelpful, as these life challenges are supposed to give the songs a sharper edge, right? Sadly not, this time around. Warm and fermented as it sounds, there just aren’t enough ideas.

The fact that Followill’s gruff voice is the most is the most interesting thing here is telling. At least their critical nadir but commercial high-point ‘Sex On Fire’ had a quite memorable tune. There are nary here. Inspiration isn’t often inexhaustible, and while this time the production is sympathetic enough to the band’s needs, the powerful songs forgot to be written. Followill sounds broken, but not in a Nick Cave, The Boatman’s Call, eyes-newly-opened way – more in a completely pointless, bored way. On ‘On The Chin’, he sings ‘all my life I was born to lead’. Sadly, with a leader like him right now, no one in his army would want a war.