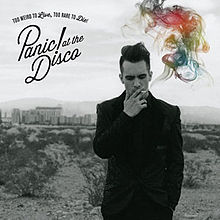 ‘Pretty. Odd’ by Panic At The Disco was one of the poorest albums of the last decade for me, even if I was in the minority on that. Since then, they found their exclamation mark again and released a decent return to form in 2011. Well here we are two years further on from that and the Las Vegas trio have just released album number four, ‘Too Weird to Live, Too Rare to Die!’. Well it ain’t as bad as that dreadful one, you may be pleased to hear, but it sure ain’t that good either. Lots of pretty pretty songs, with more of a jolt than a thump to them and you find yourself listening to a boy band I’m afraid. Sad to say, Bummer Album of the Week.

1 thought on “Bummer Album of the Week: Panic At The Disco – Too Weird to Live, Too Rare to Die!”