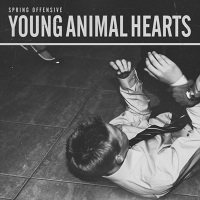 Eight years to release a début album seems an awful long time. In the case of Spring Offensive it comes after a series of record label false starts leading the band to release Young Animal Hearts independently, gaining the funds to do so through Pledgemusic. Luckily however, this long delay in releasing a full length has only seemed to increase the bands resolve and their willingness to think outside the box and the release of this album and its low budget theatrical music videos are testament to the bands work ethic.

Instrumentally Young Animal Hearts is a well rounded and accomplished record. Indie at heart with the occasional subtle post-rock guitar moment, it’s the creative rhythm section that mostly triumphs here, reminiscent of a Total Life Forever era Foals, with snare rim shots, hand claps, tambourines and egg shakers ever present and a disperse bass rhythm that creates an often surprising groove that belies the emotive nature of the bands lyrics. And lyrically it is perhaps where the band are at their most impressive, recalling the prowess of Elbow‘s Guy Garvey and Counting Crows‘ Adam Duritz before they both had too much success and ran out of things to write about. Songs like ‘No Assets‘ are for the affected and financially struggling youth of today; “Our parents didn’t wait for this long to have big ideas and our big homes”. While in songs like ‘Speak‘ the band tackle relationships with a masculinity theme with them announcing “I can’t easily communicate how I feel to you, where I’m from, we tend not to speak until we’re spoken to”.

Young Animal Hearts is the soundtrack to those in the twenty to thirty age bracket, caught in dead-end jobs, or no jobs at all, all the while watching their relationships fail as their lives go nowhere. At times it is musically gorgeous and yet still, lyrically affecting and utterly, emotionally, destructive. If ever an independent record deserved to be listened to, it’s this one.