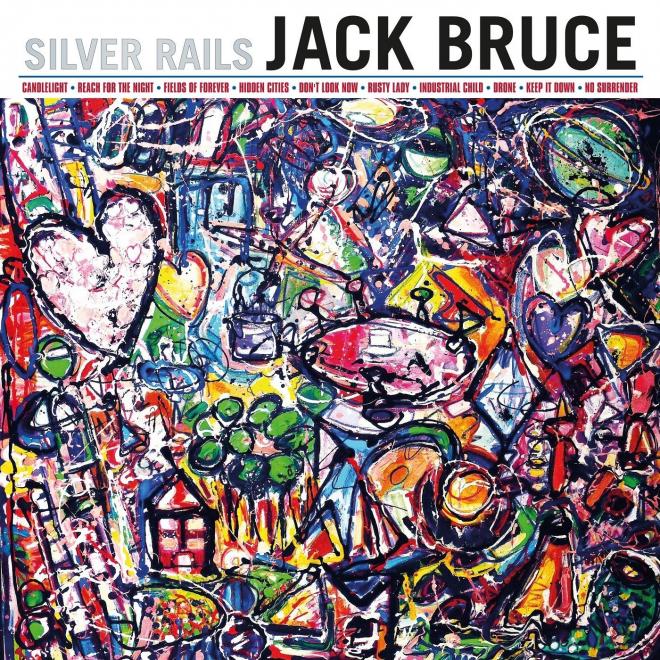 “I used to be somebody”, he sings on Silver Rails, on what is his first solo album in more than ten years. And were this man to be merely reflecting upon his short time as a founder member of Cream, that incendiary power-trio and the world’s first ever supergroup whose light shone so brightly in the rock firmament of the late ’60s that it eventually burnt itself out amidst escalating internal tensions and irreparable acrimony, then his assertion would undoubtedly be true. But this is someone who approaching their 71st birthday has for more than six decades now been writing, recording and performing some of the greatest popular music of modern times. Over the years this man’s name has been associated with those of Graham Bond, John Mayall, Manfred Mann, John McLaughlin, Tony Williams, Lesley West and Corky Laing, Frank Zappa, Lou Reed, Gary Moore, Billy Cobham, Robin Trower, Ringo Starr, Bernie Worrell and, more recently, the American jazz percussionist, Kip Hanrahan. Beyond these many and varied collaborations with some of the finest musicians you could possibly draw from the diverse musical worlds of blues, jazz, rock and the avant-garde, he has also forged his own solo career of which Silver Rails is now his fourteenth studio offering. Along the way he has beaten heroin addiction, cancer, a liver transplant and those interminable battles with Ginger Baker.  The word legend is an often overused, overwrought term, but in the case of Jack Bruce it is an entirely accurate and most fitting description.

Jack Bruce’s first musical love has always been jazz. From the earlier fusion of his classic trilogy of solo albums – Songs For A Tailor, Harmony Row and Out Of The Storm – through a then association with Tony Williams’ Lifetime to his more recent work with Spectrum Road, jazz has been the principal leitmotif of his career. And whilst keyboardist John Medeski and drummer Cindy Blackman-Santana from Spectrum Road do feature on Silver Rails, it is a recording which for the most part sidesteps the more esoteric influences of jazz in favour of those of early British RnB, the blues and in the case of album closer ‘No Surrender’, pure unadulterated rock.

Silver Rails begins, though, with the more gentle Caribbean lilt of ‘Candlelight’, featuring lyrics penned by Bruce’s wife Margaret and a beautifully controlled guitar solo from Phil Manzanera. On ‘Reach For The Night’, where he sounds uncannily like his fellow Glaswegian the sensational Alex Harvey, Bruce looks back upon his life and career in a song which conjures up thoughts about Bible John, the Barrowland ballroom and that no mean city of the 1960s; Medeski’s gorgeous Hammond organ fills and a trailing saxophone capture the mood of that era to quiet perfection.

Vaguely redolent of Cream’s Disraeli Gears, but with a much darker day-glo hue, ‘Hidden Cities’ is a slice of proto-psychedelic metal for which Uli Jon Roth’s lovely understated guitar was most surely written. The lurching blues of ‘Rusty Lady’ reunites Bruce with Robin Trower whose dirty guitar riff embodies the spirit of the song’s scarcely concealed sexuality. For ‘Drone’, Bruce straps on his Gibson EB-1; the menace of the song mirrored by the sheer lumbering size of that guitar’s immense sound. And ‘Keep It Down’ has just got to be this year’s ‘Badge’.

The fluidity and dexterity of Bruce’s playing is consistently impressive throughout, affirming all the reasons why he is only the third person ever to have received the International Bassist Award. Jaco Pastorius and Nathan Watts’ names on this lifetime achievement award tell you all you need to know about the sort of company he is keeping.  And then there is that distinctive voice, the one we must have heard a thousand times before on ‘I Feel Free’, ‘White Room’ and the immortal ‘Sunshine Of Your Love’. It may well have been weathered by age and bruised by the excesses of Bruce’s past life, but it still remains remarkably intact. In fact, if anything and somewhat improbably given the hammer it has been given, its range appears to have increased. Listen to him on ‘Industrial Child’, where he is just accompanied by piano, if you are in any doubt.

On ‘Silver Rails’ Jack Bruce looks back on his life from the vantage point of having spent more than seventy years on this planet. He uses this experience to draw upon many influences from his extensive and illustrious musical past but rather than merely setting out to recreate history with ‘Silver Rails’ he has now produced one of his most consistent, coherent works in years, a record that will stand up to the closest scrutiny of the present day. This is not the sound of a man treading water. On ‘Reach For The Night’, and not content to just dwell on whatever may have been and gone he stares his own mortality right in the face, and then heeds his own advice to “get rolling instead”.

Silver Rails is released on 24th March 2014 through Esoteric Antenna.