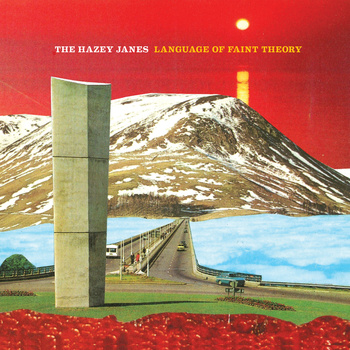 Everything about this glorious record harks back to another time. Be it the collage art of its gatefold sleeve, created from vintage guidebooks of The Hazey Janes home city of Dundee; the tracklisting on the back cover which is split evenly over two sides; or the lyrical content and accompanying music, everything about Language of Faint Theory is steeped in an unashamed nostalgia.

Following the completion of their successful European tour supporting Wilco in 2012, The Hazey Janes remained in the south-west of Spain to record what would become their fourth album, Language of Faint Theory. With the familiar hands of Paco Loco and John Agnello at the production and mixing controls (this same pair had worked on the band’s fêted début long player, Hotel Radio in 2006), The Hazey Janes have come up with their strongest, most cogent release yet.

The Iberian influence of Language of Faint Theory’s evolution can be heard on both its sumptuous title track – where second guitarist Alice Marra assumes lead vocal duty – and in the streamlined elegance of ‘The Genesis’, in which David Guillén Monje’s trumpet serves as a plaintive counterpoint to the optimism of each song’s refined melody. And the sorrowful country-rock of ‘In Shadows Under Trees evokes strong memories of The Byrds’ founding member and doomed lost highwayman Gene Clark and his classic 1974 recording ‘No Other’. But for its most part Language of Faint Theory remains a quintessentially Scottish record.

Those soft Tayside vowels are a clear indicator. Another Caledonian connection can surely be forged with the early 1970s melodic folk-rock of The Sutherland Brothers. And on ‘All Is Forgotten’ Andrew Mitchell’s voice is reminiscent of the reluctant fatalism of Glaswegian trio The Blue Nile‘s Paul Buchanan, even though the song itself drifts into the more sophisticated pop territory charted by The Hazey Janes’ other fellow countrymen Hue and Cry.

A heartfelt homage to the Jute City, ‘The Fathom Line’ is a most glorious burst of guitar-driven, harmony-heavy, power pop that rests its head gently on the musical shoulder of Teenage Fanclub. The album’s follow-up single ‘If Ever There Is A Gladness’ also mines that still rich seam first unearthed by The Byrds and then worked by Big Star, both songs wreathed in the warm smiles of their individual reminiscence.

For all that it may lean upon the past for its lyrical inspiration and musical influence, Language of Faint Theory remains something that is remarkably fresh and alive; a mature, reflective collection of contemporary songs that will surely move The Hazey Janes out of the shadows of their many notable support slots and onto a much bigger stage all of their own.