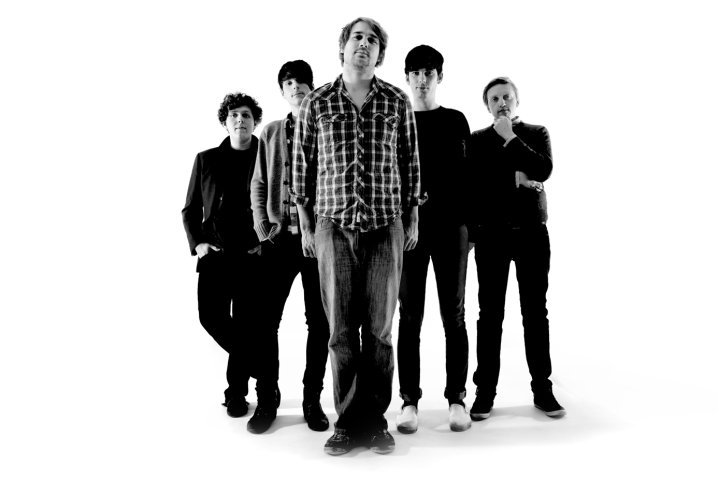 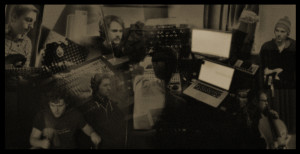 Having welcomed the attention from their critically acclaimed first album, ‘Start/ Stop’, Union Sound Set are back with their own blend of Post Rock, with new additions to their sound of piano and cello, they released their second album, ‘To the Wolves,’ on 19th May.  We talk to Ed Simpson from the band, as they seek to make a deeper impression with this more authentic sound.  Catch them live at their album launch party on May 30th at Hoxton Bar and Kitchen.

Here we speak to Ed about, ‘To the Wolves’, getting back to their ‘real’ selves, what it is all really about, an intense desire to avoid consumerism, in a world where products might well be taking over from us enjoying the moment or realising what we already have. The draining capacity of the music industry and the hoops they have jumped through to get here, as well as writing the soundtrack for a Scorcese film.

SC:  Where are you from?

ES: We’re from different parts of the UK, a few of us are from Suffolk, but we’ve always been a London band.

SC:  How did it all come together?

As USS we’ve been together since 2009, but most of us played together under the previous guise of Prego which formed in 2004, since that time we’ve played with about twenty different musicians. Steve (piano) and Alex (cello) were the most recent to join the band not long after we’d released ‘Start/Stop’. We were touring the record and were looking to strip back the set a bit so invited Alex and Steve to join us. We immediately clicked with them and when the tour finished we couldn’t imagine going back to being a five piece, they both add a great deal and have both played a critical part in the making of this record.

SC:  Why Union Sound Set?  Where did the name come from?

ES:  We were spending a lot of time thinking over names when we changed the name from Prego. It was our guitarist Simon who came up with it, and for us the idea of coming together through sound was a good concept, so we went with it.

SC:  ow would you describe your sound?

ES:  I suppose I’ve always gone with ‘indie post-rock’, I think that sums it up pretty well. It has the expansiveness and dynamic breadth of a post-rock band, but is anchored is song structures. It’s an amalgamation of our favorite bands, from the National and Aereogramme, to Sigur Ros, Mogwai and Explosions in the Sky.

SC:  To the Wolves is your second album, how have things been going since, Start/ Stop, your first album release?

ES:  We had a little bit of time out after ‘Start/Stop,’ it was a record that felt like a long time in coming out, and I think we’d become consumed with everything that comes with putting out a record, concerning ourselves with reviews and radio play. Having released it, we took some time to remind ourselves why we were playing together in the first place. When we came back together we decided we wanted to return to our initial motivation for doing USS, and that was to make music we loved.

SC:  How does ‘To The Wolves’ compare to ‘Start/ Stop’ in terms of themes and sound? How have things devleoped?

ES:  think it’s certainly a more honest record than ‘Start/Stop’, and was very much a record that we wanted to make, as opposed to having any consideration of what we should be making, which was sometimes the case with ‘Start/Stop’. I also think it’s a more thoughtful record, we challenged ourselves to never settle for what was easy or expected and tried to be more diverse creatively. It still retains the expansive elements of ‘Start/Stop,’ but we’ve moved away from being a ‘rock’ band I guess.  I think it’s probably a record that the listener may need to work harder with initially, but for me has a lot more depth than ‘Start/Stop’ and I think is a much more complete record.

SC:  What was it like recording at your self made studios, The Living Rooms? Was it fully functioning?

It was amazing, to be self-sufficient was a real achievement. Dan did so much work on getting the control room built, and we sourced the gear he wanted and managed to get hold of it. It was definitely a learning experience, but one which was really special. Dan is so incredibly talented and he surpassed our expectations with the job he did with it. I love the production on ‘To the Wolves’, Dan has really captured the imagination with it.

SC:  What are your influences as a band?

ES:  They’re pretty varied but generally exist in the post-rock and indie genres. Aereogramme and early Death Cab were big influences for me as were Explosions, Mogwai and Sigur Ros. I’ve always love 90s American Indie bands like GBV, Sparklehorse, Sonic Youth and Pavement. Currently we listen to bands like The National, The Antlers, Bon Iver, Phoenix, The Dodos and lots more.

SC:   What lies behind the inspiration for songwriting? The track, ‘I Can’t So You Will,’ sounds controversial?

ES:  Various inspirations for this record. Much of it is a record about making and releasing a record. When you’ve gone through the process and focused on the ‘business’ side of making music, you realise how much bull shit is involved, and how much you can become affected by other people. It’s draining and suffocates you creatively to the point where you question yourself and what you’re doing, I wanted that to be expressed on this record. ‘I Can’t So You Will’ is predominantly about guilt and being obsessive to the point where it’s difficult to cope with it, a personal frailty.

SC:   If you were going to write the soundtrack to a film what kind of film would it be?

Any Scorcese film would be great.

SC:    What are three things you would like to change in the world?

ES:  think I’d like the Western world to take a few steps backwards. We exist in such a consumer society and everything is so expendable. It makes us lazy and we don’t have to work for anything anymore, we just expect it. I think it’s had a really negative effect on the music industry because art is now available in the click of a button and it’s become like pick n’ mix, take what you want and leave the rest. It’s soul destroying for those who make music, because when you make a record, you want it to be listened to as a record, taken time over as a record, it feels like what does not immediately satisfy is now discarded, it’s all too easy. Is that enough?

SC: What’s coming up next?

ES:  We’ve got a couple of shows coming up this weekend in London and Brighton and then we’re launching the album on May 30th a couple of weeks after its released, we want to give people a chance to hear it before they see the show. After that, hopefully some more UK dates, at the moment we’re just really excited to be getting the record out.