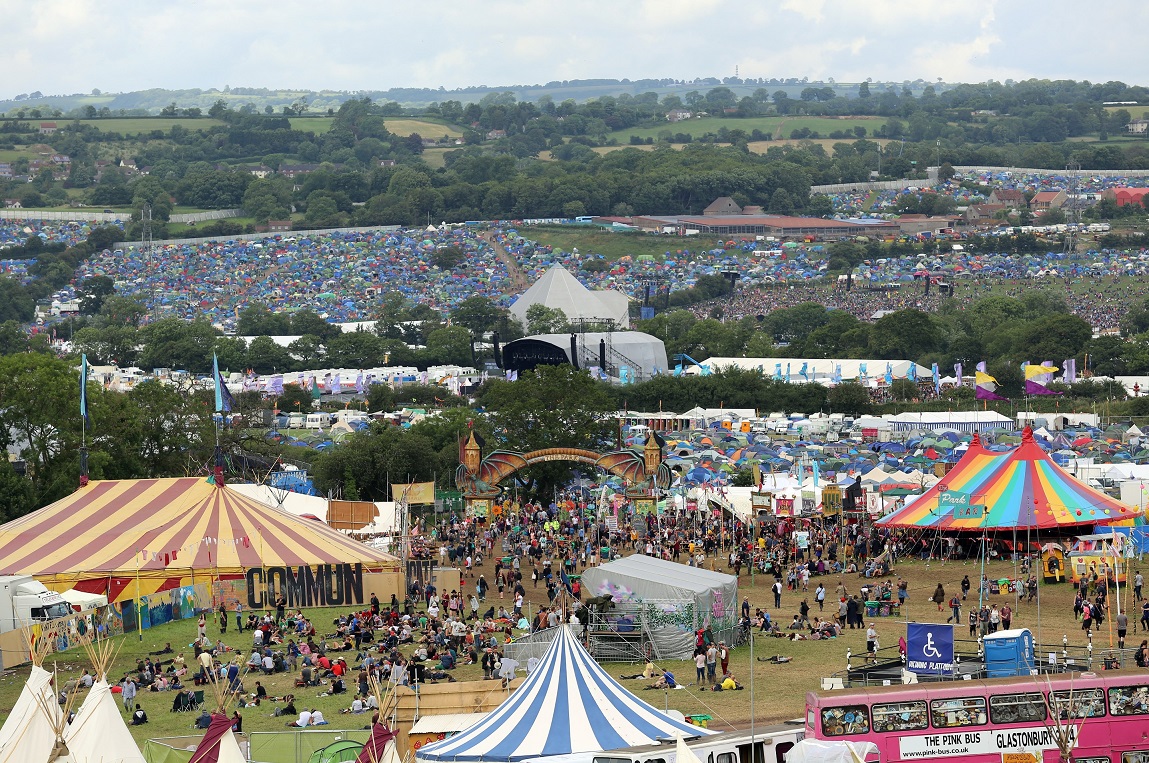 Twelve months ago the greatest music festival in the world was welcoming onto Worthy Farm as its principal headliner the greatest rock n roll band in the world, The Rolling Stones. This year the honour is rather dubiously split three ways with Arcade Fire, Kasabian and Metallica all assuming that position. Such was the furore surrounding the choice of Metallica as the first metal act to headline Glastonbury – perhaps not so much for their line in music as lead singer James Hatfield’s associations with bear-hunting – an on-line petition had gathered great momentum beforehand demanding that they be banned from the festival in protest. Of course similar controversies had courted both The Smiths and Jay-Z’s performances in 1984 and 2008 respectively on the grounds that their music was somehow not compatible with the festival’s grand hippy ethos. Its musical demographic may well change but the Glastonbury spirit clearly still lives on.

Under Friday morning’s leaden skies and more in fervent hope than any real expectation, many head to the Other Stage to see if those rumours about Prince’s surprise appearance will turn out to be true. That the Purple One should suddenly rock up to open on the second stage having already turned down the chance to headline the entire festival seems fanciful at best, but time spent in the Valley of Avalon in the last weekend in June does do strange things to your thought processes. There is no sign of Prince but what we get instead is Ricky Wilson taking time out from his coaching duties on The Voice to lead the Kaiser Chiefs through an unscheduled but most energetic, inspired and hit-strewn set.

A mere two hundred yards away in the Glade, Glastonbury proves that it still has the potential 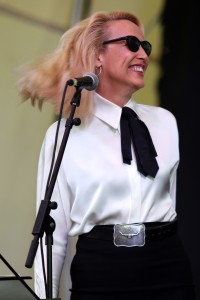 to surprise. Stood there on a tiny stage in front of a mere handful of people is Bob Geldof’s fiancée Jeanne Marine and Texan supermodel and cover star of Roxy Music album Siren, Jerry Hall with their musical creation Paris-Texas and The Uke and making a pretty good fist of how to fuse country and western with electro-pop.

Over on the Pyramid Stage Adam Granduciel of Philadelphia’s The War On Drugs proves that there is still plenty of gold in them their Laurel Canyon hills as he mines a rich seam of early ‘70s West Coast rock, mellow psychedelia and an acute sense of his own battered emotional isolation. By way of contrast in William’s Green, Lias Saudi of Fat White Family has his shirt off (though, thankfully, nothing more at this juncture) and is operating at the other end of that rock n roll spectrum. Best observed from a safe distance, his is an abject lesson in how to create unrefined mayhem, of which the chaotic, searing “Touch The Leather” is a perfect example. 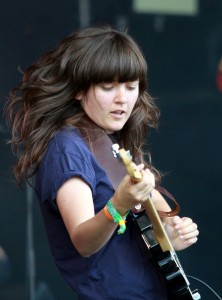 location for some illuminating question and answer sessions with first Gruff Rhys and then Viv Albertine, who opines with remarkable candour on a bewildering array of topics which range from oral sex to Sid Vicious – Jimi Goodwin seems in awe of the magnificent vista of the festival site below him as he takes some panoramic video footage on his ‘phone. As he looks forward to his slot on the Park Stage in a few hours’ time he advises me that he now has the festival firmly in his legs. The Glastonbury vibe has clearly percolated right throughout Courtney Barnett’s body as she responds to what is the clearly evident thrill of playing here by delivering a quite wonderfully endearing performance.

The early evening electrical storm puts paid to the site power for three-quarters of an hour and also seems to blow Merrill Garbus and tUnE-yArDs temporarily off course as they struggle to properly convey their mashed-up, polyrhythmic avant-gardism to the bedraggled West Holts’ crowd. New Zealand oddball Connan Mockasin has no such troubles. He just does what the hell he does, which is to drift off into the ether with fuzzy psychedelics and out-there blissful aplomb.

When Saturday comes Cate Le Bon is ready and waiting back up at the Park Stage. She has 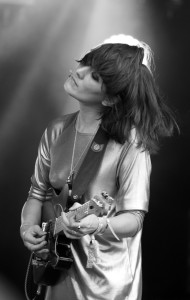 her Welsh compatriot Stephen Black on bass, H.Hawkline on guitars and organ plus drummer Daniel Ward for company and together they make some of the most enchanting music that will be heard over the entire weekend. Hers is an innate skill in how to best marry an almost child-like simplicity with the darker resonance of adulthood.

Someone less comfortable in their surroundings is Lana Del Rey. Appearing in a bright summer dress, she looks vulnerable and diminished against the huge grey, metallic expanse of the Pyramid Stage, something that the helplessness of her dark torch songs merely serves to reinforce. There is a strange disconnect between her and her audience though there can be no denying the indelibly woozy, sexual power of ‘Blue Jeans’ as it reverberates right across these wet Somerset fields.

That it should be almost a year to the day since Bobby Womack signed off last year’s festival in such triumphant style seems to make the news of the great soul man’s passing at 70 years of age even more unbearably sad. It is a loss leavened by The Daptone Super Soul Revue’s appearance on the very stage upon which he sang so well in 2013. The undoubted star of this retro-funk and soul show is Charles Bradley. For many years he was an unknown, part-time James Brown tribute act and just like Womack before him the 63 year old Bradley is a man who is no stranger to rejection, despair and personal tragedy. He captures all of these raw, painful emotions in the awesome, plaintive power of his voice and his ‘The World (Is Going Up In Flames)’ is positively incendiary here today. 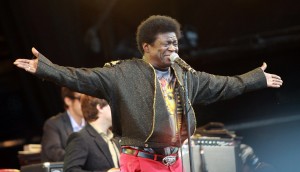 “It is an old folk song that was taken around the world and then forgotten about. Let’s see if we can remember how it goes”. To introduce ‘Rock and Roll’, one of the most definitive rock songs of the seventies by what was probably the most definitive rock band of that era (and any other for that matter) with such disarming modesty says much for Robert Plant and the way that he views his colossal past and the comfort of the place in which he now finds himself. He 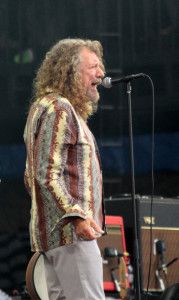 effortlessly mixes his 70 minute set with both the old and new. ‘Going To California’ and a truly blistering ‘What Is And What Should Never Be’ remain respectfully true to their Led Zeppelin originals, whilst he infuses both ‘Black Dog’ and the concluding medley of ‘Whole Lotta Love’ and Bo Diddley’s ‘Who Do You Love?’ with the African influences that have percolated through much of his work since he fronted that legendary band. And he still possesses one of the greatest rock voices of all time.

A man with a similarly notable place in the pantheon of contemporary music is Bryan Ferry. But where Robert Plant embraces, reaffirms and recreates the past, the former Roxy Music singer’s set – heavily populated as it is by old Roxy tunes – is a disappointing example of style over substance as he reduces what were once startling designs in art-rock invention into perfectly pleasant though ultimately shallow slices of music fit for elevators. It is up to Kevin Rowland and Dexys to prove that you can emerge from the other side of abject derision with your soul and integrity intact. The fifteen minute encore of ‘This Is What She’s Like’ is a two-fingered expression of unbridled joy at all those who ever doubted him.

Sunday is almost entirely all about Dolly Parton. Drawing the biggest crowd of the whole weekend to the front of the Pyramid Stage, the undisputed queen of country music transcends 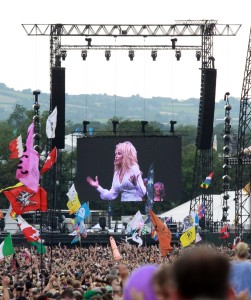 all musical barriers and exceeds all expectations with her absolutely stunning combination of natural hillbilly charm and stellar choice of tunes. Beneath all of that fake glamour, cosmetic enhancement, the white rhinestone-studded trouser suit and outsize hair she is a natural. Such is her confidence in both her ability and material, she loads two of her best loved and most covered songs – ‘Jolene’ and ‘Coat Of Many Colours’ – towards the front of her set; keeps her dramatic powder dry until much later on with the similarly weighted big guns of ‘9 to 5’ and the beautifully tender ‘I Will Always Love You’; unveils ‘The Mud Song’, a charming little ditty she claims to have only written that very morning in homage to the Glastonbury experience; and still has ample time to breeze through the Benny Hill theme tune whilst parping a diamanté saxophone as well as indulging Richie Sambora with a guest appearance for Bon Jovi’s ‘Lay Your Hands On Me, a song which proves that Dolly can also do rock. It seems that there is nothing this simple country girl cannot do.

If Dolly rightly grabs all of the media attention for what is the undoubted crowd-pleasing apex of this year’s festival, the most complete and compelling performance of the weekend belongs entirely to St Vincent. In what seems like an almost unnaturally short space of time, the 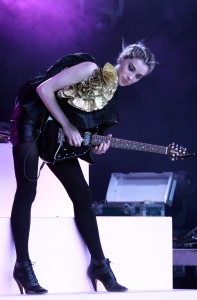 Texan-born New Yorker Annie Clark has metamorphosed from quirky, fledgling musical visionary into fully blown star. Looking and sounding like a multiplicity of exotic, futuristic femme-fatales she climbs into these dramatis personae with untrammelled passion and complete abandon. The music she and her two cohorts produce is some far-out yet quietly controlled modernistic convulsion of electro-funk, progressive rock and jazz inside which her startling jagged guitar, the siren of her voice and fearless, hypnotic presence all vie for your undivided attention. During the coruscating finale of ‘Your Lips Are Red’ she tumbles from the stage, theatrically rejects the amorous advances of the TV camera and morphs into the crowd, emerging shortly afterwards wearing a gentleman’s flat cap. Put quite simply, it is electrifying.

With each passing year, the view that Glastonbury haemorrhages yet more of its hippy idealism gathers greater momentum. Its need to keep pace with the modern world often seems to outweigh its commitment to this once fundamental ethos, a notion that is reflected in the changing, more homogeneous nature of its audience and the more generic, increasingly bland music to which they appear to be attracted. Yet in spite of this and for all the accusations of corporate selling out levelled against it, at its thirty second time of asking the Glastonbury Festival once again proves that it can excite, surprise, occasionally disappoint and perplex, yet still completely overwhelm like no other such experience in life. 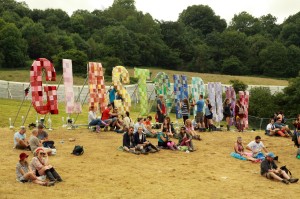