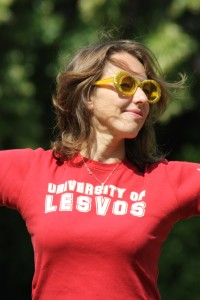 If you happen to be in Auld Reekie over the next week or so be sure to go and see Nineties Woman. Now into its second week at this year’s Fringe – the largest arts festival in the world – Nineties Woman is Rosie Wilby’s reflections of her time spent at York University in the early 1990s when she worked on the women’s newspaper Matrix.

Having stumbled upon some old copies of Matrix last year, Rosie Wilby then set out to find out what had happened to not only the paper but also the other women with whom she had worked on it. A renowned comedian, radio presenter and writer, Wilby utilises all of these talents to great effect in this hour long show as she stitches together an engaging and most appealing narrative from those times.

Through a combination of her own natural storytelling and a multimedia accompaniment Wilby takes the audience on a comedic, often poignant journey back in time as she explores both her own personal development and that of the feminist cause.

A leitmotif of music runs through the show with references to the long since, and sadly gone York independent music shop Red Rhino Records; the bands Nirvana, Primal Scream and Indigo Girls and even features some of Wilby’s own original recordings from that period of her life, including one when she sang some Tracy Chapman songs at a student demo.

Nineties Woman continues its run every day from Saturday 16th to Sunday 24th August 2014 at 12.05pm at Edinburgh’s Voodoo Rooms at 19a W Register St, EH2 2AA. Admission is free.

Full details of the show can be found HERE