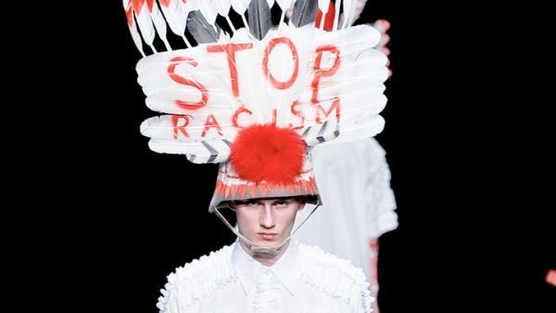 A concerning trend has become increasingly prevalent over the past few years at Glastonbury and other music festivals – that of the wearing of Native American-style headdresses. This summer in particular, I noticed far more festival-goers wearing the headdress as an item of fashion than at previous events – hence this petition (http://www.change.org/p/glastonbury-festival-ban-the-sale-of-native-american-style-headdresses-on-site-from-2015). [N.B. before setting up this petition, I tried to contact the festival office and organisers – to no avail.]

There has long been consensus among indigenous civil rights activists in North America about the wearing of headdresses by non-Natives – that it is an offensive and disrespectful form of cultural appropriation, that it homogenises diverse indigenous peoples, and that it perpetuates damaging, archaic and racist stereotypes. To elaborate, I have included more in-depth sources that expand upon these discussions below, but for a good summary of some of the key arguments relating to the headdress as a pervasive ‘hipster’ trend at music festivals, see: Native Appropriations, “But Why Can’t I Wear a Hipster Headdress?” –http://nativeappropriations.com/2010/04/but-why-cant-i-wear-a-hipster-headdress.html.

Earlier this summer in British Columbia (Canada), Bass Coast music festival announced that it would ban attendees from wearing headdresses out of respect for “the dignity of aboriginal people” [see Sean Michaels, “Canadian festival bans Native American-style headdresses” – http://www.theguardian.com/music/2014/jul/25/canadian-festival-bans-native-american-style-headdresses]. Bass Coast festival is held on Native land, so there is added significance in its case, but there is no reason why other festivals shouldn’t also take action – both in North America and here in Europe.

Glastonbury festival has always upheld a proudly progressive ethos that has encouraged political activism, environmental consciousness and cultural awareness, as well as promoting social justice. I therefore think it is incumbent upon Glastonbury as Britain’s foremost music festival to lead the way this side of the pond in raising awareness of the issues surrounding the wearing of feathered headdresses. If Glastonbury festival took a principled stand in banning the sale of headdresses at stalls on-site and made an official statement about the issue, much needed awareness would be raised and hopefully wider discussions would materialise – the type of discussions that foster understanding and facilitate positive shifts in attitudes.

Please see the below links – further educational material, websites and articles on cultural appropriation and the headdress:

Mimi Thi Nguyen, “The Feather in your Native Cap” –http://iheartthreadbared.wordpress.com/2010/04/21/linkage-the-feather-in-your-native-cap/

My Culture is Not a Trend – http://mycultureisnotatrend.tumblr.com/

Zak Cheney-Rice, “Why So Many American Indians have an issue with Coachella” –http://mic.com/articles/87709/why-so-many-american-indians-have-an-issue-with-coachella

Dorian Lynskey, “This means war: why the fashion headdress must be stopped” –http://www.theguardian.com/fashion/2014/jul/30/why-the-fashion-headdress-must-be-stopped

I hope that the above readings help to inform a campaign that leads to the festival commiting to an enlightened policy from 2015 onward. If Glastonbury leads the way in the UK, other festivals would surely follow suit.