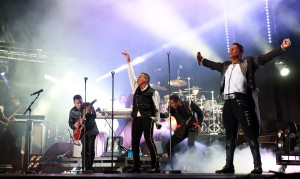 Late on Saturday night a kaleidoscope of colour fills the sky over the grounds of the Hardwick Hall Hotel in County Durham. This spectacular fireworks display is an exultant finale to the second annual Hardwick Live Garden Party. It also signals the end of a truly magnificent show by The Jacksons. In what was a remarkable coup for the event, the organisers brought Jackie, Tito, Jermaine and Marlon – the four remaining members of The Jackson 5 following the death of their brother Michael five years ago – to the North East of England to headline the party.

Expanded this year to two days, local rock band Twister get the party started early Friday evening. It should then come as no surprise to find that given the similarities between them and Arctic Monkeys, the next act up on the main stage The Sherlocks also hail from Sheffield.

With their piano-thumping, infectious pop tunes and boys-next-door charm, the platinum selling Scouting For Girls fit perfectly with Hardwick Live’s feel good ethos. Interspersed as they are between the band’s own toe-tappers such as ‘Famous’, ‘It’s Not About You’ and their number 1 single ‘This Ain’t A Love Song’, quick blasts of Elvis’s ‘Can’t Help Falling In Love’ and Paul McCartney’s ‘Live and Let Die’ give further opportunities for the crowd to sing-along.

Closing out Friday night on the last date of an 18 month world tour, Simple Minds bring gravitas to the occasion. The opener ‘Waterfront’ is stirring. A number of songs then descend 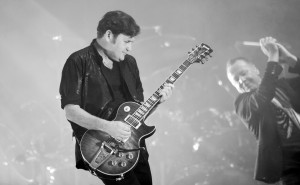 into the overblown pomposity and bombast which has bedevilled their later years, but ‘Promised You A Miracle’, ‘Glittering Prize’ and ‘Someone, Somewhere in Summertime’ – all from 1982 and the band’s heyday – are huge swathes of powerful electro-rock and further reminders of the place they have as foreseers of modern dance music.

Saturday begins in earnest with Emma Garrett. The young singer-songwriter from London is evidence of Hardwick Live’s efforts to balance the nascent with the nostalgic. She and her band strike up an impressive chord with a set packed with energy, ebullience and dramatic pop/folk songs of which her first single, ‘Dose Me Up’ and ‘This Is It’ – taken from the same EP – are fine examples.

Another platinum record seller, the 1990’s English soul singer Kenny Thomas puts in an effortless greatest hits show, including his 1991 chart successes ‘Stay’ and ‘Best Of You’. Sticking in the same decade, the reunited Dodgy whilst not quite heralding a full scale baggy renaissance do bring some breezy, jangly pop songs to the party. In homage to the evening’s headliners, they even manage to preface their biggest hit single ‘Good Enough’ with a totally unrehearsed snatch of a Jacksons’ tune.

Despite performing material from his new album Totem and Taboo, the reinvention of ‘Golden Brown’ with a tom-tom tattoo and a faithful encore of ‘No More Heroes’, Hugh Cornwell reaffirms that The Stranglers are always going to be more than the sum of their parts. Another man unable to fully shake off the shackles of his past is Steve Harley. The opening salvo of ‘Here Comes The Sun’ and ‘Judy Teen’ is impeccable, but his work as an older man pales by comparison. 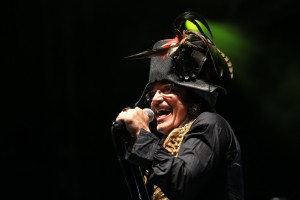 Adam Ant is a man who has known pop stardom, ridicule and mental anguish in roughly equal measure yet he still rises above all of his yesterdays in a show that reveals all of his emotional strength and true post-punk spirit. There is something vaguely absurd about a man who will be 60 years old in November prancing around the stage in a Napoleonic hat, feathers, a brocade military shirt and knee-length leather boots whilst vigorously slapping his thigh in a camp show of sex and mild sedition. Yet for all that, backed by his two drummers and twin guitars he is still capable of producing a set full of twisted punk-pop jewels. ‘Dog Eat Dog’, ‘Xerox’ – before which he straps on his Gibson SG for the first time – and a thrilling ‘Goody Two Shoes’ all attest to the fact that it is so good to have him still with us.

But Saturday night – in fact the entire Garden Party – was always going to be about The Jacksons. And their mesmerising performance proves just that. Not for nothing are they the Motown record label’s biggest selling act of all time and they created musical history in 1970 when their first four singles “I Want You Back”, “ABC”, “The Love You Save” and “I’ll Be There” all topped the Billboard Hot 100 chart. That they should now be performing in the admittedly very picturesque lake and woodland surroundings of Hardwick Park just outside of the civil parish of Sedgefield is really quite astounding.

These may be men who are now of a certain age but their energy, professionalism and sheer undoubted class ensures that their show never even sails remotely close to those end-of-the-pier accusations routinely levelled at so called heritage acts. The opening of ‘Can You Feel It’, as the four men emerge from the back of the stage in a swirling fog of dry ice, is sheer Hollywood high drama. ‘Blame It On The Boogie’ and the 1972 Jackson 5 hit ‘I Wanna Be Where You Are’ follow in a truly mesmeric combination of choreographed song and dance. 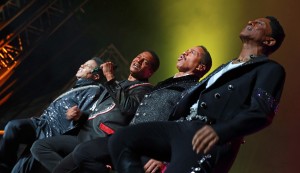 renowned American host Ed Sullivan on his own show back in May 1970 – something that merely serves to confirm The Jacksons position in the pop firmament. Michael Jackson’s presence is always there and there is a deep poignancy in seeing him on some of the archive film that accompanies parts of the show. Yet for all of his absence – possibly felt most acutely when his glorious falsetto is sorely missed on ‘I’ll Be There’ – for ninety minutes here tonight Jackie, Tito, Jermaine and Marlon still produce a stunning reminder of why The Jacksons will always maintain their undisputed place in the highest echelons of the history of popular music.

Though it does have a place in its schedule for showcasing young local talent, the Hardwick Live Garden Party does lean very heavily on the concept of nostalgia. It makes no apology for this. And nor should it do for when you can experience first-hand the sheer majesty of pop royalty that is The Jacksons and see thousands upon thousands of smiling, happy people dancing and singing along in euphoric unison to them you quickly dispel any cynical notions you may have once held about the questionable value of such events.