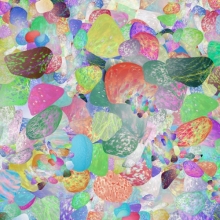 Grumbling Fur are the combined talents of aural conjurers Daniel O’Sullivan and Alexander Tucker, with ‘Preternaturals’ they have crafted one of the most delightfully transcendental ornate, affecting pop albums to be released in 2014. The follow up to 2013’s ‘Glynnaestra’  ‘Preternaturals’ houses nine glowing awe inspiring musical trinkets embellished by a freedom, experimentation and laced with twin vocals that are the sound of redemptive chants, emotive croons and haunted by the ghosts of pioneering records of the past, yet retaining a indefinable originality rooted in their experience, their lives, their craft.

Bubbling, bleeping, enlightening heads and coursing through veins, their sound could be plotted somewhere on a map between the delicious electronic psych suites of Animal Collective‘s ‘Merriweather Post Pavilion’ and the beguiling hauntings of Talk Talk and melodies of Tears for Fears. But these comparisons are crude because Grumbling Fur are original mavericks of their art, distilling a sound that is resolutely their own, surfing lines of electronica, jazz, folk, space rock and psych, and playing with found sounds, pushing the boundaries of what they can create: recording flutes into a Dictaphone, then messing with the speed, a creaking airing cupboard door and a small toy with bells inside. They are daring to voyage into uncharted homespun terrains yet retaining a sharp, hypnotic pop quality.

‘Preternaturals’ is the idea of “fear that human beings are outside of nature… everything can be elucidated by nature but that we don’t have access to that”. Preternaturals is the aural equivalent of a trip, of letting go and peeking behind the known and unravelling the unknown. It expands further upon the duo’s thirst for audio otherworldliness that still retains their personalities “Dan and I want to catch glimpses of that, to catch glimpses of the other side,” reflects Tucker. “To see the ground. As with any psychedelic music, it’s transportative. It’s quite healing really, just flying down tunnels of awesomeness and imagery and just letting go.”

The sublime and haunting stand out  track ‘All the Rays’ captures this feeling, glitching beds twitch tenderly, while Tucker and O Sulivan’s intertwined voices, insidiously enchant “everybody’s tied to the mainland/everybody is changing their minds’ they refrain, upon a swelling sea of expanding modernistic psychedelia both cinematic and universal yet pointed and personal: this is SO much more than just another retro recording. The gorgeously throbbing ripple of beats and wistful vocals that characterise the spiritual ‘Secrets of The Earth’ are unmistakable and dreamlike (‘running like the animals our legs entwined tonight’) each vocal couplet possessing a loving, nurturing, while a haze of permeating static guides the way through the darkness.

Preternaturals was recorded between January and April 2014 in a 1930s house in Tottenham owned by the artist Ian Johnstone. With a dense woodland garden planted with healing perennials and walls hung with art by visionary occult painter and illustrator Austin Osman Spare. ‘Lightinsisters‘ a collaboration with The Charlatans ‘s Tim Burgess, is a tribute to this building, a song about change, ushered in by dappling synth loops that are the sound of blinking lights in industrial skylines, this bricolage of found and mechanical sounds are somehow reminiscent of an unlikely yet wonderful union between the meditative lyrics of early Pink Floyd and the dystopic electro ripples of OMD. Grumbling Fur’s ability to add warmth and glow and humanity to sounds created by machines is one of their many strengths. Case in point is the 29 second obscure introductory track ‘Neil Megson Fanclub’ their tribute to the lasting influence and legacy of Genesis P-Orridge, COUM and Throbbing Gristle.

‘Feet of Clay’ meanwhile is rooted in almost rational vocal melodies and strings that undulate almost like a Beatles song, yet still embellished by the clip and clack of beat and shot through with a visionary lyrical quality that renders it on the level of the best works of Four Tet were you are unable to see the join between experimentation and song. ‘Mr Skeleton’ cascades down stairs upon a carpet of spindling acoustic and haunting folkish vox, sewn with homespun lyrics this is a Beta Band-esque gem that’s title quite fittingly curtsey of O’Sullivan’s young daughter. “It’s something that Ivy said around Halloween,” he recalls. “‘Daddy, Mr Skeleton’s a friend isn’t he?’ Meaning, ‘We’re making light of all this, aren’t we?’”

Closing with the creeping menace of ‘Pluriforms’ is laced with Docotor Who-esque alien distress signals, crying flutes, aching keyboard sounds and recounting through sci fi bleeps their tale of being abandoned on the hull of a doomed spaceship. Perhaps this is tale is an echoing of the encroaching doom of a sometimes bewildering modern world? Given credence by what they say about the song “plummeting and drifting towards the nebula. Science fiction is never about the future. It’s always about now.”

Grumbling Fur are that rare thing in the current musical climate, a duo who peek beyond the horizon, who craft a sound that whilst it might rustle with warm reminiscences for artists of the past, is still uniquely rooted as it is in the present and future sound. It sounds quite like nothing else you’ll hear this year. Preternaturals is utterly transformative.