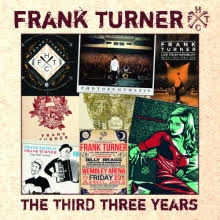 Being a fan of Frank Turner is a hard job. With all his album and EP releases, the endless touring schedule, guest-appearances and all manners of other auditory wonders he bestows upon us, it really is difficult to keep track his latest endeavours. Then there are the times it’s really hard. The times you have three people trying to get tickets for his latest spit’n’sawdust toilet circuit tour to no avail, the times you ardently defend the man to his harshest critics even though you know, deep down, that some of the criticism is just. Then there’s times like this.

Every three years, Turner has released a compilation album documenting his career thus far. Now aside from making established fans feel really, really old, these compilations serve as a fantastic summary of Frank’s journey from folk-punk troubadour in to a fully-realised, incredibly competent singer-songwriter. Featuring an array of covers, B-sides and stripped-back renditions of tracks from his albums, these milestone releases are a cross-section of Turner’s career in sizeable, yet digestable chunks. Interestingly enough, what sets The Third Three Years apart from its earlier counterparts, is his choice of both the covers included and the more sombre choices of his own material.

‘Plain Sailing Weather’ is still paradoxically uplifting despite the subject matter, and a rousing live inclusion of ‘The Ballad of Me and My Friends’ is, as always, brilliant. There’s a distinct lack of novelty features though; no ‘Build Me Up Buttercup’, no ‘Dancing Queen’ equivalents. And whilst this doesn’t lessen the listening experience any, it does suggest a notable maturing within Turner as a musician since the release of The Second Three Years. What’s more, the only nod to Turner’s punk roots comes in the form of ‘Keira’, originally a track by the late front-man of No Use For A Name, Tony Sly. And again, this doesn’t detract much from the overall record, but since covers of NOFX‘s ‘Linoleum’ and Bad Brains‘ ‘Pay to Cum’ have been stand out moments on the previous two Years iterations, it would have been nice to a couple more nods to his heritage thrown in for posterity.

Insignificant gripes aside however, and The Third Three Years is probably the most consistent of the three; from the desert dust-caked ‘Fields of June’ to an impassioned rendition of Springsteen‘s ‘Born to Run’, it’s clear that Turner has broken in to his stride of late, become more confident as a songwriter, though it’s perhaps not the best album for newcomers to discover Turner through, ultimately more a record for those of us who’ve been there for the last nine years and for those of us for whom it’s been a pleasure to watch Turner grow and evolve.

There’s a line in one of Frank’s earlier tracks, ‘Don’t Try This At Home’ which states “There’s no such thing as rock stars, there’s just people who play music, and some of them are just like us, and some of them are dicks.” and it’s this mantra that Turner seems to be live by; happy playing for thousands of fans, old and new in arenas, and perhaps happiest playing for hundreds of die-hards in a tiny pub in Manchester. Either way Frank Turner isn’t a rock-star, and he is, for the most part, just like us, only he has a platform to say what we’re all thinking. And that is exactly why we keep coming back.