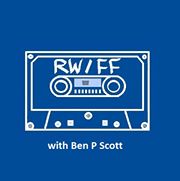 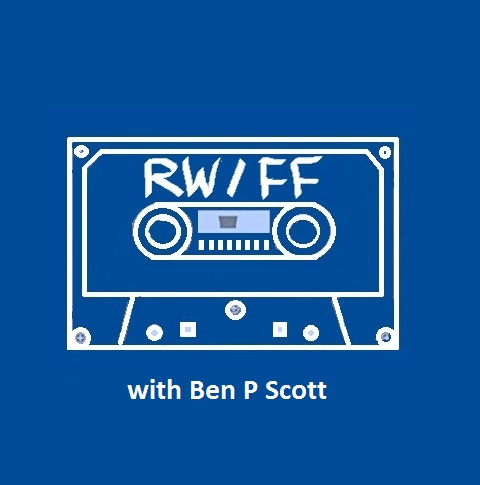 The latest RW/FF round-up features new music from East India Youth, Drenge, Black Rivers, Crushed Beaks and Tuff Love, as well as a look back at the singles making the charts 20 years ago in 1995, which include Suede, R.E.M, and Escrima. There’s also a bit of Visage in tribute to the late great Steve Strange, and classic tracks from The Smiths and Bob Marley to celebrate some notable anniversaries…

William Doyle has come a long way since his days as frontman of indie combo Doyle And The Fourfathers. Over the last couple of years RW/FF has seen his rise as East India Youth, and following last year’s Mercury-nominated debut album ‘Total Strife Forever’, he’s now preparing to unleash his second full-length. 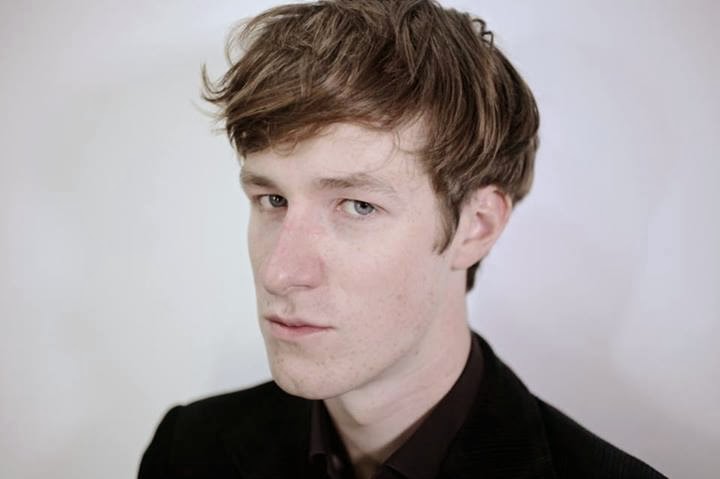 The beautifully minimal ‘Carousel’ is the first track to be taken from the new LP ‘Culture Of Volume’. The record will be the first East India Youth material to be released via XL Recordings, and comes out on April 6.

‘Total Strife Forever’ was named as one of RW/FF’s Albums Of 2015 HERE and a full review of it can be found HERE. 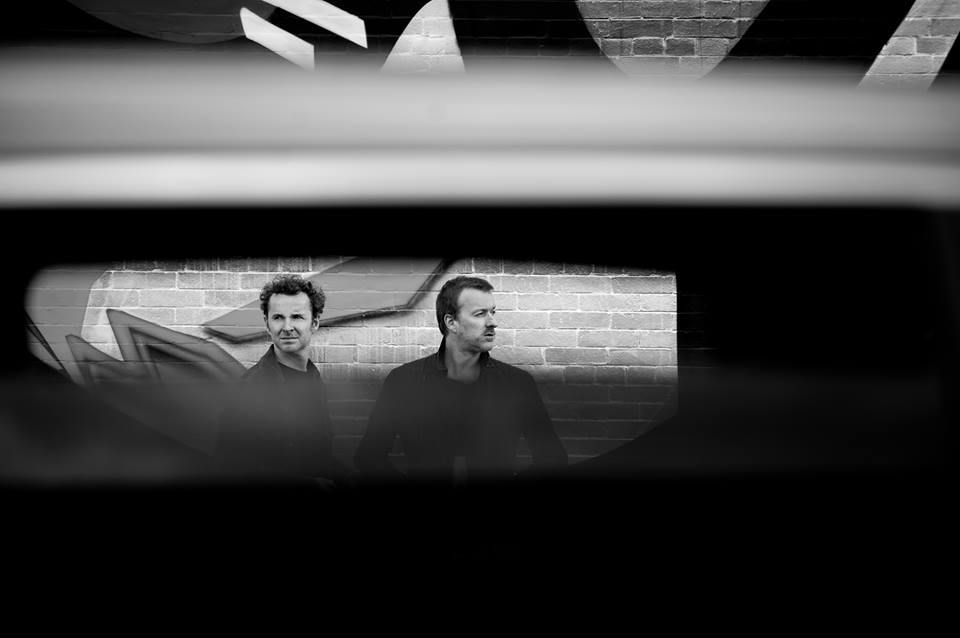 Black Rivers are a duo made up of brothers Andy Williams and Jez Williams, who also make up two thirds of the Manchester band Doves. This week (February 9) they released their self-titled debut album, from which this brilliant track is taken. While their last single ‘The Ship’ dealt in haunting electronics, ‘The Forest’ goes down a more psychedelic route.
The band will be on tour over the next few months, supporting Noel Gallagher’s High Flying Birds and Elbow on their UK tours.
https://www.facebook.com/BlackRiversOfficial
https://twitter.com/Black__Rivers 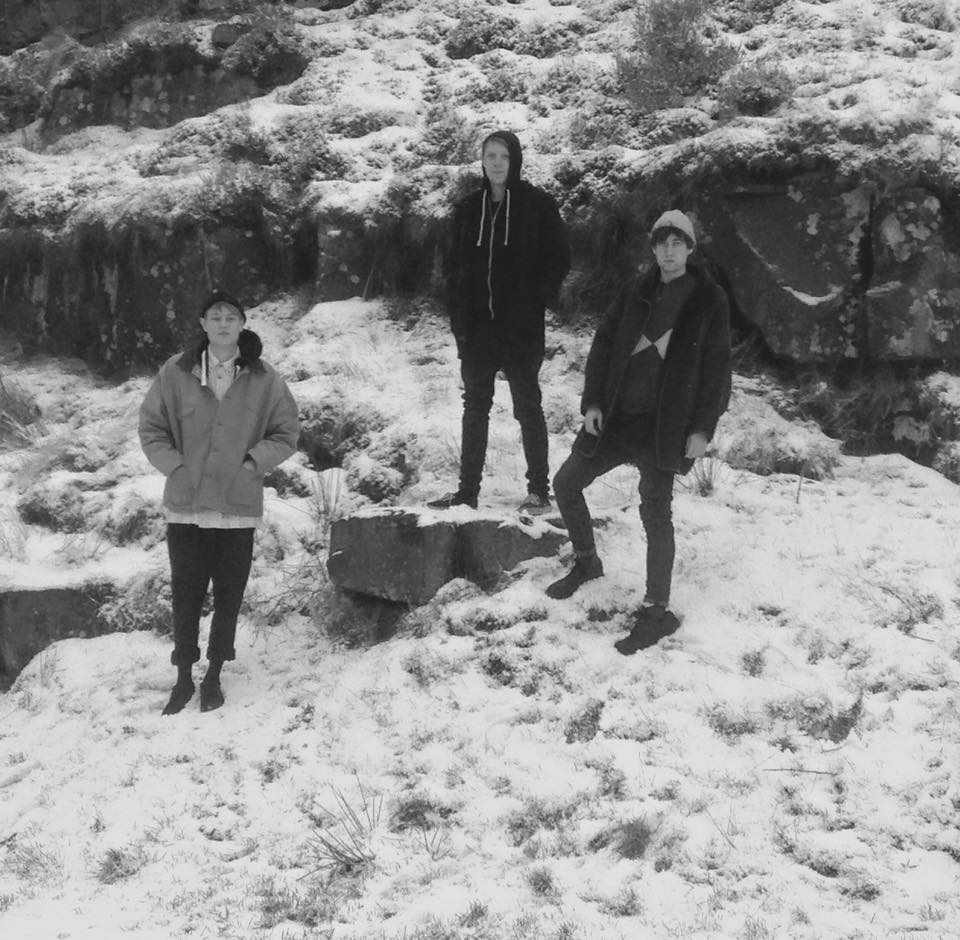 This cracking slice of melodic indie pop is taken from ‘Scatter’, the debut album from London-based trio Crushed Beaks. It’s out this week, and was co-produced and mixed by Pete Hutchings at Octopus Studios, Rome. The band are made up of Alex Morris, Matthew Poile and Scott Bowley. Their bio says that “Poile and Morris bonded over this shared love having met through mutual band friends – everything from classic Argento to the ultimately obscure ends of Italian slashers. Once the two met creatively over a rough set of demos that Poile had written out of his shed, Crushed Beaks became a roughshod, DIY force that embodied their heroes cinematic ethics.

Poile’s pop sensibilities consistently shine through the dusk of reverberated guitars as Alex Morris relentless drumming brings an inimitable life to each song. Comparisons to the likes of No Age and My Bloody Valentine go some way to encapsulating the urgency of their sound – but go little way in experiencing it in person…”
https://www.facebook.com/crushedbeaks
https://twitter.com/crushedbeaks 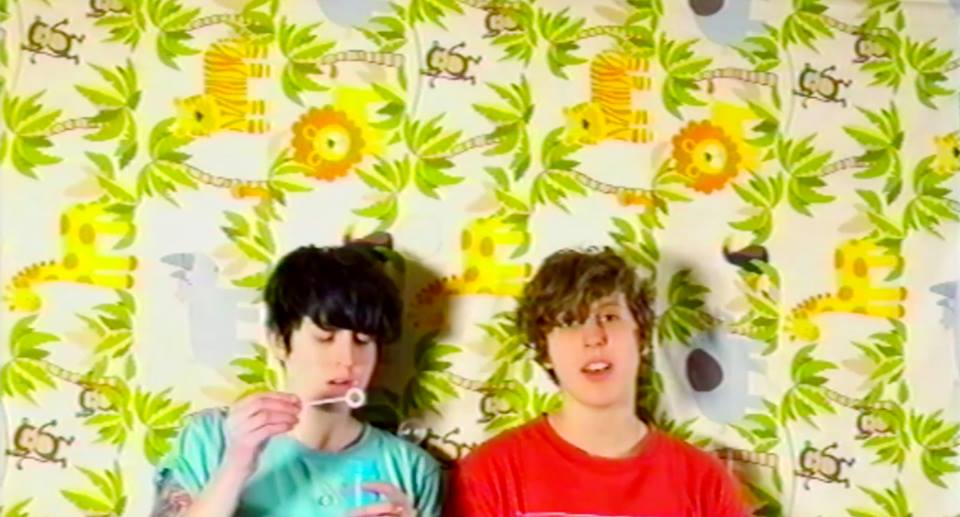 Glasgow-based fuzz-pop duo Tuff Love released their new EP ‘Dross’ this week (February 9). With the pair self-producing the EP, they have also self-made the video to the song which can be heard below. The ‘Dross’ EP is available on 10″ pink vinyl via Lost Map Records. 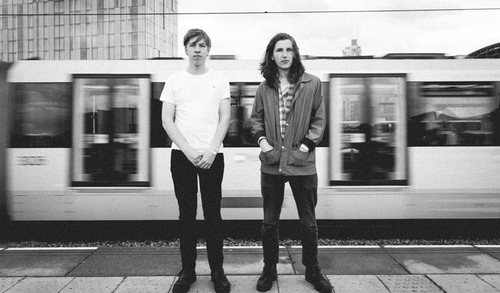 The UK-based post-grunge duo Drenge are back with a fantastic new track. ‘We Can Do What We Want’ is just under 3 minutes of raucous guitars and insistent melodies, and is taken from their upcoming second studio album ‘Undertow’. The LP is released on April 6 and was produced by Ross Orton. It will also feature bass player Rob Graham joining brothers Rory and Eoin Loveless for three of the tracks, including this one.
‘Undertow’ follows on from their self-titled debut, which was released back in 2013.
https://twitter.com/drenge
https://www.facebook.com/drengeboys
Rewind

It’s time once again to have a look at the new entries making the UK singles chart 20 years ago in 1995. Every week a Twitter account called @ThisIsMyJam95 invites followers to pick their favourite new entry of the week, and I have decided to take it a step further by listening to ALL of the new entries before picking the best of the bunch. This week’s chart comes from February 4th 1995 and can be seen in full HERE.

At number 27, Luther Vandross beats the likes of Boyz II Men at their own game with the smooth ballad ‘Always And Forever’, but it’s understandable why people were turning to British music for their excitement rather than such blandly produced American soul. At 31, The The’s meat-and-potatoes rock cover of Hank Williams’ ‘I Saw The Light’ isn’t exactly brilliant either. I quite liked M People back at the time, but like their other efforts, the pale number 11 ‘Open Your Heart’ is quite a weak thing to have in your ears. Not quite as bad as the week’s highest new entry at #7, MN8’s dreadful ‘I’ve Got A Little Something For You’, which sounds just as shallow and monotonous today as it did then.

At 17 were Perfecto Allstars with their floorfilling update of ‘Papa’s Got A Brand New Pigbag’, but winning my prize for the week’s best new entry are R.E.M, whose superb number 29 hit ‘Crush With Eyeliner’ was taken from the previous year’s ‘Monster’.

The next week’s chart is from February 11, and can be seen in full HERE. At number 39, the weak ‘U Blow My Mind’ proves that without Dr Dre and a Bill Withers sample, Blackstreet seemed tame and rather lost, while Adam Ant’s pale stab at Britpop, the number 32 ‘Wonderful’ was in fact a case of woeful, as is China Black’s feeble ‘Almost See You (Somewhere)’, which came in at 31. Cyndi Lauper’s overblown ballad ‘I’m Gonna Be Strong’ was at number 37, and Jimmy Nail’s number 17 entry ‘Cowboy Dreams’ sounds just even more lacklustre now than it did then, I can recall being quite keen on Sting and white-man-accompaniment-for-hire Pato Banton and their awful ‘This Cowboy Song’, which is this week’s highest new entry at 15. Not so keen now.

In terms of the songs I do like, Weezer’s ‘Undone (The Sweater Song) an enjoyable bit of stoner rock at 35, Sheryl Crow’s lovely ‘Strong Enough’ went in at 33, and Apache Indian and Tim Dog’s ‘Make Way For The Indian’ provided some tough ragga-infused hip hop at 29. It’s a well known fact that I find 90s RnB extremely dull, but American trio Jade were better at that sound than TLC or Destiny’s Child ever were, and their ‘Everyday Of The Week’ is an enjoyable number 19 entry. It should kind of go without saying that Suede‘s astonishing number 21 ‘New Generation’ is my new entry of choice. It was the first Suede record (or in this case cassette) that I ever bought, and it remains one of my favourite songs from this legendary group. Written by Brett Anderson and Bernard Butler (who had left the group by that point), ‘New Generation’ was the third and final single from the 1994 album ‘Dog Man Star’, After many years of missed chances and lost hope, I finally saw Suede live in 2013, at a magnificent gig they played at the Bristol Academy. You can read a review of that HERE. Fittingly, the glorious ‘New Generation’ was the final song of the night. I’m glad that I decided to film that performance (in which Brett strikes a great Top Of The Pops-esque pose), which can be seen along with the original ‘New Generation’ video below.

My other favourite of that week’s entries is Escrima‘s funky house nugget ‘Train Of Thought’, which entered at 36 that week. Escrima is one of the aliases used by house DJ/producer Tall Paul, who is one of the names playing at the Karanga 21st Anniversary Party. It takes place at the Komedia in Bath on May 15, and tickets are on sale now. 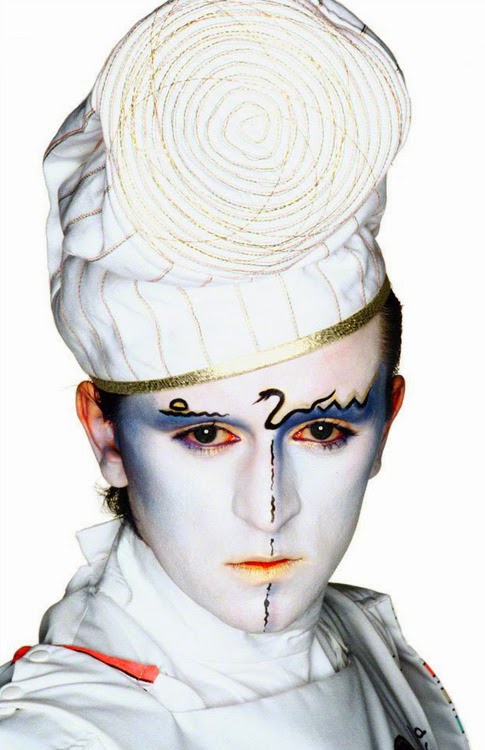 It was unbelievably sad to hear that 80s new romantic legend Steve Strange had passed away this week at the premature age of 55. The frontman of Visage was not only a great artist and performer, but also a fantastic character and a bloody good person to talk to, as I did once or twice. In fact we had a great chat about the state of modern popular music, and agreed on many points. Up until last year I was only aware of their still-astonishing megahit ‘Fade To Grey’, but after finding a vinyl copy of the self-titled 1980 LP ‘Visage’, I wondered why I hadn’t investigated more of this music before. For the price of £1 it was indeed an absolute bargain.
His former musical partner Rusty Egan said that they had been “friends for 25 years and foes for less than 5 years… The good times outweigh the bad…”. In a brilliant article that you can read HERE, The Guardian paid tribute to Steve, writing that “there were more famous new romantic bands than Visage, and maybe even one or two singles as good as Fade to Grey, but the late Steve Strange’s group embodied the style more than anyone else.” 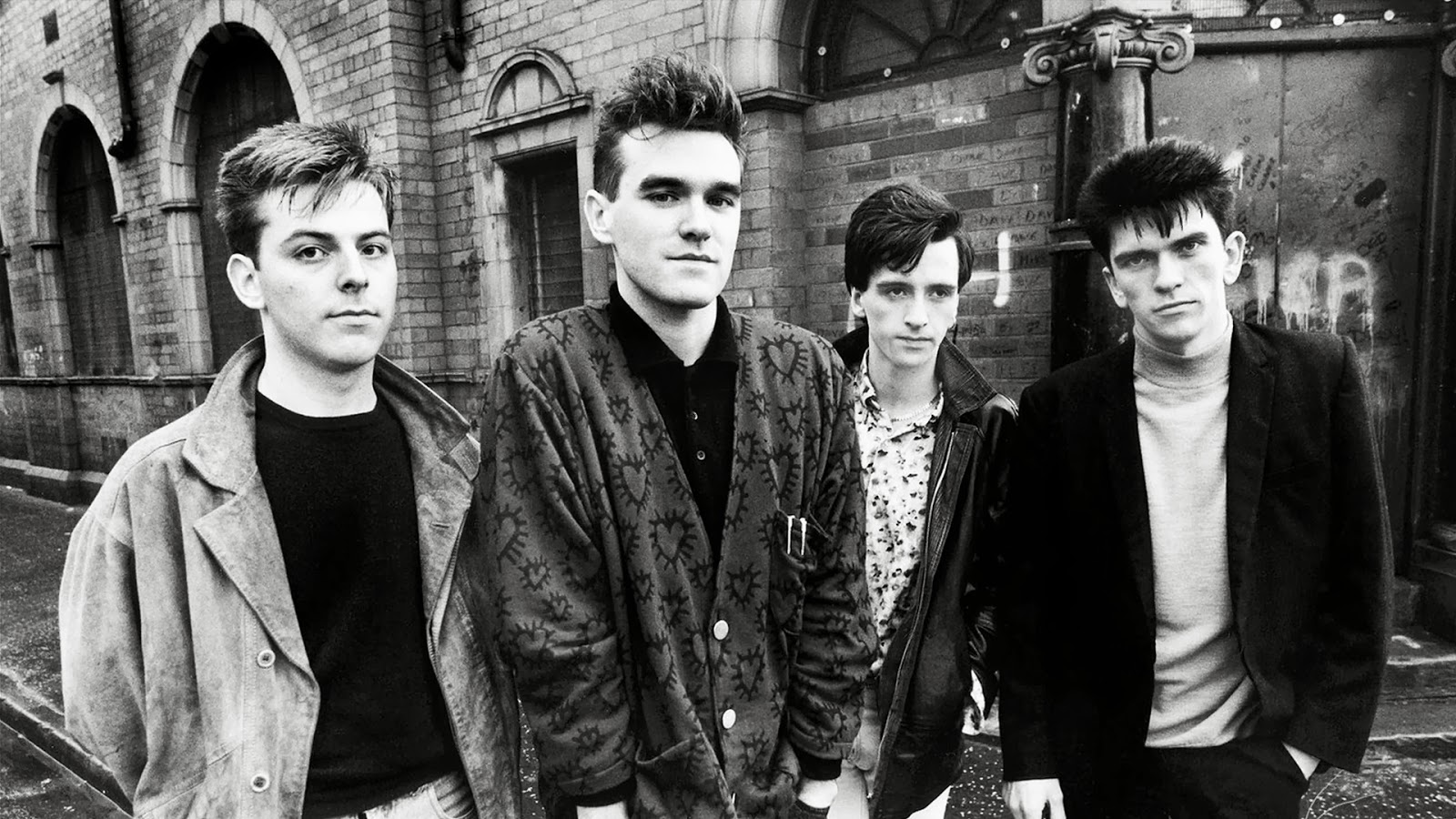 Exactly 30 years ago this week (February 11) indie legends The Smiths released their second studio LP, ‘Meat Is Murder’. It became the band’s sole number one album in the UK charts during the band’s lifetime, staying on the chart for 13 weeks. Morrissey and Johnny Marr produced the album themselves, assisted by engineer Stephen Street, who they had first worked with on the session for ‘Heaven Knows I’m Miserable Now’. The album’s sleeve uses a 1967 photograph of Marine Cpl. Michael Wynn in the Vietnam War, though with the wording on his helmet changed from “Make War Not Love” to “Meat Is Murder”.

From the classic LP is the opening track ‘The Headmaster Ritual’, which is said to be a statement against corporal punishment. 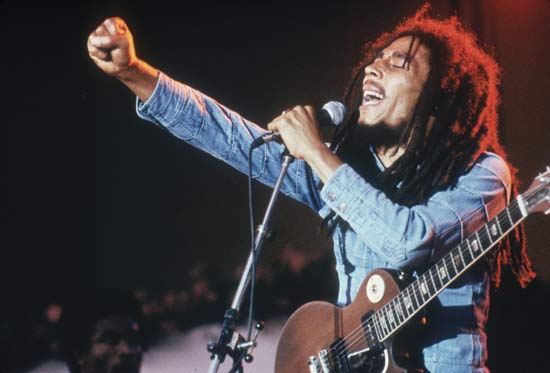 Earlier this week on February 6, it would have been reggae legend Bob Marley‘s 70th birthday. To mark the occasion I listened to a couple of his albums yesterday, including the 1979 LP ‘Survival’. It’s an album with an outwardly militant theme, in contrast and probably as a reaction to the laid-back, ganja-soaked atmosphere of his previous release ‘Kaya’. From it here is the brilliant ‘One Drop’.

Bob Marley’s 70th birthday year will include a variety of releases and events to commemorate the legend, his work and iconic impact.  Over the course of the year, his legacy will be remembered by new releases of rare and unreleased material as well as fan favorite deluxe editions of his most memorable work.  The first release will be available on February 17.   BOB MARLEY & THE WAILERS – EASY SKANKING IN BOSTON ’78, features two historic live shows from Boston’s Music Hall, June 8, 1978.  This new and unreleased performance  is from the Marley family giving unprecedented access for the first time to their  personal material from their private collections and their vaults. The album will be available on blu-ray/cd combo pack as well as dvd/cd and standalone cd versions. Today, Bob Marley remains one of the 20th century’s most important and influential entertainment icons. Marley’s lifestyle and music continue to inspire new generations as his legacy lives on through his music.

Back again next week. Bye for now.