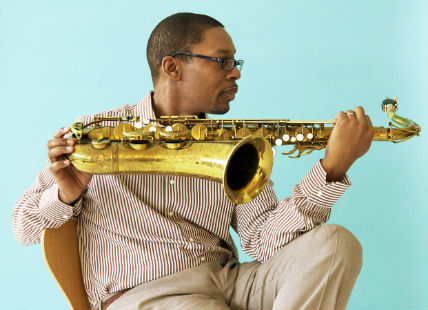 In less than a month’s time, and as part of its diverse and imaginative winter season programme of cultural events, Opera North will welcome to its Howard Assembly Room in Leeds Grand Theatre the saxophonist and composer Ravi Coltrane. The man with one of the most famous surnames in the history of jazz music – his parents were the pioneering jazz saxophonist John Coltrane and his second wife, the celebrated jazz pianist and harpist, Alice Coltrane – will be performing in the 300 capacity Howard Assembly Room’s magnificent barrel-vaulted chamber with his collaborators David Virelles on keyboards, bassist Dezron Douglas and Jonathan Blake on drums.

Expect to hear material from Spirit Motion, Ravi Coltrane’s sixth solo album and his debut for Blue Note Records, the revered American jazz record label and home of his father’s second studio album Blue Train. The quartet will also draw upon their leader’s extensive repertoire of postbop recordings – both originals and covers and where Coltrane as been both leader and sideman – which now date from the early ‘90s in an evening that promises great style, texture and musical composition and improvisation.

The Ravi Coltrane Quartet will perform at the Howard Assembly Room, Leeds Grand Theatre on Wednesday 11th March 2015 at 7.45pm

Full details of, and tickets for this performance can be found here