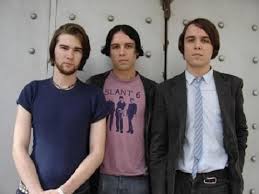 If there’s one venue fully equipped for aiding the mass pogoing that the Jarman brothers of The Cribs incite, it’s Manchester’s Ritz. Its spring loaded dance floor seems almost purpose-built for tonight’s show, and before the Wakefield trio have even arrived on stage, the floor sags and pops rhythmically beneath a throng of revellers chanting the riff to ‘Another Number’.

After a surprising support turn from The Ordinary Boys, you’d be forgiven for thinking you’d tripped and fallen back into 2005. But the Cribs aren’t ones for looking to the past, and they deliver a set peppered with cuts from upcoming sixth studio album For All My Sisters. Of course, the fan favourites are there too.  To kick things off they rip into ‘Mirror Kisses’ from 2005’s The New Fellas, but are soon teasing the audience with selected works from the new LP.

“This is the best Cribs song!” announces Ryan confidently before strumming gently into ‘Pink Snow’, a song so full of clever peaks and troughs of volume you think he may be right, and earlier in the evening the ‘woo-ooh’s of ‘Different Angle’ make their surrounding track the most instantly Cribs-like of the new material.

Although the album sounds Pinkerton’d-up to levels of homely warm fuzz, in the live setting the new songs reveal a sound texture that doesn’t massively set them apart from their older siblings. That’s not to say the power-pop leanings of the new tracks don’t standout at all, and in structural terms they certainly represent a more grounded approach to songwriting. Where in the past Ryan’s guitar parts would’ve exploded from scrappy verses into wiry choruses distinct for their repetitive riffs (see the aforementioned ‘Another Number’ – not the band’s strongest point but its instantly chant-able tune keeps it a fan favourite ten years on), tracks now ebb and flow smoothly and naturally from one part to the next as a mass of pleasant fuzz.

Melody is wrung from the same four-chords played subtly different. For fans of bands like the Cribs – especially with the scrappy punk legacy they began to carve in the mid to late-00s – acts “mellowing out” is something usually feared. It was clear even ten years ago, that when the Cribs finally did “mature”, it would be the best thing they ever did.

Ryan doesn’t bust his lip and over a decade of practise means Gary’s strained vocal lines stay relatively in tune now, but as the raucous closer of ‘City Of Bugs’ sees both Ryan and Gary hurling their instruments towards battered amps, it’s clear the Cribs still keep the chaos card tucked firmly up their sleeves. It’s hard to disagree with the tag of the UK’s “biggest cult band” on the evidence of tonight’s show.  If the West Yorkshire brothers continue to evolve at their slow, steady and consistently effective pace, we’ll be in for many more cracking records to come.

The Cribs release For All My Sisters on March 23, via Sonic Blew / Sony RED