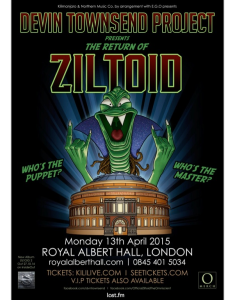 Devin Townsend usually rolls into town with a massive wall of sound, given the epic sweep of his music. But sometimes, on very special occasions, as with the Retinal Circus, he rolls into town with a full theatrical production to match. The first half of the performance this evening is a full blown musical; Andrew Lloyd Webber meets Meshuggah, with daft videos, a choir, roadies firing glove puppets into the audience with gas powered mortars, and a ball-bag shaped creature running around the Royal Albert Hall. It is wonderfully daft fun. The story concerning Ziltoid, a coffee obsessed Alien, is Pulp Sci Fi, not to be taken seriously, but it’s a fine device to hang the music on, which is by turns both beautiful and brutal. Dominique Lenore Persi joins the fray in her role as the evil ‘War Princess’, hamming it up in wonderful Pantomime fashion.

After an intermission, the cosmic trappings are put to the side and the band return for a set of ‘by request’ numbers, both fan favourites and rarely heard gems. ‘Namaste’ gets things kicking in with relentless drumming from Ryan Van Poederooyen. The set covers everything that’s great about Devin’s music, the unashamed pop influences covered in layers of heavy riffing, the glacial ambient breaks, the soaring melodies and his singing which seems capable of everything from the most delicate whisper to Opera, to full on death metal screams. At times he has to lean into it so much it looks like he’s singing from his toes. Of course in lesser hands it would all turn very ponderous and serious very quickly, but the humour and self-deprecation is never far away. Egging the audience into a ‘jazz hands’ routine during ‘Lucky Animals’ or just plain goofing about and chatting, Devin’s charisma makes the Albert Hall a much more intimate place. Almost as if we were just sitting in with the band on a session. Closing the set are 3 epic songs from the album ‘Ocean Machine’ clocking in at an impressive half hour; it’s quite the journey inside Devin’s head. Final song ‘Universal Flame’ is a fists in the air, up lifting anthem of pure joy.  As the stage is filled with fans, crew and family members, and Devin thanks the audience once again, it’s a fitting end to a one of a kind performance, (which hopefully will get a Blue Ray release at some point), and an excellent reminder of the breadth and imagination of this man’s music.