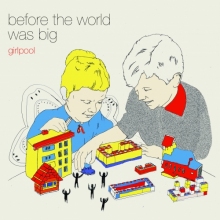 Cleo Tucker and Harmony Tividad, AKA Philadelphia duo Girlpool have it. “It” cannot be defined really, but whatever “It” is they have “It” in abundance. After self-releasing their debut EP last year, they were immediately picked up by Wichita Recordings and the EP went on to receive almost universal acclaim. Now they’re returned with their debut album Before the World Was Big.

Before the World Was Big is twenty four minutes of shrill vocals and impassioned social commentary lyrics, it’s basically Riot-Grrrl but in the setting of 2015. While this is a slightly lazy comparison, and one that band doesn’t agree with, it does fit in with the aesthetics of the band. Girlpool write honest, stark songs about sex and the inequality of gender issues, as well as growing up in the world they live in. When you break it down their sound emobides the spirit of Riot-Grrrl’s female empowerment, but with lo-fi folk leanings of the Moldy Peaches. Either way it’s an incredible album that demands to be played on loop. What is most striking about this record and the band themselves is the lack of drums. At first you don’t even realise they aren’t there, then after a few listens you find it weird that you haven’t heard any percussion. But after you’ve played the album few times you don’t really miss it and begin to wonder what the fuss is about drums anyway?

“I thought I found myself today, no one’s noticed things are ok. I took a walk down the street, found nothing beneath my feet” begin the lyrics of opening track ‘Ideal World’ , over droney guitar and bass. It’s this idea of not belonging where you are that helped the Tucker and Tividad leave LA for Philadelphia. Later they sing “Tranquillise me with your ideal world”, and this idea of leaving your home as a rite of passage to becoming an adult is a theme at the heart of the album. It’s something that a lot of us have experienced, There is anxiety about leaving home, but also there is the excitement and opening of possibilities that comes with starting a-new somewhere different. The title track sums this up perfectly “7.45 in the morning I’ve leaving my house, trying not to think of all the way this place has changed. I’ve walked around the neighbourhood, One hundred one million billion trillion times” the chorus of “I just miss how it felt standing next to you, wearing matching dresses before the world was big” hammers home this feeling of change. One moment you are going to school and the next you have to make it on your own: all the while backed by their trademark slacker guitar riffs and banshee-esque vocals.

Before the World Was Big showcases Girlpool’s ability not just to make a wonderful lo-fi cacophony, but to successful articulate the feelings of turning into an adult. Yes at times the starkness of the music and lyrical content can be a little grating, but so, least we forget, can turning into an adult.

Before The World Was Big is out June 1st 2015 on Wichita Recordings.