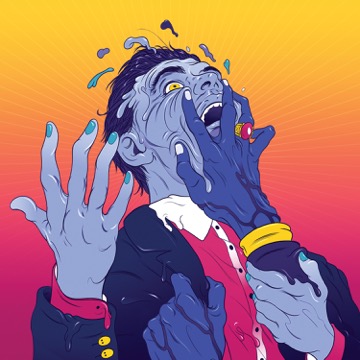 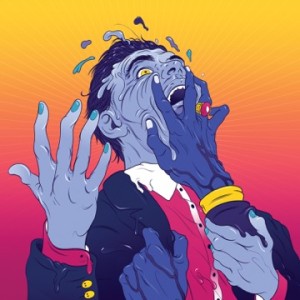 2014 was not an ordinary year for Jonathan Higgs and his Manchester art rock band Everything Everything. Observing the terrorism, killing sprees and injustice on news bulletins, it was a year that got under their skin and made them see life as a violent and cruel place on the edge of a self-inflicted armageddon. Rather than sorrow, it triggered an assertive intervening pulse and forced them to protest for the sake of humanity on a record. Although Everything Everything are no strangers to social commentary or intellectual observations expressed with wit, complex rhyming wordplay, cultural references and juxtaposition, their third album is their most confronting, controversial, political and angry lyrically. Even if the choice of musical arrangement Get To Heaven doesn’t always reflect this mood coherently.

On the stadium melancholia of ‘The Peaks’ from their second album ‘Arc’, Higgins suggests his first real dissatisfaction with life as a whole, describing it catastrophically like Michael Jackson’s ‘Earth Song’. Although he hides behind the persona of The Creator of humanity, his opinion is pretty overt, when he talks about burnt down villages, towers falling and the imbalance of horrors over dreams. Everything Everything takes that lamentation and turns it into rage on to the new album Get To Heaven, which contrasts sharply with the less judgemental and documentative approach to self importance, fake perfection and technological dominance on debut Man Alive.

The music video for the first single ‘Distant Past’ effectively recycles their technique for comparing ancient and modern civilizations- ‘Schoolin’ ‘(Man Alive) and ‘Kemosabe’ (Arc)- but is used to question the medieval preference of present day cynics. Which epoch is better? In an indecisive manner, the song’s protagonist wishes to time travel to a time without war; “take me the distance past, I want to go back”, only to realize that the daily barbaric fight for survival is a much more terrifying prospect. It has an appreciative quality of western luxuries – like on Man’s Alive’s ‘Final Form’ – although the impassiveness robotic voice samples suggest that modern life lacks raw survival emotion and points towards the computation angst of Radiohead’s ‘Fitter Happier’. ‘Regret’ envisions a futuristic cult of pixel worshippers, mesmerized by a grotesque ringleader in its promo. It’s symbolic of how the majority of the world sees the 2014 crisis of European women voluntarily joining extremist organizations. To the west it seems like a repulsive proposition but somehow it possesses persuasive qualities. The lyrics act out like an interview with a victim of this situation: “Did you imagine it a different way? Did you think everything would change?”.

Fortune 500 consumes the selfishness behind recent murder motivations- specifically Elliot Rodger’s misanthrope manifesto- and controversially narrates a fictional mission to assassinate the Queen. The repetition of “I’ve won they’ve told me I’ve won” is just striking as the subject matter for its lack of remorse and victorious videogame stance. An aggressive attitude that Higgins confesses is inspired by Kanye West’s Yeezus album, title track ‘Get To Heaven’ describes a “dark blood sky” and observes “bodies burning”, Blast Doors asks plain-clothed police officers “so close together, hard for a sniper?” and admits that he’s “going to kill a stranger” in No Reptiles.

As bleak as the subject matters sound, Everything Everything have purposely contrasted the miserable reality with a style of music that’s upbeat, danceable, euphoric and destined to be performed in arenas, with fans jumping for joy rather than pondering with gloom. Sure, that decision will increase their chances of airplay and is artistically ironic but it threatens to devalue their strongest ideas with a counterproductive mood (Regret, Distant Past) that doesn’t feel appropriate, weakening their insightful concept. The doomed future of war and technology are themes also focused upon on Muse’s Drones –released in the same month as Get To Heaven– but you can hear the destruction and aggression in their ready-for-a-fight alternative rock. Lyric scholars and critics will investigate Everything Everything’s powerful messages under a microscope but on a wilder scale, it could be misunderstood on the basis of it’s outer layer.

However, some of Everything Everything most inventive musical ideas transpire on this album. At it’s most fascinating, it’s a combination of the tropical indie rock of Foals’s Total Life Forever (‘Zero Pharoah’, ‘Get To Heaven’, ‘Blast Doors’), Radiohead’s In Rainbows, Alt J’s An Awesome Wave and M83’s soundtrack to Oblivion. The former three comparisons in particular are groundbreaking. ‘Fortune 500′ blends nervous travelling beats with baroque pop in the avant garde electronica style of Björk’s Homogenic and utilizes monarchical brass sufficiently to envision the character courageously entering the royal palace, despite the traitorous actions he beholds. It’s their best use of multiplied vocals and harmonics to create an army of choral disciples. ‘Warm Healer’ begins with effective math rock drumming in their familiar hasty personality but flows via a Future Islands bridge before levitating into blissful and spacious white-cloud euphoria- with Jonathan Higgs unusually using a deep vocoder.

Beginning like Jon Secada’s Just Another Day, Higgs whistles freely and adopts a slight Morrissey accent in the funky psychedelic indie of the title track Get To Heaven. Listeners have grown accustomed to his rapid style of singing but in No Reptiles, it breaks some world-record for speed and bends theatrically. The awkward piano keys and ambient bounce set up a crescendo-building track that’s destined to be anthemic, as it’s repeated lyrics run parallel with dreamy synthpop: “it’s alright to feel like a fat child in a pushchair old enough to run. Old enough to carry a gun.”

The problem is that many tracks have qualities that are both compelling and bland, like the frustrating ‘The Wheel (Is Turning Now)’. A disappointingly forgettable U2-esque accessible chorus is saved by the verse’s stuttering, schizophrenic, mischievous intentions and the haunting suspense of the final chapter’s gloomy keyboards and swarming electronic flies. It has a selective quality rather than being a perfectly enjoyable ride.

Get To Heaven is likely to be a grower for the original fans of Everything Everything that were charmed by their disorientated layers and unique quirks. As a whole it’s brave and entertaining but conceptually incomplete.