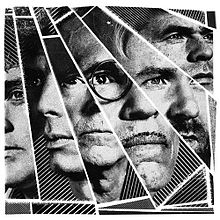 Translantic supergroup FFS’ debut album is a fantasia of characters, insecurities, balanced emotions and stories orchestrated with erudite professionalism, timeless creativity and distinctively vibrant personalities. An amalgamation of art rock, vintage piano rock, classical music, rock operas and baroque bliss. Only if Elton John, Queen, David Bowie and Andrew Lloyd Webber came together to form their own supergroup QEDA, would FFS’s eponymous debut album sound like anything else released in 2015.

Humour, the ability to surprise, snappy observations laced with a sharp wit and a sheer passion for sonic trickery are attributes that both collaborators share. Rather than being simply a rehash of either Sparks or Franz Ferdinand’s signature style: FFS have wisely invented something that demonstrates their dual mentality for reinvention – Sparks went from glam rock to dance-techno and Franz Ferdinand transformed from garage indie rock to dance punk – bold similarities and strategic approach to songwriting. They are not shamefully hiding their idiosyncrasies with pretentious denial either (you can hear Russell Mael’s eccentric falsetto, Ron Mael‘s scary piano butchering, Franz Ferdinand’s rhythmic indie drums and Alex Kapranos‘ history fascinations) but their intention to embrace their present brainstorm is unmistakable.

The irony of the epic ‘Collaborations Don’t Work’ is typical of both Franz Ferdinand and Sparks’ attempts at teasing and toying with their audience through their pseudo-sarcasm, whilst also second guessing the media’s doubtful reaction to change. It’s a good guide into their unique perfectionism, in a similar vein to how Sparks opened their neoclassical record ‘Lil’ Beethoven’ with: “Say goodbye to the beat. I am the rhythm thief.” It’s as if they were passionate about this new project, desperately wanted it to succeed but felt obliged to list all the possible side effects to challenge sod’s law. Composed with the theatrics and unpredictable segments of a rock opera, it’s comparable to the genre-travelling sonic journeys of Muse’s ‘United States of Eurasia’ or Janelle Monae’s ‘BaBopByeYa’. It’s a one way ticket through analogue folk, baroque friendliness, psychedelic space rock jazz, piano pop, dramatic classical theatre, mariachi-indie, 1990’s synth pop (sounding slightly like Sparks’ Gratuitous Sax & Senseless Violins stage), before finally terminating with a child’s first piano lesson.

FFS has an undercurrent of David Bowie’s catalogue, something that heard in the bridge of ‘Johnny Delusional’, with the other-worldly ‘Space Oddity’-like delivery of: “Paging Mr. Delusional, you’re wanted at the front desk.” The cheeky yet hesitant perception of women on ‘Johnny Delusional’ is also something shown in the past by both bands and recently on the Carry On…of ‘Police Encounters’: “I got eyes for the policeman’s wife”. Although they keep their additional crudeness at bay on this album. The protagonist of the updated glam rock ‘Johnny Delusional’ is a précis of men’s immediate yet short term fantasies and impulse to fall-in-love with pretty strangers. It displays FFS’ ability to be surreal yet relatable in their observations, even if it appeals to a male audience.

Throughout the album we get to know the residents of the FFS neighbourhood and their oddball characteristics, whilst the mood of the music is structured in a selective manner to appropriately profile the persona. There’s ‘The Man Without A Tan’;; a confident woman magnet. It’s a jealous commentary that reverses the attractive and contemporary allure of tanned skin and contributes heavily to FFS’s funny things about modern life series. It has a curious blend of momentary cello interruptions, lap steel guitar, a clappy beat and bluegrass banjo, supporting an uprising of crowd chanting. Like Franz Ferdinand’s ‘No You Girls’, the final chapter twists its narrative and solves the protagonist’s original complaint. ‘The Power Couple’ is also about the insecurities of envy but additionally how having such luxurious friends can be lucrative. It’s stage school composition, marching pace, fluttering piano, mischievous call-and-reponse duet sounds like something from a progressive rock musical. If there is such a thing.

Another member of their neighbourhood is a Japanese girl with minimal vocabulary and can only say “Sou desu ne. Ja ne” (Eng: Is that so? See you later) in the slightly misspelt ‘So Desu Ne’; which gives a slight nod towards Sparks’ Kimono My House and even mentions the traditional garment, among other Japanese stereotypes. The comical and bubbly vibe is complimented by an oriental spice added the Hot Chip indietronica beats. It’s also one of many tracks reminiscent of LCD Soundsystem’s ‘This Is Happening’ and James Murphy’s intelligent joyfulness. The subtle changes in the progression of the ignorant narcissism track ‘Look At Me’ is like LCD’s ‘One Touch’ but with English pop culture references: BBC, Channel 4 etc.

FFS don’t want to make an album that just tickles funny bones but also exercises the brain muscles; maturely dealing with philosophical and psychological issues. ‘Little Guy From The Surburbs’ is an intellectual song about existentialism and freedom in early twentieth century France, that quotes French Resistance spokesman Charles de Gaulle and references philosopher Jean-Paul Sartre. It advances Franz Ferdinand’s interest in war and historical politics. It’s contemplative nature is expressed suitably in a toned down harmonic folk song with courageous brass. So Many Bridges is about a compassionate humanitarian’s struggles with his suicidal friend and is one of their many adventurous experimentations with low frequency oscillation, as well as reintroducing their string intermissions. Whilst in the bell-ringing Save Me From Myself the narrator becomes the self loathing one.

Their oldest written song Piss Off  conveys an angry character that wants solitude and is somewhere between Bugsy Malone and a harpischord-dominated Queen. It fits inside the album’s puzzle easily, despite being conjured up 10 years ago, at the supergroup’s first interaction. Whilst the album refuses to say goodbye kindly on the finale Violent Death, by comparing the inevitable end of the album to the preparation of death. A semi-spoken word trip-hop version of Michael Nyman’s The Promise, that’s constantly haunted by a tension-filled keyboard; creeping in the shadows like the grim reaper.

FFS have mastered the art of an album that although stretching to a potentially hazardous long length, is consistently entertaining, efficiently free of irrelevant fillers and portrays an equilibrium of emotions on it’s captivating journey. Funny and thoughtfully it reinvents both bands once again. Despite Sparks already setting out the benchmark in art rock, Ron and Russell still have surprises up their sleeve.

A warning and a summary of the album’s strength is represented by the cabin crew of the White Stripes-esque Dictator’s Son: “Fasten your seat belts, we soon will land at LAX, hope to see you again.” We’ll hold the super(b) group to that promise.