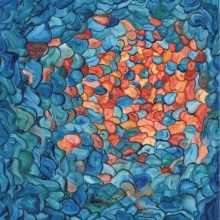 It’s 2015, just in case you hadn’t noticed. It’s well over sixty years since the first rock’n’roll record (even if we can’t agree on what it was), and a myriad of developments and reworkings have followed. What exactly have another four piece guitar band, in this case Gengahr, got to offer us that we haven’t heard a thousand times before, with evermore diminishing returns?

Well, in the case of Gengahr, ONE HELL OF A LOT. Even before the release of A Dream Outside, it was clear from the tracks available that this was most definitely not just another all male indie band rehashing old ideas from whichever decade without a single new idea between them, in a painfully obvious demonstration of what records they’ve been listening to.

First up, Felix Bushe’s voice is something special. High without sounding like a choirboy or doing an unconvincing falsetto, it’s unique and it works. And it doesn’t sound cracked. It works. And then there’s the fact that Gengahr are a clever band, but they use that cleverness well. Instead of rubbing it in your face, it’s subtle. Like the way you realise that the funniest and cleverest guy in the class wasn’t actually the one who was most in your face about it.

It’s the way that a song changes in numerous ways, yet still holds together to make a coherent actual pop song. To the extent that no matter how many times I played this album before sitting down to finally review it (at least half a dozen times, conceivably more), it became disorientating in a good way, the way a song would mess with your expectations: It’s an indie anthem! No, it’s a seventies funk workout! No it can’t be – this is a late sixties psychedelic workout!

There’s a great run from tracks two to four –‘She’s A Witch,’ Heroine’ and ‘Bathed In Light’ -which may well be the highlight of the album. Yet even if it steps back a little bit after this, it’s impressive that a band can a)work more ideas into a song than some manage over an entire career b)do it in such a way that it doesn’t comes across as punchably smug and c) develop a series of songs that flow together into an album that clocks in comfortably around the 37 minute mark.

It’s possible that not all of these songs will work on their own outside of the context of the album. And there is so much to take in (I don’t usually have the time to spend half a dozen listens on an album before writing the review) that those who only give it a casual listen won’t be giving it the attention that it fully deserves – and indeed, needs. And there’s no doubt that you can make a list of the bands that these guys have been listening to (it’s a long list, mind).

Get your hands on this album. Spend time with it and listen to it as a whole, rather than just trying a few bits for a few seconds. The reality is that you may listen to it 100 times and still be hearing something you haven’t done before. But boy, will you have fun doing so.

A Dream Outside is out now on Transgressive.