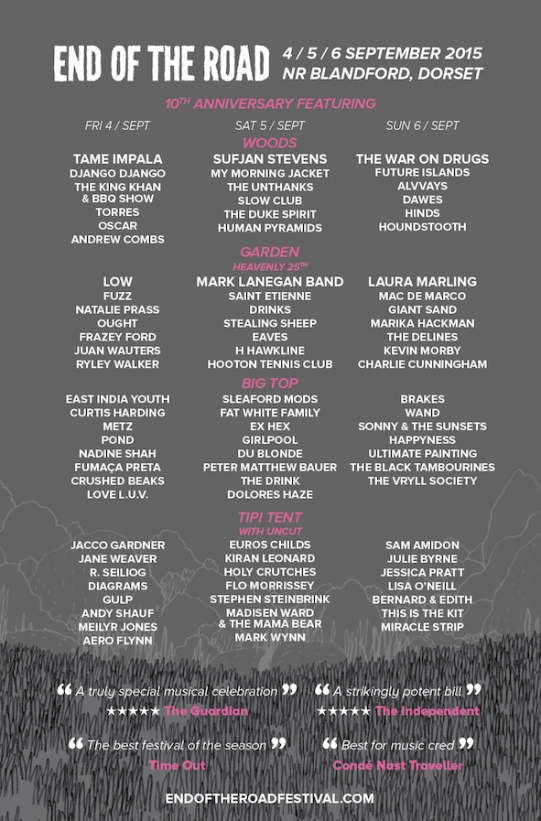 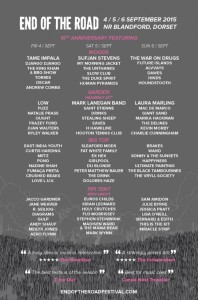 This weekend sees the Summer Solstice: the UK’s longest day, the official start of the Great British Summertime. The sun is expected to reach its northernmost point of the equator at around half past twelve this Sunday, and from then on our days start to get shorter, our hours of light fewer. Worried that summer will be over before it’s even started? Don’t be.

Our weather might be patchy, but thankfully our favourite British festivals have been consistently brilliant. One of the most impressive line-ups for 2015 is undoubtedly that of End Of The Road; we went completely gaga when they revealed their third wave of bands back in March, and today it feels like September couldn’t come sooner.

With stage-splits whizzing around the internet all morning, ticket holders can now start planning their weekend. And I’m feeling dizzy just looking at it.

Friday night will see the likes of Pond and East India Youth in the Big Top and Jane Weaver and Jacco Gardner in the Tipi Tent, while Django Django warm up the Woods Stage for Aussie psych superstars and Friday night headliners Tame Impala.

In addition to Sunday’s already-phenomenal line-up with The War On Drugs, Future Islands, Laura Marling and Mac Demarco, EOTR are pleased to announce the return of festival veterans Brakes: the Brighton four-piece will headline the Big Top ten years on from the release of their seminal debut “Give Blood” – as the festival itself celebrates its own 10th anniversary.

Other new additions to the line-up include Mammut and Peter Matthew Bauer.

With such a spectacular weekend on the horizon in September, who can blame us for wanting to fast-forward the next ten weeks? Enjoy the Solstice, and try not to wish your summer away.