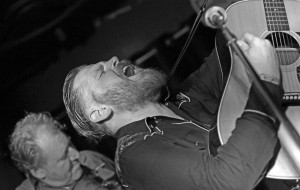 This is exactly what live music is all about; standing in the upstairs room of a city centre pub on a midweek evening, surrounded by a bunch of like-minded individuals in the most pleasantly sweaty and relaxed atmosphere and listening away to some truly fabulous sounds.

Released earlier this month, and in keeping with its four predecessors to uniformly positive reviews, the record sees Danny and the Champions of the World shift even further away from the pure Americana that lay at the very heart of Grand Drive’s sound towards something that is much more congruent with Memphis soul.

They play seven songs from the new album this evening, the undoubted highlights of which are – just as they are on the record itself – ‘Just Be Yourself’ and ‘Thinking About My Friend’. Both songs would not have been remotely out of place in Willie Mitchell’s Royal Recording Studios in South Memphis during the early 1970s heyday of Hi Records (the then home to their peerless soul singers, Al Green and Ann Peebles).

On the former, Danny Wilson’s delivery is a majestic tour-de-force. Over the most 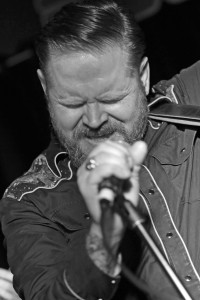 beautifully textured soul/blues backing, his voice conjures up warm memories of some of those great, late 60s British R&B shouters, Steve Marriott, Terry Reid and Rod Stewart. The latter is more reminiscent of some early 70s soul revue. Spontaneous and free it is a glorious homage to the past and the true spirit of soul music. It also features in its extended coda – and not for the first time tonight – a wonderfully joyous guitar workout courtesy of the New South Wales exile Paul Lush.

Songs from What Kind Of Love sit easily alongside the band’s older material, of which ‘Every Beat In My Heart’ (from the band’s third album Hearts and Arrows) reflects Wilson’s deep love for all things Bruce Springsteen. Here he captures some of the country influences that had begun to percolate into The Boss’s music as he moved into the 1980s – something to which Henry Senior Jnr’s excellent pedal steel attests – without losing sight of all that muscular swagger the E-Street Band could so easily convey when they were in full flight.

They sign off with their reverential nod towards Elvis Presley, ‘Colonel and the King’ (again from their 2011 release Hearts and Arrows). It is a good old-fashioned rock’n’roll stomper, performed with all of the passion and vigour of six men for whom it is clearly a great privilege and a joy just to be stood up there on that stage tonight playing for us. Their passion translates easily into the crowd on what is a very special evening of live music.

More photos from this show are here

The tour continues through June at: