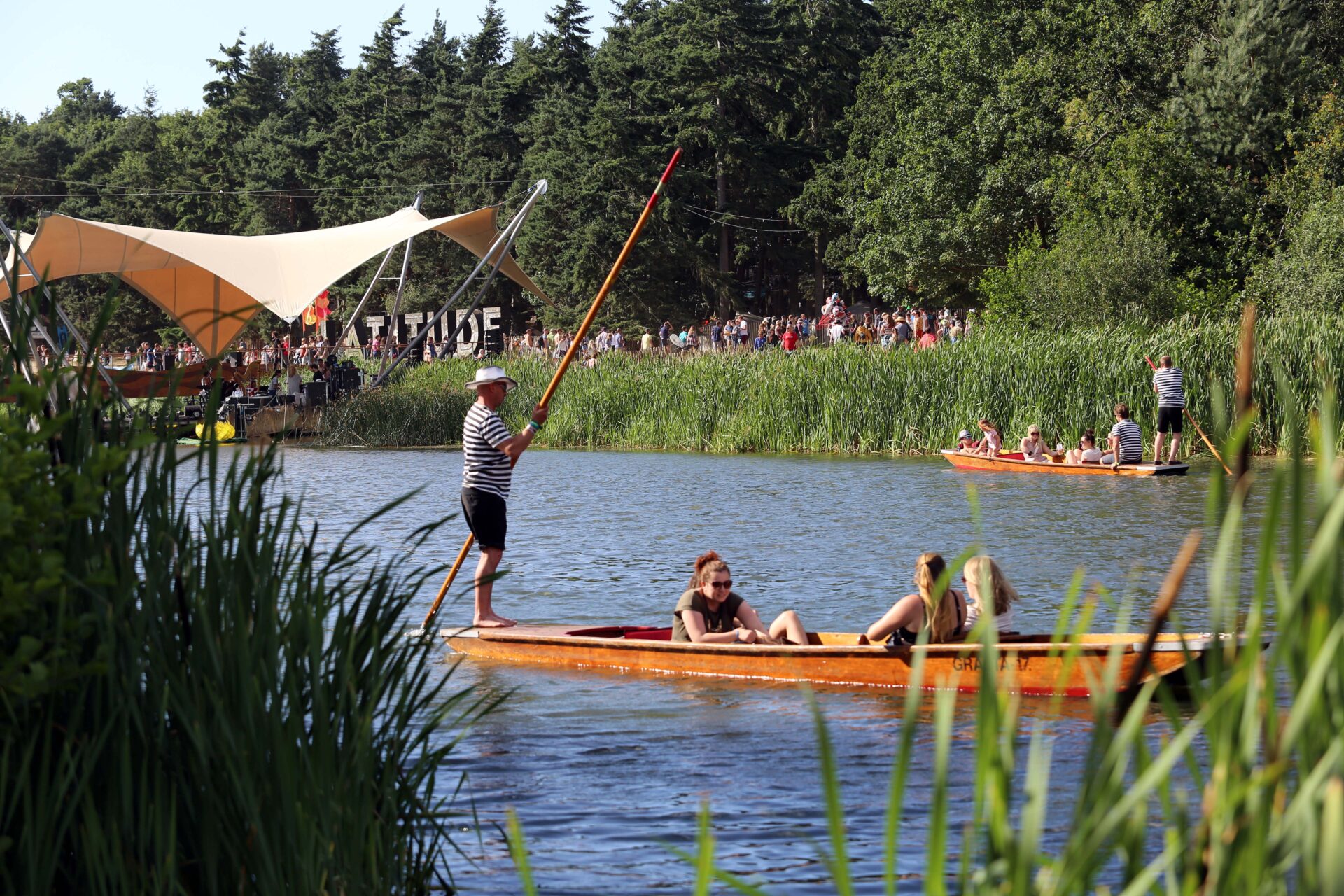 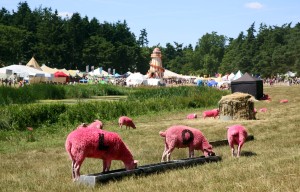 Conceived a decade ago as “the UK’s first multi-arts boutique festival”, Latitude has since seen its capacity more than double from a relatively small event in Suffolk to the point where it is now firmly established as an annual cultural landmark and one of this country’s biggest festivals.

From music, comedy, dance and literature to free gondola rides and swimming in the beautiful, ornamental lake that lies at the very heart of the idyllic Henham Park site; and from theatre, cabaret, poetry and film to the happy, vibrant children’s arena, Latitude festival really does have something for everyone. To then concentrate almost exclusively upon the music that is on offer is to forego so many of Latitude’s other myriad pleasures, but even within this narrower cultural range there is still so very much to enjoy.

As the majestic strains of Manic Street Preachers’ ‘Motorcycle Emptiness’ drift across the Suffolk countryside on Sunday evening we bid our farewells to what has been another glorious Latitude festival and take time to reflect upon the previous three days’ musical entertainment.

Earlier in the day, and still fresh in the memory, was the most improbable success of The Boomtown Rats.

He may not like Mondays but on this evidence alone Bob Geldof is pretty partial to Sundays. He may look vaguely ridiculous in his faux-snakeskin suit, but the man who is far better known for his anti-poverty campaigning and personal tragedies than for his music is a revelation. Backed by the band he formed in Dublin in 1976 and that he reunited a couple of years back for reasons of “age, curiosity and cash”, Geldof transforms the term heritage from the pejorative into something altogether more positive as The Boomtown Rats produce a barnstorming set of R&B infused glee.

Seasick Steve – who followed The Boomtown Rats onto the festival’s main stage – is another man for whom the word vintage is equally apt. Still somewhat in awe of his belated breakthrough into stardom, the veteran blues musician is a modest yet perfect embodiment of how best to live the dream. His concluding ‘Dog House Boogie’ is joyful.

Latitude does cater well for its core middle-aged audience – a criticism often, and not inaccurately levelled at the festival – but it also has its finger on a more contemporary pulse as a venture into the heart of the woods late on Friday afternoon will affirm. Here in this magical, mysterious setting lies the festival’s third main music stage and it is here where we first encounter Gengahr and then Ezra Furman. The former entranced with their blissfully frayed take on psyched-out pop while the latter proved that you do not have to have achieved veteran status to earn the right to play a wonderful amalgamation of 50’s rock’n’roll, doo wop and R&B in a little black dress.

Friday night, though, belonged to Bill Wells and Aidan Moffat. The spoken word lyrics of Moffat – the erstwhile man with the Arab Strap – are bleak, desolate reflections upon love, death and human failing. They are shot through with the darkest of humour and come wrapped in the most beautifully melodic of indie-jazz lines. Their performance here is a huge, humbling, emotional triumph.

In the Literary Arena on Saturday lunchtime celebrated novelist and screenwriter Hanif Kureishi acknowledged the influence of music on his writing, speaking passionately about how he strives to keep his imagination alive every single day. His observation about how storytelling is like a strip show – something that gradually exposes itself – could equally apply to the music of Nadine Shah. With each passing show even more of her considerable talent, confidence and class is revealed.

Listening to Sun Kil Moon you are suddenly consumed by the thought that Mark Kozelek has now filled that huge melancholic space left empty by the untimely deaths of Mark Linkous of Sparklehorse and Jason Molina of Magnolia Electric Co. During ‘Richard Ramirez Died Today of Natural Causes’ Kozelek’s voice cracks with emotional vitriol; ‘Micheline’ is agonisingly heart-rending and his reading of ‘The Weeping Song’ – a tribute to Nick Cave’s son who had tragically died earlier in the week – is as harrowing as it is respectful. But for all of the sadness that consumes his music, Mark Kozelek is not a man without humour. In an oblique reference to his recent and very public spat with that band’s frontman Adam Granduciel, he introduces back on stage Thurston Moore – who had preceded him in the 6 Music tent – as the guitarist from The War On Drugs.

Leon Bridges looks and very much sounds the part as the newest rising star of classic soul. His stylish appearance comes straight out of the mid-sixties and his music is similarly immersed in that of the great Muscle Shoals and Stax sound of that era. With a voice redolent of Sam Cooke, his appearance in the iArena on Saturday afternoon was one of effortless cool.

As Saturday evening approached and the fire was finally drawn from the day’s blazing sunshine, LoneLady decided to re-ignite the flames in The Alcove. Somewhere in Manchester, Julie Ann Campbell has clearly found the missing link that connects funk, post-punk and pop with the modern dance. ‘Groove It Out’ – from her second studio album Hinterland – is a deliriously hypnotic exercise in abandonment that stays one vital step ahead of the cultural curve.

Savages tear up the 6 Music tent shortly afterwards. Since last seen a couple of years back, Jehnny Beth has metamorphosed into a full-on metal monster of a frontwoman. She stalks the stage like some caged beast, finally breaking free during a coruscating finale of ‘Fuckers’ when she launches herself into the arms of a fervent crowd screaming out the song’s refrain of “don’t let the fuckers get you down” over a blitzkrieg of noise.

The principal focal point of Saturday night, indeed of the festival itself, was always going to be Portishead. Making a live appearance that has become almost as rare as one of their records – in a recording career that now stretches back more than twenty years they have only released three studio albums – the anticipation was understandably great.

Whether or not anxiety had been a factor – before leaving the stage, Beth Gibbons told us about how nervous they had all been beforehand – their set took some considerable time to properly come to life. During the opening onslaught of ‘Silence’ and ‘Nylon Smile’, and helplessly submerged under a huge welter of industrial noise, Gibbons’ voice was drowning. It was a claustrophobic feeling of cold, stark emotional detachment and one through which the light did not begin to shine until the band reached ‘Over’. From that point, though, Portishead moved into another dimension of experience, creating a hypnotic avalanche of what is still the most compelling and beautifully textured sound that is around today.

Thom Yorke joined them on stage for their initial encore, ‘The Rip’, before heading off into the woods to play what was by all accounts a typically wilful and obtuse “secret” gig. The previous evening and with a much greater emphasis on crowd-pleasing, the local-boy-done-good Ed Sheeran had performed a similar show.

Bob Geldof referred to Latitude as “the middle class festival” and there is really no getting away from this description. Located in the most elegant of surroundings, it is an event that is imbued with refinement and does occasionally wear a slightly smug smile of self-satisfaction on its cultivated face. But for all that Latitude is capable of surprises, as the Thom Yorke and Ed Sheeran shows firmly attest. It also offers a breathtakingly wide-range of music and non-musical activities – the extent of which is not seen anywhere in this country outside of Glastonbury – in a warm, friendly and uplifting environment.

More photos from Latitude 2015 can be found here