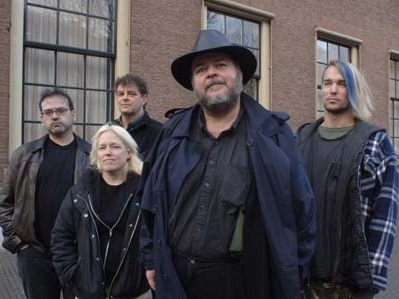 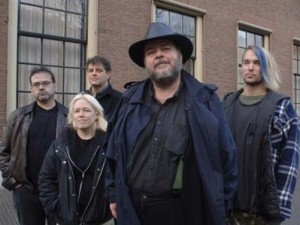 Pere Ubu fix things. That’s what they do, and after 40 years in the Avant-Garde music business it’s a handy skill to have. During the sound check this skill was definitely needed! After a limited practice the night before, due to unforeseen circumstances, the band had just an hour to prepare for the Brighton gig. Even in a weakened state Thomas was still an imposing figure and is a classic band leader in the Sun Ra vein. He’s handpicked the best musicians he can find to translate what he hears in his head. If they play anything that he deems to be below his standards they know about it. After running through a few tracks a couple of times, a lot of expletive laden sentences and long consultations with the sound guy, Thomas and Ubu were happy with things, well maybe not happy but satisfied that everything would run smoothly. In contrast, the support act’s sound check was plain sailing. Two tracks played in rapid succession and they were done.

After the fractious but entertaining sound check, the general public was admitted and the night got underway. The support slot was filled by West London’s finest travelling minstrels Du Bellows. Channelling the spirit of Ealing’s rich musical tapestry and adding their own contemporary take on folk rock, with the emphasis on rock, they won the crowd over with their tales of love, rejection and ultimately redemption. ‘Silurian Woman’ gave subtle hints at what was to come. And when they performed ‘Spin‘ and final track ‘Luminaire‘ the crowd clearly wanted more. It’s been a rough few weeks for Du Bellows too, but they’ve weathered the storm and emerged safely on the other side. There have been causalities, but these things happen when bands outgrow their roots, but due to this they are tighter and hungrier than ever to prove their detractors wrong. In singer Jade Williams, they have a voice that is steeped in musical folklore, but also isn’t afraid to go off piste when needed. Special mention should be given to the engine behind her that throbs, pulsates and drives their songs forward.

Pere Ubu took the stage after a short break. As the lights hit their faces, you knew they meant business. This wasn’t going to be a leisurely stroll through an immense back catalogue, but a turf war against the torpidity of contemporary rock! Opening with ‘The Long Walk Home’ from 1982’s Song of the Bailing Man, Thomas and co launched into it with everything they had. ‘333‘ followed with the same gusto. The primal nature of the rhythm section was stripped back even more than the original; Proto Ubu seemed a more fitting name. The next four tracks, The Carnival of Soul Suite,- ‘Bus Station’, ‘Carnival’, ‘Nevada’ and ‘Road to Utah’ – rattled by. ‘The Vulgar Boatman Bird’ sounded more psychotic than ever, this off kilter vibe couldn’t derail the enjoyment from the crowd that this old favourite was having new life breathed back into it. The remaining songs were played at breakneck speed, and deciphering their codes and melodies was nigh on impossible, due to the intensity of playing and Gagarin’s wall of feedback and glitches. Things slowed down with ‘Winter in the Firelands’, and the crowd erupted in applause. After a quick game of cat and mouse they were back on for the encore ‘Irene’, Ubu’s most touching and emotionally charged song of the set. As the band shuffled off the stage for a second time, they had nothing left to give. Thomas had exorcised his demons, for another night at least, and looked like the triumphant victor as he left the stage with his rag tag band of musical warriors.

The transformation between Thomas during the sound check and as he strode off stage was nothing short of miraculous. So I guess that their motto is correct. Pere Ubu fix things. That’s what they do.