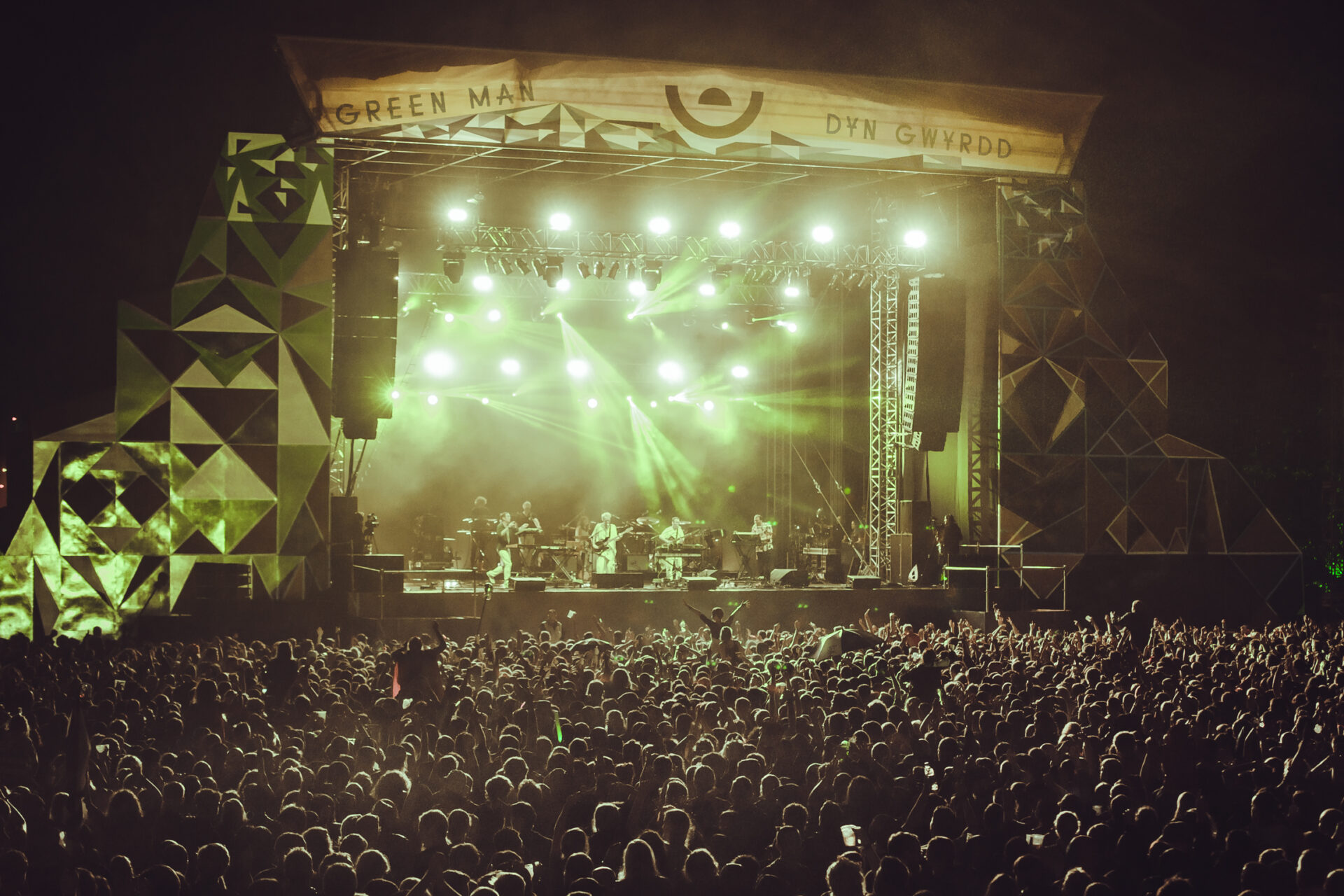 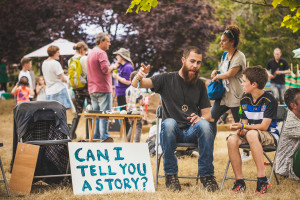 Located deep within the Welsh countryside in the valley of Glanusk Park, Green Man Festival is a reminder of what a festival can be when creating a diverse smart line up and caring for audiences takes precedence over profit. Attracting fans from across the continent, even the persistent rain fails to kill its happy warm vibes, making it one of the friendliest events and most elegant line ups this summer.

Arriving to relatively clear skies on Thursday, there is just enough time to set the tent up and pop by the extraordinary real ale and cider bar before we’re off to see Leftfield. Although there is minimal material from their seminal LP Leftism, the set is forceful, taut and thrillingly energetic as original ravers and new kids come together in a packed Far Out tent. Meanwhile, over at Chai Wallahs, Manchester production team The Mouse Outfit are blasting out funky hip hop tracks at the excited early arrivals.

Friday morning is packed with entertaining science exhibitions in Einstein’s Garden and checking out the colourful Hooping Harlots performing with their glittery hula-hoop tricks before it’s time to see the magnificent Natalie Prass on the Mountain stage. With ripples of her self-titled debut still spreading out around the world, her set is expertly and beautifully crafted folk, pop, country and emotional torch songs rolled into one. She seems genuinely thrilled to see people getting the record; and when the sun comes out to greet her, the crowd erupts in a huge round of applause. Back in the Far Out tent Hookworms, one of the best live bands currently on the scene, pretty much strip the roof off the place. Pummelling waves of sound and feedback whip up intensity and fervour that assails like a tidal wave.

Sun Ra knew a thing or two about the importance of live spectacles and so he’d have appreciated Hookworms, as his continuing Sun Ra Arkestra present a joyful and jazzy legacy with a spaced-out, funked-up show to follow the Yorkshire noisenik psych merchants. Then comes another psychedelic vision in the form of Temples. If not particularly original, they represent a melodic, enjoyable and brilliantly distilled psychedelic wormhole leading us back to the 60s.

Sadly, Friday night brings the first clash of the weekend: it’s sumptuous Mew Vs delicious Hot Chip. After much deliberating, Hot Chip win our vote, rewarding us with a tremendous shimmering display of how to beautifully meld dance and pop to gloriously unifying effect. The fact that the once omnipresent albatross of ’Over and Over’ is now only one of their great tracks is a tribute to their continued development, and a superb blended cover of Bruce Springsteen’s ‘Dancing in the Dark’ and LCD Soundsystem’s ‘All My Friends’ is a magnificent way to finish. But it’s not quite over as we head back to the Far Out tent to watch The 2 Bears and Hot Chip DJs ending spectacular Friday proceedings.

Our Saturday starts in the picturesque Walled Garden with Vök, a swirling funnel of electronica and guitars stirring the sun-bathed slumbering garden into action. Named for its place at the foot of a misty mountain, the Mountain stage plays host to The Leisure Society who remind us what beautiful songcrafters they are. By now rumours of Bat for Lashes playing a secret set in the Far Out tent are gathering pace. And they prove to be not entirely false. Yes, Natasha Khan is there but she’s playing as her new outfit Sexwitch with none other than TOY and legendary producer Dan Carey. The result more than makes up for any confusion with a combination of Eastern vocals, rhythms and a screen of heavy psych and electronica that sits together surprisingly well. Television playing Marquee Moon in full should be a home banker. And it still is but somehow it feels like you’re always waiting for the final piece of the jigsaw that never arrives. True, hearing ‘See No Evil’, ‘Friction’ and ‘Marquee Moon’ ringing out across the fields is never going to disappoint but the whole arena seems slightly too big for such a record of contained and coiled energy; and the band’s (laudable) decision not to play it in order from start to finish loses the perfect, seamless flow that characterises the work. It’s still a joy to watch, but not the utter highlight that was anticipated beforehand. Super Furry Animals, however, are stunning. Missing out on the apparently magnificent Slowdive set is compensated by the almost tangible sense of communal homecoming. Mixing classics with the fascinating electronica of Mwng, it’s a lesson in how to flawlessly demonstrate your back catalogue while remaining unpredictable and engaging. Somewhat more predictable is the irony of a rain deluge starting during ‘Hello Sunshine’ which continues unabated throughout the set, but we all stay, joyously wrapped up in this magnificent band. They end with a 15 minute ‘The Man Don’t Give a Fuck’ and though you imagine much of this is yelled at the rain ahead, it’s a glorious experience.

Rain sweeps through the valley of Green Man and Sunday morning brings more torrential downpours, but when it finally breaks the skies quickly turn a beautiful blue. Matthew E. White is a delightfully oddball and engaging presence on stage and his closing ‘Rock and Roll is Cold’ brings everyone to their feet for a singalong. Whether there is much of a singalong during The Antlers set is questionable, but they remain a band utterly unconcerned by playing in unfamiliar situations – relaxed, tight and still perfect at delivering beautiful shades of emotional colour. And it is my eyes that are watering rather than the sky during devastating closer ‘Putting the Dog to Sleep’. Simply magnificent.

As much fun as Public Service Broadcasting‘s The Race for Space is, the impact at the Far Out stage is somewhat lost given that you cannot get anywhere near the tent from 15 minutes beforehand. PSB’s brass-infused space expedition is followed by Courtney Barnett, whose performance is a reminder of why for many she’s been the breakthrough success of 2015. The tent is absolutely fizzing and she seems utterly delighted (though in that laconic style of hers) to be here. Her band are wonderfully tight and ramshackle in equal measures. ‘Depreston’ and ‘Nobody Really Cares If You Don’t Go To The Party’ already sound like modern classics and the whole place lifts off when she ends with ‘Pedestrian at Best’.

And so it’s finally left to St Vincent to bring Green Man 2015 to a close. And, dear Lord, she smashes it out of the Glanusk park. From the opening ‘Birth in Reverse’ to the closing ‘Your Lips are Red’, you realise you are listening to an artist in utter control of her music, her direction and her playing. The likes of ‘Cruel’ and ‘Digital Witness’ shimmer like diamonds, and the robotic crunch of the guitar on the likes of ‘Marrow’ makes it sound like they’ve been transported from another planet. Much needs to be said for Annie Clark’s band who are superbly drilled and deliciously funky. It’s that rarest of things – a headline performance that manages to be both musically daring and gloriously enjoyable; and in that sense it’s the perfect way to end a magnificent weekend.

Through musical diversity beyond any genre or gender bias, young and old coming together, a commitment to providing a wonderful time for all and a complete and utter lack of any aggression, negativity or superior attitude, Green Man has stepped up to the big league and proven itself as one of the finest festivals not just in the UK but in Europe. To have many more people at Glanusk Park in 2016 would damage its beautiful festival ecosystem, though you can’t help but feel that so many people are missing out by not coming here. A simply glorious weekend of music, joy and living life to the full, even if we are all struggling to return back to reality now.