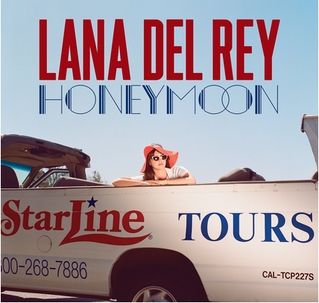 Four years ago, after the initial burst of hype for Lana Del Rey’s release ‘Video Games’, came one of the biggest backlashes in music in recent years. Pretty much everything about Lana was attacked or discussed to death. When Born To Die (the album) came out, many thought it didn’t live up to the promise of ‘Video Games’ and were disappointed that she wasn’t the dark and authentic songwriter they had hoped for. Last year’s Ultraviolence had about a quarter of Born To Die’s sales, but got stronger reviews and even regained some of the fans she lost in the backlash. Just over a year later, she’s back with Honeymoon, making her one of the most prolific high profile artists around. Lana has released three albums, one EP and various one-off songs for soundtracks in the last four years.

Ultraviolence’s lower record sales could be blamed on a lack of commercial material. ‘West Coast’ was a surprising lead single, but it made sense compared to the rest of the album which was even less radio friendly. It’s a similar situation with ‘High By The Beach’, the lead single from Honeymoon. The chorus is memorable, and the woozy, eerie atmosphere doesn’t sound like a radio hit — nothing else on Honeymoon does either. Lana has always had a way with a middle eight (‘Ultraviolence’, ‘Ride’ and ‘Sad Girl’), and ‘High By The Beach’s’, “Lights, camera, acción” is one of the best moments on this record.

Just like Ultraviolence, Honeymoon begins with an epic opening track. Lana’s vocals take centre stage in the title track, backed with gorgeous orchestral flourishes. Lana’s opening line, “We both know that it’s not fashionable to love me”, shows self-awareness and a sense of humour (last year’s ‘Brooklyn Baby’ had the same). Lana is often accused of being miserable, but some lyrics are tongue in cheek.

After a mellow opener, the album remains low key with, ‘Music To Watch Boys To’. The subtle strings and flute maintain the cinematic atmosphere. ‘Terrence Loves You’ is a sparse and stunning torch song. Lana’s voice has never sounded better when she sings “I lost myself when I lost you, but I still got jazz when I got the blues”, which is all accompanied by a sad sounding saxophone. It’s delicate, haunting and by far the highlight of Honeymoon. The hazy mood of these first three songs is reminiscent of Julee Cruise’s brilliant Floating into the Night album. I can imagine Lana singing in the club scenes on Twin Peaks.

After a strong start, Honeymoon starts to drag in its middle section. ‘Freak’ is a great song (with another incredible middle eight), but during the transition into ‘Art Deco’ the album starts to feel one paced and monochromatic. Songs like ‘Art Deco’ and ‘Religion’ have atmosphere — unfortunately the songwriting doesn’t feel strong enough to let these songs have any lasting impression.

Things pick up towards the end of Honeymoon. ‘The Darkest Day’ is perhaps the summation of Lana’s vision for it. “Ever since my baby went away, it’s been the darkest day since my baby went away”, Lana sings hopelessly in the chorus (which has a striking melody).  The song ‘24’, like last year’s ‘Shades Of Cool’, sounds like Lana auditioning to sing a Bond theme (at this point maybe she’s just showing the producers what they’re missing after the recent Sam Smith announcement). The way Lana delivers the final lines, “You’re hard to reach, you’re cold to touch”, is exciting, and it also highlights how lifeless some of the other songs were.

Just like Ultraviolence, Honeymoon has a perfect song to close the record as its penultimate track. Ultraviolence had the stunning ‘Old Money’, but instead ended with her version of Nina Simone’s ‘The Other Woman’. Honeymoon has a well-suited closer in, ‘Swan Song’ but instead it ends with another ill-fitting cover, ‘Don’t Let Me Be Misunderstood’. Thematically it works, but musically it spoils the mood set by the previous few songs.

Early reports that this record would be a return to the more commercial sound of Born To Die are way off. If anything, Honeymoon is even darker than Ultraviolence. Anyone who thought her previous work was overproduced (a common criticism of Born To Die) will be pleased with Honeymoon. It’s admirable that Lana is trying to make an artistic statement and seems happier repositioning herself as a cult artist. It’s almost as if she’s spent these last two records trying to recapture the mysterious aesthetic she had on ‘Video Games’. It feels like becoming a big star wasn’t part of her plan. She sounds completely in control and in her own world on Honeymoon, something that’s become increasingly more apparent with each of her releases.

Honeymoon is a good album, but after the perfect noir pop of Born To Die and the bleak beauty of Ultraviolence, it’s a slight disappointment. It doesn’t stand out enough from her previous work and that makes it frustrating to listen to. Goldfrapp’s 2013 album Tales of Us was a more successful attempt at this kind of dark and stripped-back record, because every note mattered. The best songs here show Lana has become a great and unique artist, but overall ‘Honeymoon’ is hard work and is too long. On ‘Swan Song’ Lana teases, “I will never sing again”. I hope that’s not the case because she’s capable of so much more.