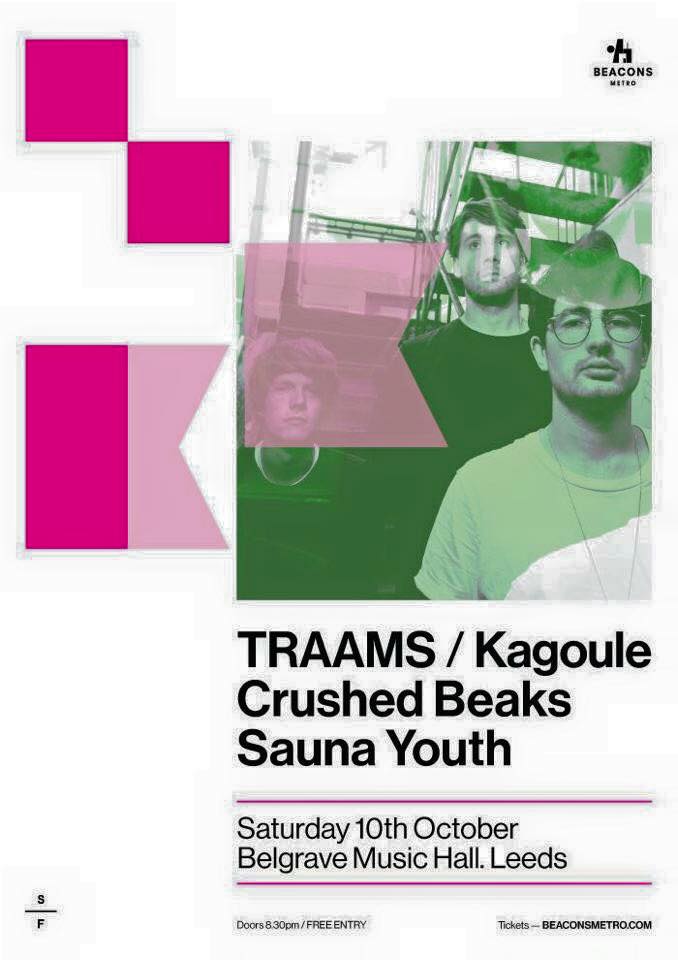 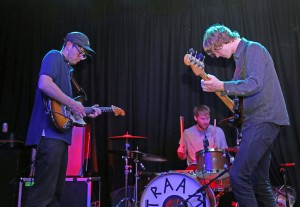 Beacons Metro is quickly gathering momentum. Having emerged from the ashes of the sadly lamented Beacons Festival, this brand new metropolitan festival is now well into its second week as it brings to various venues across Leeds city centre a wonderful series of music, art and food events.

More than 30 other such events are scheduled between now and the middle of December; tonight it is the turn of TRAAMS to headline at the city’s Belgrave Music Hall. A full supporting card is provided courtesy of Sauna Youth, Crushed Beaks and Nottingham’s Kagoule – each of whom put in edgy, strident and spirited shifts that are in firm keeping with the forward-thinking ethos of the Beacons brand and its strong commitment to bringing exciting new music to this part of West Yorkshire and beyond.

Speaking before the show to Leigh Padley – TRAAMS’ most personable bass guitarist – he tells me of the band’s debt of gratitude to Beacons for having put them on at their festivals in both 2013 and 2014, the first of which, and due to a last minute cancellation, had seen them dramatically elevated up the bill on the festival’s second stage. He felt that these appearances served to greatly raise TRAAMS’ profile and when the offer came for them to appear here tonight, and despite the 550-mile round trip from their West Sussex homes this would entail, the band had absolutely no hesitation in accepting the offer.

Formed in 2011, TRAAMS will release their second album, Modern Dancing next month. Produced by Hookworms’ frontman MJ – who is in attendance here tonight with some of his fellow bandmates – and if the three songs that have been dropped thus far are anything to go by, it would appear to have come from a much lighter place. Where its predecessor Grin is shrouded in darkness, fear and claustrophobia, the early indications are that Modern Dancing is a far more positive, much less opaque recording.

Yet to think that the TRAAMS’ sound has suddenly become much softer around the edges is to be seriously wide of the mark. They still trade in the harder currencies of repetition, taut angular rhythm and rapid change energy. And their heritage still remains one that can be traced back through Pavement, Wire, Television, Talking Heads, and Neu! all the way to Iggy and the Stooges.

The first few songs this evening, though, must first travel through a rough mix in 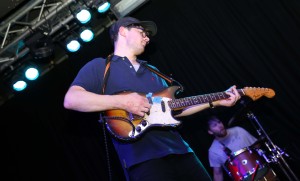 which Stu Hopkins’ guitar and vocals are almost posted missing at one point. New songs ‘Costner’ and the magnificently entitled ‘Succulent Thunder Anthem’ nearly get lost in this sonic fog but somehow manage to find their way onto the other side through their sheer obduracy and determination. However, a change of guitar lead before ‘Sister’ – another song from the new album – signals a marked shift upwards in gear and dynamic. ‘Sister’ fairly motors ahead, crackling with an intent that spills right into the ensuing ‘Silver Lining’, both songs serving as remarkable advertisements for the forthcoming album.

TRAAMS then set glorious sail for home. Powered along by the driving rhythmic pulse of Padley’s fluid bass lines and Adam Stock’s metronomic drumming, Hopkins’ guitar is then able to walk a tightrope between controlled aggression, precision and an apparent urge for reckless abandon. ‘Klaus’ – a colossal, hulking beast of a song that just seems to get bigger, better and more relentless with every single hearing – then ends what has been a really great evening of music in a suitable squall of ear-shredding feedback.

More pictures of the TRAAMS’ show can be found here

Information on Beacons Metro, including details of all their forthcoming events and how to buy tickets for them, can be found here