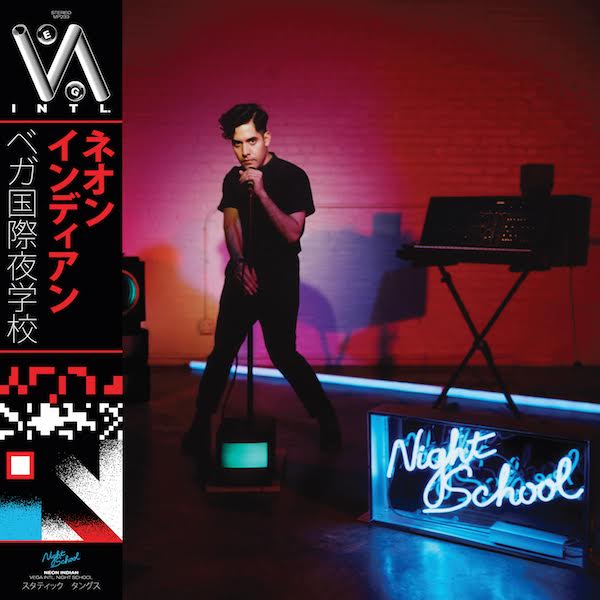 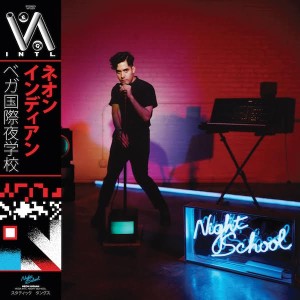 “Most of what I’ve learned about human nature in my twenties has happened after dark,” confesses Alan Palomo, the Mexican-born musician behind synth-curvature project Neon Indian. After his laptop was stolen in 2012 during the intoxicated nocturnal hours in New York City – and subsequently losing an album’s worth of demos- Palomo self-taught himself a harsh lesson about how to behave during twilight. Instead of pushing him away from the scene, it just made him a little wiser. His re-drafted third album invites us to enrol and learn more about his guide to social survival at his academic night school – open 24/7 aided by a hotline number, if the concept-driven spin-off website www.nightschool.biz is to believed.

Signing up to the classes, will reward students with experienced observations from the 27-year-old’s journey. ‘Slumlord’ examines the burdens and fragilities of rent-paying and how his spirited opportunism provided his “four walls and keys”, and in a way this mentality gave birth to the project with apologetic song ‘Should Have Taken Acid…’ from his debut Psychic Chasms.

‘Street Level’ cautions about narcotics calling them “pesticides” as the narrator tries to survive the night. Bouncy ‘Annie’ is a lesson in perseverance, as Palomo heroically searches for a missing girl – which is a far cry from the lazy, bedroom-wallowing and sympathy-wishing lyrics on break-up album Era Extrana. Although, it’s hard to resist placing the Michael Jackson question “Annie are you ok?” inside its context.

Whilst attempting to be educational in its content, delivery is akin to National Lampoon’s Animal House if it a had subtle warning stickers on all the fraternity rooms; a collection of enjoyable lectures that imagine social parties on a balcony-laden apartment block that are fun and hedonistic but will abide by neighbourhood courtesy. Neon Indian have adjusted their musical priorities, putting emphasis on movement-inducing anthems that inhabit the alternative dance-orientation of his seemingly extinct project Vega, hence the album title and lyrics such as “move your body” from ‘The Glitzy Hive’.

Fortunately the funky disco environment doesn’t sacrifice the creativity of Palomo’s chillwave synthesizer invention or the lo-fi playfulness and doesn’t distract from nostalgic detours into classic Eric Clapton-rock territory such as on ‘Dear Skorpio Magazine’ – whiche visualizes the rolling credits to an 80s action film starring Arnold Schwarzenegger. Neon Indian is also welcomingly more digestible, memorable and approachable due to the clarity of Palomo’s voice – no longer shoegazing in thick fog – instead pendulum-swinging between the R&B vocals of Jermaine Stewart and Bobby Brown in addition to Blood Orange (notably Dev Hynes also made intriguing commentaries about nightlife on Cupid Deluxe).

But fear not, many of Neon Indian’s idiosyncrasies remain on his third album including his preference for interludes – pointing towards his background in film-studying and preliminary interest in scoring the media – and use of voice samples. In Vega Intl. Night School, the speech sound bites are used effectively to portray a social environment in the vain of Erlend Øye’s Every Party Has A Winner…; girls laughing, incomprehensible chit-chatting, crowd-noises and a Hispanic man declaring this a “la discoteca” contribute to this album’s overall Friday night feeling.