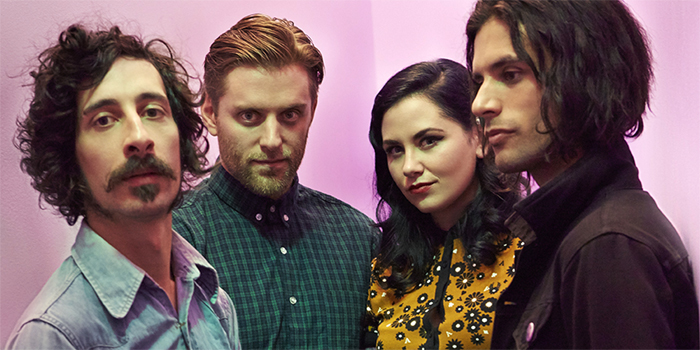 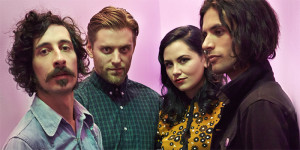 Eschewing editorial advice to have one’s teeth pulled out with pliers we roll up tonight on the back of some rather tasty root canal work but hours before. As riders go it sure beats three bottles of Babycham and 20 fags.

Two seconds into the raucous rock supplied by Bristol four-piece Turbowolf and the jolly wisdom of that plan looks decidedly suspect. Even solidly extant dentistry is in danger faced with the rattling cacophony from onstage; the newly revamped molar vibrates alarmingly. Indeed, all parts of the venue and crowd throb along. Checking the jangle from my phone to see if it’s an urgent call from the dentist asking what the Hell I’m playing at, it turns out it’s dead as a doornail and is simply fizzing along to the decibels.  A physical experience, in other words. And that’s true even if you manage to dodge lead singer Chris Georgiadis launching himself off the speaker stacks onto the mob below. It ain’t subtle… But bugger me, it works.

Crashing on with an emaciated thrust, the band look like they’ve been on tour for 12 months and probably died somewhere around mid-July. The sort of look that says, “We only exist on stage.” This is never, ever a bad thing and there’s a jolt and excitement from the get-go.

It ain’t hugely original, but the crowd go mental, the band go mental-er and it’s really hard to argue with drums, bass, guitar, vocals and a roundly abused keyboard being battered into submission so emphatically. Rocktastic, groovy as hell, and heavy as you like.

Touchstones would be early 70s hairy goings on and Led Zeppelin type swing. Not with the daft pixies and such like, but the simple, primal mayhem. Bassist Lianna Lee Davies is a marauding beast; guitarist Andy Ghosh is, true to the job description, a wasted sex-machine, and Blake Davies beats seven shades out of the kit at the back. All the while our sequin jacket-sporting front man stalks around; a quite frighteningly intense ball of energy at times. Lyrics are barked out and a body (his) is tossed into the stalls with reasonable regularity. The assembled acolytes return the favour by taking to the stage with gay abandon.

Which seems entirely apt, that kinda vibe – adoring fans in the basement sweat pit. Indeed adoring each other at one point when a circle is formed and one young fellow is entreated to enter – to be fondled by the surrounding throng; a seeming ritual for Turbowolf gigs going by the gusto with which all parties enter the fray.

And that illustrates the funny thing about the band. They may be steeped in on the road degradation, but they are very friendly and indeed very, very polite. Disarmingly so, actually. Quintessentially English during inter-song repartee, it borders on the camp. They look like they’d abscond with your guinea pig to form a sex-colony on Mars but they’d send an apologetic letter afterwards. Glasgow, it was really nothing.

They’re lovely people, but also spirited, crushingly loud and capable of shoving a good time racket straight down your ears. It’s like Iggy Pop had dear Mr and Mrs Pop sent their wayward son to finishing school.  Having been likened to Royal Blood by a sister in arms, Turbowolf lack the calculation and cynically disguised polish of that outfit. That’s not to say there’s no craft, skill and sophistication – the enthusiastically molested electronics bear testimony to that – but, above all, it’s simply thrilling. And to say that through a fog of horse-strength, dental anaesthetics from earlier in the day is testimony to some kind of frothing vigour.

Turbowolf are in no way avant-garde, but box office and pretty irresistible – really irresistible, in fact.  Their latest album, Two Hands, was released this year on Spinefarm Records is a lively affair.  ‘Solid Gold‘ is particularly excellent tonight and the video features snakes and a flaming truck [of course] – but this foursome need to be seen and heard in all their wasted glory.