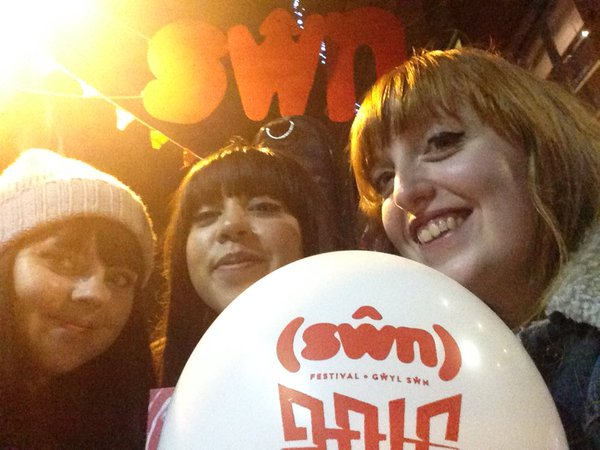 Having slimmed down to just an all day event in 2014, this year Swn is spread across a weekend and more central venues in Cardiff; so Swn has also stripped away many of the ‘name’ attractions, focusing instead on local and emerging talent from Cardiff, Wales and beyond. Probably burnt by overstretching themselves in years past, there is a sense of cutting the festival back and keeping costs down whilst still trying to retain what makes Swn special – the music and the attention it draws to the Cardiff music scene each year. As Swn head honcho John Rostron puts it “We’re keeping it small, so we can be fleet of foot, which we hope everyone recognises and enjoys in the acts we’ve booked.”

This year, save for the last minute addition of Everything Everything and Stealing Sheep in the University Grand Hall on the Saturday (full review to come) and The GO! Team at Clwb, there are very few ‘name’ bands to be seen. We get the upcoming likes of melodic guitar-pop duo Tuff Love, London/Swedish sound explorers FEWS, prolific Bristolian indie pop from Trust Fund accompanied by a range of some of the most exciting new Welsh talent around including Beach Fatigue, Tender Prey, My Name Is Ian, Baby Brave, so we have to applaud elements of the discovery credentials of the schedule. But we also get a grab of names even we haven’t heard of, and this is the issue with this year’s edition of Swn – potted quality playing to busy full houses in venues like Clwb, Abacus and Buffalo Bar. Surrounded by tumbleweed and a lack of excitement, even the locals may struggle to recognise some local acts in other venues. It also feels a bit stuck in rock genre this year: there’s a lack of hip hop and dance music representation, save for the Jungle DJ set, or little recognition of the burgeoning electronic scene?

On Saturday afternoon, among the crowd we catch a glimpse of the excitement that follows the funk and hip hop mash up of Afro Cluster, playing downstairs in Clwb Ifor Bach (The Welsh Club). Lurching bleary-eyed into 10 Feet tall, we find some horrendously messy noise-punk being pushed out by Arms Like Legs.

Back at Clwb Ifor Bach, Seafret are conjuring up the kind of sound that apes the earnestness and stand up drumming of mid-period Coldplay and anthemic swell of early Kings of Leon, with a singer who looks like Art Garfunkel. So far – not very impressive. Downstairs to the Horizons stage, a very worthy scheme shining a spotlight on local artists and helping them make their way through that troubling phase between unsigned/DIY band and beloved mid-carder. Here we find a stripped back Peasant’s King, a valleys band whose brand of polished folk-tinged rock is very well constructed; there’s a heart-on-the-sleeve anthemic quality from their singer. Even though he admits to feeling quite rough, he puts on a good show. Songs, such as their swelling single ‘Kingdom’, go down well with a home-town crowd. But the feeling lingers that Peasant’s King are a little too safe, a little too polished, a little too well middle of the road, which could be a strength if you want to appear on R1 one day.  It’s easy to dismiss their retro brand of rock as dull and dated, and brand them as mere Pearl Jam throwbacks, but we shall see. Green shoots are there and Horizons are clearly here to nourish those shoots.

Moving onto Four Bars at Dempseys, we catch Remembering August – a Cardiff duo playing pristine girl/boy Americana harmonies over gentle guitar plucking and keyboard dabbing. The problem, however, is its sleep inducing quality. Pitching for Bob Harris’s Country Show playlist on R2 might be a worthy aim, but it leaves us wondering why are some young people inspired by such boring music? When they start singing about ‘gasoline’ it’s time to move on. When we return North Walian band Baby Brave are on stage. This beat combo are a joy to behold: all artful, sinewy, post-punk rhythms and insistent vocals from elegant front lady Emmi. Tracks like the giddy ‘Jitters’ enliven the night, while the tremulous guitars of new cut ‘Traxx’ lurch between Francophile melodic sweetness and almost Patti Smith-like stream of consciousness heartbreak. With a wounded, glamorously pointed sound, Baby Brave definitely restore our faith for a while!

Back in Clwb, on the Horizons stage, HMS Morris are playing.  They’re one of the more interesting emerging local acts of the weekend. Their glacial sound is all lilting, beguiling melodies, lush sample sweeps and Kraut rhythms, but the eye is taken by their aerobics costumes and the dancing girls doing exercises on stage! All together now…

There’s a crowd forming for The Go! Team who are delivering their gleeful cut-and-paste party sound, but we can’t get in so we turn our attentions to Chichester three-piece TRAAMS at the Abacus. Aided by the brilliant clarity of their PA, their sound pours forth relentlessly – an incendiary jagged motorik assault on the senses that leaves our ears ringing as we filter outside into the night air.

Sunday is a slow start making it into Clwb just in time for Chester girl three-piece Peaness (say it quick for proper school-boy chuckles). They are playing to a packed crowd. Their brand of tuneful garage rock is laced with attitude, irony and riffs, and a side order of politics. If I was to throw around comparisons I would offer the gang mentality and riffs of Elastica and the smarts of mid-period Lush, finishing with an anti-love song about George Osbourne, they are clearly kindred spirits. Raw around the edges but bloody enjoyable. For their sixth gig, this is a fine introduction. We hot-foot over to Four Bars. Cristobal and The Sea are playing a sound that is the meeting point between the pastoral melodies of early Fleetwood Mac and the jangle of Vampire Weekend, but not nearly as good as that sounds, to about 20 people.

Back upstairs in Clwb Ifor Bach, Swansea’s Beach Fatigue (formerly known as Heavy Petting Zoo) are on fine form; cuts like ‘Crash’ show their boundless and insatiable energy. Beach Fatigue boast a formidable noirish bass-driven rock sound like The Cramps colliding with the vengeance of early Yeah Yeah Yeahs. Striding the stage like the ringmaster, Amy’s vocals twisting and curling on a thrill-ride roller coaster to destruction. It’s clear that Beach Fatigue have improved in the few years. At the end of the day, they are the best show in town at Swn 2015.