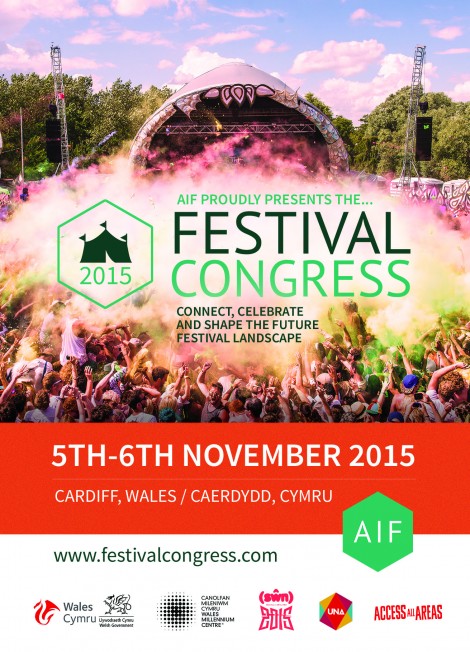 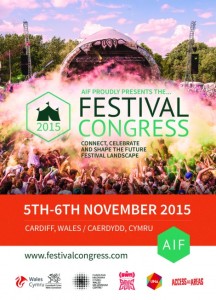 Earlier this month, a group of GIITTV adventurers landed in Cardiff for AIF’s second annual Festival Congress. We watched, we listened, we heard stories about feeding Chuck Berry heated up service station Gingsters, turning down Ed Sheeran’s offer to play a festival in exchange for a cigarette and booking a headliner 48 hours before the gig. Joking aside, we learnt a lot about the festival industry and witnessed the launch of important campaigns. So you’ve ever had questions about festivals or just wondered what happens at trade events, here is your chance to enter into our newfound festival wisdom.

Eleven million (15%) of UK live music attendees are deaf and disabled. For over 15 years, Attitude is Everything (AiE) has been helping improve access to live music for this group of music fans. Launched on the first day of the Congress, their latest campaign ‘Access Starts Online’ is helping AIF member festivals to offer dedicated online information support for deaf and disabled.  More information about ‘Access Starts Online’ can be found HERE.

Ever thought what you might hear in space? Picked up by radio telescopes, the sounds of Russian Sputnik and Luna 2 Rocket, Huygens Lander landing on Titan and the mysteriously named proton whistlers were all part of a presentation given by Jodrell Bank’s Professor Tim O’Brien (University of Manchester). And if that’s not enough to get you into science, how about the sound of the first million years of the universe squeezed into 10 seconds? Click HERE to listen to ‘Hello Moon Can You Hear Me’, the result of Prof Tim O’Brien’s collaboration with music producers Jim Spencer and David Tolan.

What is the future of festivals? Rather than competing against each other, festivals are now pitched against tourism, watching TV and other leisure time activities. 21st-century festivals are about the experience rather than any individual acts, and rarely about headliners. In fact, many established events are able to sell early tickets prior to any line-up announcements. Micro stages, pop-up venues, later licensing, add-on experiences (e.g. Wilderness) are all things we’re likely to see at festivals over the next few years.

The Musicians’ Union (MU) introduced an AIF partnership campaign to establish clear and fair deals for emerging artists. ‘The Fair Play for Festivals’ agreement is designed to give artists and AIF members practical guidance in areas such as promotion, advance information and pay. More information about ’The Fair Play for Festivals’ can be found HERE.

City festivals are a great way of boosting the local scene and promoting new artists. Staging a city event may sound easy but the reality is that having to position yourself in the context of an already existing infrastructure is as much a poisoned chalice as an advantage. Lack of venues (or lack of venues of certain capacity) can also be an issue. And if you do succeed, eventually you’re faced with a choice of moving out of smaller venues and into open spaces, which invariably leads to more licensing headaches and costs. However, moving to a new site can provide a huge boost to the event. Last year’s Liverpool Sound City move into the docklands regeneration area was met with almost universal approval. It also gave the festival a chance to have more control, from retaining 100% of their bar income to being able to introduce additional elements that would have been impossible in the inner city setting.

There are over 3.7 million summer festival goers in the UK alone. Environmental impact is a big issue. Anyone who’s been to a festival would have come across mountains of waste, abandoned tents and unholy smells of chemical portaloos. At present Shambala is the only UK festival using 100% renewable energy. Recycling rates are frighteningly low and many events generate colossal amounts of waste. Powerful Thinking, the not-for-profit industry group for environmental action, is set to publish a comprehensive report and roadmap for the UK festival industry. You can sign up to receive your copy of the ‘Show Must Go On’ report HERE.

Despite priding itself as the most sophisticated market in the world, UK festivals still lag behind their European counterparts when it comes production and backstage hospitality. Lack of reliable WiFi, inadequate line check times and almost no interest in feedback are all familiar features of UK events.

Is engagement worth anything? The likely answer is probably not something social media marketing executives would want to hear. The good news, however, is that when it comes to advertising Facebook and email are still the best ways to get heard. If you’re after younger audiences Instagram should be part of your arsenal, with Snapchat fast becoming another favourite.

According to AIF, UK now has over 975 festivals. So how do you make your event stand out? The answer is good PR. Market space, proposition, ability to gain competitive advantage and trust are all critical questions in any PR campaign. And if it all sounds like common sense sprinkled with a bit jargon, then you only need to ask a journalist how often they come across examples of bad PR.

Given its size and financial position, it was disappointing to hear that Glastonbury is one of a small number of established festivals that don’t pay emerging artists. By and large, festivals are not just providing access to new audiences but keep many artists afloat financially. But aside from the money, what makes artists and their managers choose one festival over another? Attractive stages and times, good security staff, competent stewards and sound crews, more artist-focussed publicity, reliable WiFi and backstage fans/heaters were all factors affecting those all-important booking decisions. Unsurprisingly, exclusivity clauses imposing a restriction on the gigs the artist can play in certain locations within a specified period of time were unanimously recognised as the most unappealing part of artists’ festival experience.