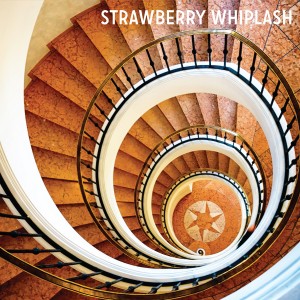 Strawberry Whiplash are a Glaswegian duo, signed to Californian label Matinee Records, and ‘Time Takes You Away’ is a sunny slice of fuzz pop from their second album Stuck In The Never Ending Now, released 20th November.  Following Glasgow’s fine lineage of janglesome bands such as The Pastels, Belle & Sebastian and early Primal Scream, ‘Time Takes You Away’ is a highly infectious track that burrows its way into your consciousness after only one listen. Fans of those bands are advised to investigate immediately.

Laz takes care of instrumentation while Sandra looks after vocal duties in the band, who have released a clutch of singles and one other album for Matinee, the brilliantly-named Hits in the Car back in 2012.

‘Time Takes You Away’ could almost be a lost early Creation Records single, and it could also be the most insistently catchy song of 2015; really, it is that good.